Accessibility links
Dems Make History. Now Comes the Hard Part Democrats take control of Congress promising to push through an aggressive agenda. But a razor-thin margin gives Democrats little legislative leeway in the Senate, and the party remains divided over an issue that was key to their electoral victory in November: what to do about Iraq. 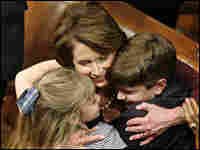 Nancy Pelosi (D-CA) hugs two of her grandchildren during a swearing-in ceremony for the 110th Congress. She is the first woman in history to be elected speaker of the House. Mark Wilson/Getty Images hide caption 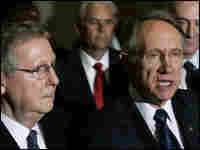 Senate Majority Leader Harry Reid (D-NV) and Minority Leader Mitch McConnell (R-KY, at left) have promised "an era of good feelings" -- but that could dissipate if a battle for control of the Senate erupts over Sen. Tim Johnson's (D-SD) health. hide caption

History is always in the making when a new Congress is sworn in, and that is especially true for the 110th Congress. It is the first time in 12 years that both chambers will be controlled by the Democrats. And it is the first time in history that a woman -- Nancy Pelosi of California -- has been chosen as speaker of the House.

Pelosi was wall-to-wall smiles all day.

"Today we make history," she said at Thursday's swearing-in ceremony. "Today we change the direction of our country."

It was a joyous occasion for House Democrats, who have chafed at GOP rule these past dozen years, and who felt ignored and shunted aside during the crafting of crucial legislation. While partisanship and acrimony are undoubtedly likely to resume, for this day at least, there was optimism and joy.

A Changing of the Guard

At times, the House chamber looked like a day-care center, teeming with children and grandchildren attending the opening ceremony.

But there were old faces as well. Tom Foley (D-WA, 1965-94), the last Democratic House speaker, was in attendance, along with other names from the Democrats' past, such as Martin Frost of Texas and Vic Fazio of California.

Dennis Hastert (R-IL), the outgoing speaker -- who served longer than any other Republican House speaker in history -- was literally a backbencher: He sat in the back of the chamber and was all but ignored, except for occasional mentions by Pelosi and the new Republican minority leader, Ohio's John Boehner.

The mood was not as dramatic in the Senate, which the Democrats last controlled in 2001-02, following the defection from the GOP of Vermont Sen. James Jeffords. Harry Reid of Nevada is the new majority leader. Mitch McConnell of Kentucky, who served as whip under the now-retired Bill Frist of Tennessee, is the new minority leader. And visages from the past also resurfaced in the Senate chamber: Accompanying Amy Klobuchar, the newly-elected senator from Minnesota, was former senator (and vice president) Walter Mondale.

But for all of Thursday's pomp and ceremony, there are serious issues that will come before Congress -- and no guarantee how much will be signed as legislation.

Pelosi has an ambitious agenda, much of which she hopes will pass in what she calls the "First 100 Hours." She plans a major overhaul of ethics legislation, starting with a ban on gifts and meals from lobbyists. Voters made it clear during the midterm elections that they saw ethics as an important issue -- one that helped the Democrats take over Congress.

There will also be a move to make the process of earmarks -- pet projects slipped into legislation by lawmakers -- more transparent.

Next week, the agenda includes raising the minimum wage, passing stem-cell research legislation, implementing the recommendations of the 9/11 Commission, renegotiating the price of prescription drugs, and cutting back tax breaks for the oil industry.

The aggressive Democratic agenda has House Republicans apoplectic, claiming they're being pushed aside.

Minority Leader Boehner, new Republican Conference Chair Adam Putnam of Florida, and outgoing House Rules Committee chair David Dreier of California, among others, have complained that by bypassing them, Democrats are violating their pledge to make the House more open and more democratic -- with a lowercase "d."

But these GOP complaints are the same ones that Democrats have made against Republicans during much of the past 12 years. (They also echo what Republicans long said about Democrats prior to 1994, when the GOP won control of the House for the first time in 40 years.)

And even if the Democrats' legislative issues manage to pass in the House, there is still the Senate to consider.

There were 55 Republicans in the last (109th) Senate, and yet much did not get done. The Democratic majority in the new Senate is even smaller: just 51 seats. So despite Pelosi's (and the Democratic House leaders') lofty goals, getting the Senate to go along may be more problematic.

One example: a minimum-wage increase. That may very well pass the House, without any GOP input or amendments. But in the Senate, look for Republicans to insist on tax breaks for small businesses to make up for part of the cost.

Another problem that may not be resolved any time soon is Iraq.

But the Democratic Party is hardly united on what to do about Iraq. Democrats are being pulled in two directions: by those who want U.S. troops out immediately, and by those who fear that a pullout would leave Democrats open to the charge that they are weak on foreign policy and national security.

A good example of the Democrats' dilemma came on Wednesday. As Rep. Rahm Emanuel (D-IL), the new Democratic House caucus chair, held a press conference about his party's plans to overhaul ethics rules, he was interrupted by a band of antiwar activists led by Cindy Sheehan. The protesters demanded that Congress cut off funds for Iraq and pullout U.S. troops.

It was Iraq, and the anger and frustration of voters over the U.S. engagement there, that was as responsible as anything for Pelosi becoming speaker of the House. But Democrats acknowledge that resolving the issue is not likely to happen soon. As Pelosi indicated Thursday, Congress will wait to hear from President Bush before acting on what to do. Mr. Bush could announce his plans as soon as next week, and is expected to address the issue as well during the State of the Union address on Jan. 23.

One tool that Democrats now have at their disposal -- which they lacked in the minority -- is subpoena power and the ability to open investigations, hold hearings and bring administration officials in to testify. Sen. Carl Levin (D-MI), the new chair of the Armed Services Committee, has said he will summon Robert Gates, the new secretary of defense, to testify before his committee shortly after the president addresses the nation on his plans for Iraq.

Precarious Control of the Senate

One more unresolved matter, this of a personal nature, is the health of Sen. Tim Johnson. The South Dakota Democrat is still in intensive care following brain surgery.

Julianne Fisher, a Johnson aide, was quoted as saying there have been no discussions about a possible resignation.

"We need to give him some time," she said.

The likelihood is that, for the foreseeable future, the Senate will operate with 99 members: 49 Republicans and 50 Democrats -- including a Democratic-leaning independent from Vermont (not to mention the "independent Democrat" Joe Lieberman of Connecticut). That still gives Democrats control.

The Senate has no power to decide Johnson's fitness to serve. But if he were to die or resign his seat, then the Republican governor of South Dakota would name a successor, one likely to be a fellow Republican. Such a scenario would mean a 50-50 Senate, with Vice President Cheney there to break the tie.

And if that happened, would Republicans demand that control of the Senate revert back to them? (That is what happened when Jeffords' switch pushed the Senate from GOP to Dem control.) Whatever "era of good feelings" that Reid and McConnell have promised this week could quickly dissipate.

In fact, a situation in the House already threatens to accelerate the acrimony: the contested seat in Florida's 13th Congressional District. Republican Vern Buchanan, who was certified the winner of the seat by the state of Florida, was sworn in along with all the other members on Thursday.

But Christine Jennings, the Democratic candidate, has pursued an appeal, both to the House Administration Committee and through the courts. Her argument is that the apparent failure to count some 13,000 votes in Sarasota County means that the election was flawed and that a new election should be held. If the Democratic majority in the House agrees with her, the place would explode.