Accessibility links
Patrick Takes Office in Massachusetts Massachusetts Gov. Deval Patrick is sworn in as the second elected black governor in U.S. history. He took the oath of office with a Bible given to John Quincy Adams by survivors of the slave ship Amistad.

Massachusetts Gov. Deval Patrick is sworn in as the second elected black governor in U.S. history. He took the oath of office with a Bible given to John Quincy Adams by survivors of the slave ship Amistad. 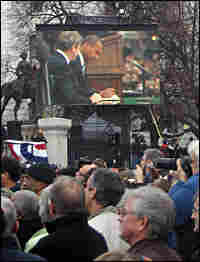 Crowds turned out to watch Deval Patrick's historic inauguration. He is the second African-American to be elected governor of a state. Patrick insisted on holding the ceremony outside to mark a new era of transparent government in Massachusetts. Tovia Smith, NPR hide caption

The ceremony of a new Congress here in Washington, may have stolen a bit of attention from a historic ceremony in Massachusetts. Deval Patrick has become the state's first black governor and only the second ever elected in the United States. He was sworn in yesterday in an outdoor ceremony meant to emphasize the inclusiveness that he hopes will mark his administration. NPR's Tovia Smith has more.

TOVIA SMITH: It may have been untraditional but Governor Patrick's inauguration was rich in symbolism:

SMITH: Ladies and gentlemen, the governor of the commonwealth of Massachusetts, Deval Al Patrick. Admit the governor.

SMITH: On the steps outside the statehouse, lawmakers in their winter coats convened in special session. The governor insisted on being sworn in outside as a first step toward making government more accessible and more transparent. And he took his oath of office with his hand on a bible once owned by Africans on a slave ship called the Amistad.

DEVAL PATRICK: I am descended from people once forbidden their most basic and fundamental freedoms. A people desperate for a reason to hope and willing to fight for it. And so are you. Because the Amistad was not just a black man's journey, it was an American journey.

SMITH: Watching from the side was Douglas Wilder, the nation's first elected black governor and now mayor of Richmond, Virginia.

DOUGLAS WILDER: I was elected 17 years ago and I never thought we'd have to wait 17 years to see this take place.

SMITH: Many in Massachusetts saw it as a sign of progress - that race never became an issue in the governor's campaign. But it did matter yesterday to many of the thousands who gathered outside to watch the governor's inauguration.

AUDREY STURGIS: I am trying not to cry as I'm standing here talking to you. I don't know how we're going to get through this day.

LOUISHA MCCONNICKLE: I started crying because I just got (unintelligible) and everything about what Deval Patrick do. And it's just so great to see an African-American up there. If I wanted to achieve something in life, I know that I can do it if Deval Patrick did.

SMITH: Governor Patrick called his journey an improbable one. From the Southside of Chicago - as he put it, a place where hope withers - he got a scholarship to a prep school in Massachusetts and went on to Harvard and then to top jobs in the Clinton administration and Fortune 500 companies. His run for governor was first and he started as a long shot. But he ran a grassroots campaign, relentlessly positive and impassioned, and he won in a landslide, ending 16 years of Republican governors in this decidedly liberal state.

PATRICK: It's time for a change and we are that change.

SMITH: So while Patrick talks of high expectations, he's also been asking for patience and understanding.

PATRICK: As an American, I am an optimist - but not a foolish one. We know that our challenges were long in the making and will require long-term solutions.

INSKEEP: You're listening to NPR News.