Accessibility links
Changes Coming in U.S. Military Command for Iraq Reports say President Bush's new Iraq strategy is likely to be carried out by new commanders. Media reports say the president will replace the two top generals in the region.

Admiral William J. Fallon on a visit to the U.S. Embassy in Phnom Penh, Cambodia, in July 2006. hide caption 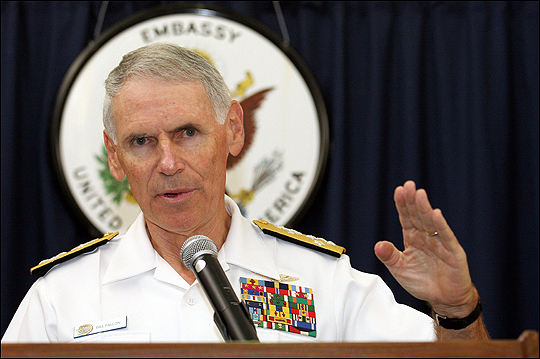 Admiral William J. Fallon on a visit to the U.S. Embassy in Phnom Penh, Cambodia, in July 2006. 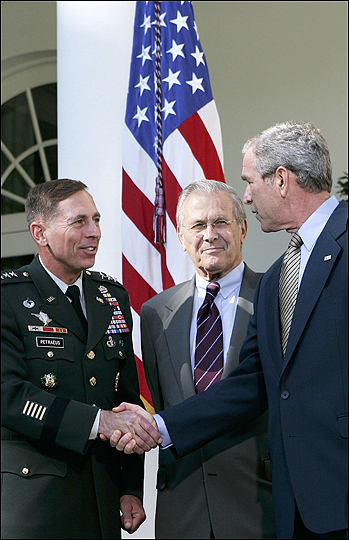 Reports say President Bush's new Iraq strategy is likely to be carried out by new commanders.

Media reports say the president will replace the two top generals in the region.

It was announced in December that Gen. John Abizaid would step down as top commander of troops in Afghanistan and Iraq.

His replacement will be Adm. William Fallon, currently the top U.S. commander in the Pacific.

Meanwhile, the commander on the ground in Iraq is also changing, with Army Lt. Gen. David Petraeus -- who at one time was in charge of training Iraqi security forces -- taking the place of Gen. George Casey.

Military, Diplomatic Changes Ahead for Iraq

The president also planned to replace his two top generals in Iraq, according to media reports.

Bush next week will unveil his strategy, which is expected to entail new political, military and economic steps to win the war. The military approach, which has attracted the most attention and skepticism from Congress, is expected to include an increase in U.S. forces, possibly 9,000 additional troops deployed to the Baghdad capital alone.

"One thing is for certain: I will want to make sure the mission is clear and specific and can be accomplished," Bush said Thursday.

Before the president provides more details, however, he is putting in place a new team to help oversee his Iraq policy.

Gen. John Abizaid, the top U.S. commander in the Middle East, and Gen. George Casey, the chief general in Iraq, are both expected to leave their jobs in coming weeks.

Also, retired Vice Adm. Mike McConnell, a veteran of more than 25 years in intelligence, was to be named Friday by Bush to succeed John Negroponte as national intelligence director, said a senior administration official who spoke on condition of anonymity because the decision was not yet public.

Sen. Daniel K. Inouye (D-HI), a member of the Senate Defense appropriations subcommittee, told The Associated Press on Thursday that he understands Bush wants to appoint Fallon to head the U.S. Central Command, a position responsible for directing the wars in both Iraq and Afghanistan.

"He's highly knowledgeable and well-educated and respected," Inouye said of Fallon. "I would think that his nomination, if the president is to submit it, would go flying through."

Each of the personnel changes comes on the heels of Defense Secretary Robert Gates replacing Donald H. Rumsfeld, the architect of the unpopular war.

Besides ushering in new personnel, Bush on Friday was to discuss his plans for the Iraq war privately with more than a dozen senators, a list that includes some of his biggest critics, as well as his most ardent supporters.

Briefings with lawmakers were expected to continue through next week, culminating in a meeting with bipartisan leadership on Wednesday, according to lawmakers and aides.

Bush spoke with Iraqi Prime Minister Nouri al-Maliki in a secure video hookup for nearly two hours Thursday. The president said he sought assurances from al-Maliki that he would do what's necessary to protect Iraqis against rising sectarian violence.

"I believe Prime Minister Maliki has the will necessary to make the tough decisions," the president said.

Bush appeared Thursday with German Chancellor Angela Merkel and recounted some of his discussions with al-Maliki. The president said he talked with the prime minister about the final moments of Saddam Hussein's life, when the deposed Iraqi leader was taunted before being hanged Saturday and then filmed dangling from a rope.

"My personal reaction is that Saddam Hussein was given a trial that he was unwilling to give the thousands of people he killed," Bush said. "I wish, obviously, that the proceedings had gone on in a more dignified way."

One option being considered by Bush includes sending 8,000 to 9,000 more troops to Iraq, primarily to reinforce Baghdad. There are roughly 140,000 troops in Iraq.

Lawmakers said Thursday they were skeptical of such a plan.

"My conclusion was that it would be a mistake to send more troops to Baghdad," said Sen. Susan Collins, R-Maine. "I think

the sectarian violence there requires a political not a military solution."

This concern was echoed by Abizaid in testimony on Capitol Hill in November. He said 20,000 more troops could be deployed, but that the Army and Marine Corps are too taxed to sustain the increase for long.

Giving Fallon and Petraeus the top military posts in the Middle East would help Bush assert that he is taking a fresh approach, and help pave the way for him to turn policy there in a new direction.

As with Abizaid, Casey also has expressed reservations about the potential effectiveness of boosting troop strength in Iraq. He told reporters in Iraq last month that he is "not necessarily opposed to the idea" of sending in more troops, but said any increase would have to "help us progress to our strategic objectives."

Given the need to reduce high unemployment and draw Iraqis away from Shiite militias and the Sunni insurgency, the president is considering loans to businesses. He is looking at getting Iraqis into short-term jobs by proposing a significant increase in the discretionary funds that military commanders can use for reconstruction projects.