Accessibility links
Bush Reshuffles Diplomatic, Military Teams for Iraq President Bush announced changes Friday that replace many of the top officials for Iraq policy. The high-level moves, which span the intelligence, diplomatic and military fronts, come as the president prepares to unveil a new Iraq strategy. 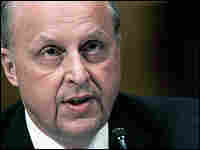 John D. Negroponte steps down as the nation's first director of national intelligence to become top deputy to Secretary of State Condoleezza Rice.

Experience: Director of national intelligence, April 2005-present; served in the 1980s and '90s as ambassador to Iraq, the United Nations, the Philippines, Mexico and Honduras and as deputy national security adviser and deputy assistant secretary of state, East Asian and Pacific affairs, in the 1980s. 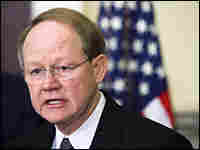 Retired Navy Vice Admiral John M. (Mike) McConnell is President Bush's choice to be the next director of national intelligence. 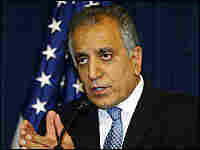 Zalmay Khalilzad, U.S. ambassador to Iraq, is expected to be President Bush's choice to become envoy to the United Nations, replacing John Bolton. 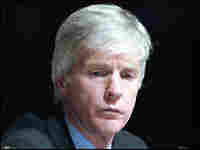 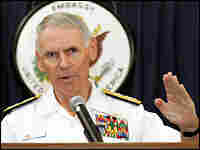 Navy Adm. William J. Fallon, the top U.S. military officer in the Pacific, is expected to replace Gen. John P. Abizaid as head of U.S. Central Command, which oversees all military operations in the Middle East. 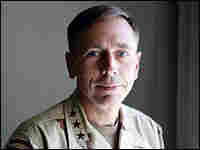 In a high-level reshuffling of his Iraq team, President Bush on Friday announced replacements for many of the top officials responsible for war policy. The changes come as Mr. Bush prepares to unveil a new strategy — expected next week — for a war that has become deeply unpopular at home.

Major Changes in Areas of Diplomacy and Intelligence

The personnel changes start with John Negroponte, who will give up his post as the nation's first director of national intelligence, a job created by Congress after the attacks of Sept. 11 to coordinate the country's 16 spy agencies. During his 20 months on the job, he's received mixed reviews.

Negroponte leaves to become the top deputy to Secretary of State Condoleezza Rice. It is a step down from the Cabinet-level post of spy chief, though he cast it as a homecoming of sorts.

"It will be a great privilege for me to come home to the department where I began my career and rejoin a community of colleagues whose work is so important," Negroponte said, after the president nominated him for the State Department job.

Negroponte has deep roots in the State Department and has served as ambassador to, among other places, the United Nations and post-U.S. invasion Iraq. His portfolio at the State Department will include overseeing policy for Iraq and North Korea. Analysts say Negroponte will be a diplomatic heavyweight for Secretary Rice, who has been lacking a deputy since last July.

The man Mr. Bush has tapped to replaced Negroponte is retired Navy Vice Admiral Mike McConnell, who directed the National Security Agency from 1992 top 1996 and also served as an intelligence adviser under the first President Bush. McConnell spent more than 25 years in the intelligence community. For the past decade, he has worked at the firm of Booz Allen Hamilton, directing its consulting efforts in military intelligence for the Pentagon.

Bush said he was confident that McConnell would give him "the best information and analysis that America's intelligence community can provide."

President Bush is also expected to name the U.S. ambassador to Iraq, Zalmay Khalilzad, as his envoy to the United Nations. An Afghan-born Sunni Muslim, Khalilzad has been a very public figure, trying to push for reconciliation among Iraqi sects and factions. He's likely to be replaced by career diplomat Ryan Crocker, the current ambassador to Pakistan, who also has experience in post-Saddam Hussein Baghdad.

Analyst Daniel Serwer of the U.S. Institute of Peace served as executive director of the Iraq Study Group. He says Khalilzad will try to work with the United Nations for more international help. And he says he expects Negroponte to bring a realistic, hard-nosed assessment of Iraq to the State Department.

Serwer says the diplomatic shuffling has created a strong team. But he says the real test will be what sort of diplomatic strategy President Bush puts forward.

"If you don't put a strategy forward with a strong diplomatic component," Serwar says, "having Zal [Khalilzad] at the U.N., or Negroponte as deputy secretary [of state] is going to make a whole lot less difference."

The Iraq Study Group, an independent, bi-partisan committee established by Congress to study the current situation, recommended a big diplomatic push to reach out to Iraq's neighbors, including Iran and Syria, something the Bush administration has been reluctant to do so far.

Whatever new direction the president unveils for Iraq, it will be carried out by new commanders.

Mr. Bush is nominating Navy Adm. William Fallon to replace Gen. John Abizaid as the head of U.S. Central Command, which oversees U.S. military operations across the Middle East. The choice of Fallon is surprising: A naval officer with little experience in the Middle East, he will be leading two ground wars, in Iraq and Afghanistan.

Still, Fallon brings to the table a great deal of combat experience: A trained fighter pilot, he served in Vietnam and in the 1990 Gulf War. He is one of nine U.S. combatant commanders in the world and is currently the top U.S. military commander in the Pacific Rim. In some ways, the move to CENTCOMM is a lateral move, though the job is more visible.

In 2003 and early 2004, Petraeus was fairly successful in tamping down violence in Mosul using unconventional methods. In one famous raid in late 2003, Petraeus' forces arrested some three dozen insurgents firing just a single shot. But Petraeus' achievements proved difficult to replicate elsewhere in Iraq.

Analysts say the new generals are not likely to oppose an increase in the level of U.S. troops in Iraq — something many believe President Bush will propose as part of his revised Iraq strategy.

Mr. Bush is expected to call for an increase of 10,000 to 20,000 ground forces, by extending the stay of troops already in Iraq and accelerating the scheduled deployment of new forces.