Accessibility links
Artists Make Noise on Beijing's Fringe China's capital is now home to a thriving community of rock 'n' roll rebels and subversive artists. Despite censorship and other obstacles, Beijing has a livelier alternative cultural scene than in any other Chinese city. 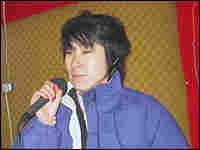 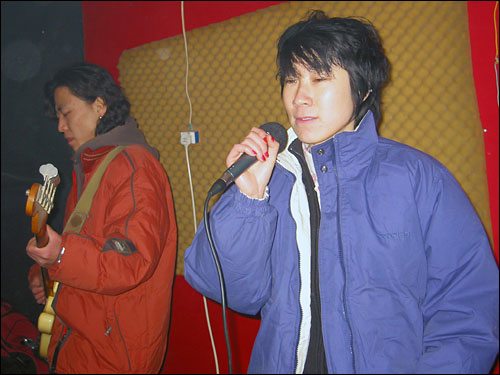 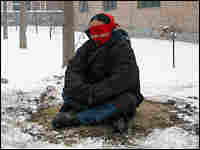 Artist Kuang Laowu performs a work of art entitled "Shut" during an exhibit at the Songzhuang artists' colony. The Chinese character for "shut" is written on the red cloth wrapped around his eyes, ears and mouth. Anthony Kuhn, NPR hide caption 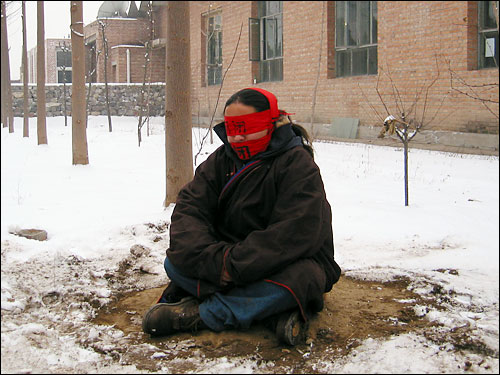 Artist Kuang Laowu performs a work of art entitled "Shut" during an exhibit at the Songzhuang artists' colony. The Chinese character for "shut" is written on the red cloth wrapped around his eyes, ears and mouth.

"The sky is high and the emperor is far away." The logic of the traditional Chinese saying is that the farther you are from the capital, the freer things are.

But in reality, a lot goes on in Beijing, right under the "emperor's" nose. Today's Beijing is home to rock 'n' roll rebels, subversive artists and a livelier alternative cultural scene than in any other Chinese city.

A recent visit to Beijing's suburban Tongzhou district, which attracts many artists with its cheap rents and grungy cachet, proves just how edgy some pockets of the once-staid capital have become.

Take the Subs, a local punk band. Lead singer Kang Mao recently traded in her puffy afro for a just-got-out-of-bed hairdo. She wears blue contact lenses on her brown eyes. Underneath her friendly exterior lurks a ferocious set of vocal cords.

Kang, 27, is a native of northwest China's Lanzhou city. She says she moved here to pursue her rock 'n' roll dreams.

"Most big cities in China have rock bands, but they don't have supportive environments. Beijing is like Seattle. It's a good place for rock bands to test themselves. If you're gold, you'll shine here," she says.

But there's plenty in Beijing for young rockers to rebel against, too: the old ladies of the neighborhood watch, for example.

"When I walk past them, they silently fix their gazes on me. As soon as I pass, they all huddle together. Why does it have to be like that? Most people have a different aesthetic than I do. They can't look at me with an open mind. They look at me like I'm a freak," Kang says.

In Tongzhou, a dozen performance artists gather at a former duck farm that has been turned into an exhibition space. It is part of an artists' colony called Songzhuang.

In one work, "For the World's Persecuted Peoples," an artist stacks piles of mannequins' body parts bound in burlap bags. He rolls naked on the floor, shouting in anguish.

In another performance, a young artist in red underwear lies on a black box surrounded by red candles. He holds a knife in his mouth. Members of the audience drip hot candle wax on the artist's face, sealing his mouth shut. The artist stands up, cuts off his clothes with another knife and lacerates his chest and legs, smearing the blood over his body.

The artist, who goes by the stage name of Guazi, explains his performance.

"The knife has silenced me. But I still want to speak out. So I use another knife to tell people what I want to say through my blood and the destruction of my own body," he says.

Artists here say that Beijing's arts scene is lively because the capital has a critical mass of other artists and cultural influences -- not because it is China's most freewheeling city. The government allows these artists to create as long as their influence is limited to the periphery of the cultural world. And that, the artists say, is a place they're content to be.