Accessibility links
New Year Is Time for Tapas To stave off the January blues, Betsy Block and her husband decided to throw a tapas party. The Spanish small-plate dishes were so easy to make that cleaning the house ended up being the most difficult part of preparing for the soiree.

New Year Is Time for Tapas

New Year Is Time for Tapas 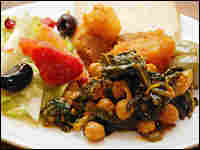 A plate of chickpea and spinach stew, potatoes and chorizo, Valencia orange and pomegranate salad and other Spanish tapas. Scroll down for recipes and more photos. Andrew Pockrose hide caption 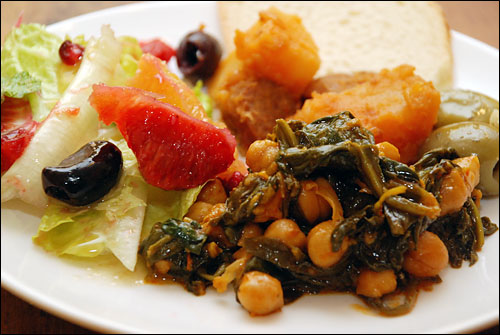 A plate of chickpea and spinach stew, potatoes and chorizo, Valencia orange and pomegranate salad and other Spanish tapas. Scroll down for recipes and more photos. 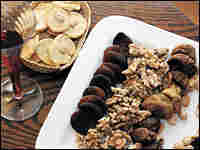 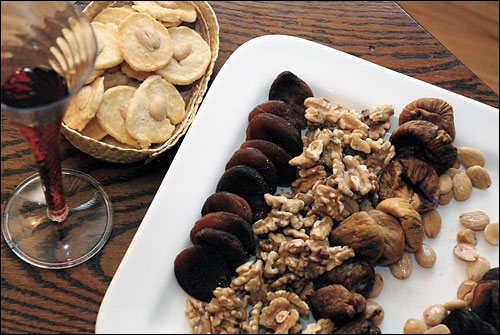 Add nuts, dried fruit and wine for a perfect evening of tapas.

Betsy Block, a Boston-based freelance writer, is a regular contributor to Kitchen Window and the voice of the blog Mama Cooks. She is writing a book about kids, food, and the meaning of life (not necessarily in that order), which will be published by Algonquin Books.

In an effort to start the year right and stave off the January blues, my husband and I thought we'd throw a mid-winter tapas party.

"The art of tapeo is like a baroque, sybaritic game," I read in The Oxford Companion to Food. "[I]t induces states of inspiration and delight, it gives rise to witty banter on trivial topics and the interchange of snippets of juicy gossip."

Tapa means "lid" in Spanish, I learned from celebrity Spanish chef Jose Andres' Tapas: A Taste of Spain in America. One story goes that tapas got their start from the practice in Spanish bars of placing something, such as a slice of ham, on top of a glass to protect a drink from flies. This may or may not be true, he adds.

From there, tapas came to refer to small dishes eaten as a prelude to dinner, traditionally accompanied by wine or dry sherry. What started out simple — a few olives, anchovies or mussels — eventually encompassed anything at all, as long as it was served on a small plate.

When tapas crossed the ocean to the United States, their form changed somewhat. Rather than appetizers, tapas became dinner. It was just the thing for this nation of grazers.

Our party was definitely in the American mode. Tapas are served in Spain from about noon to 3 p.m. and again from 7 p.m. to 10 p.m., traditional American meal times. The Spanish don't usually eat dinner before 10 p.m.

We also expected to have a passel of children at our party, something you would be unlikely to find at either an upscale, late-night restaurant meal in the United States or at a Spanish tapas bar.

With invitations already in the mail, I started scouring cookbooks for recipes. We needed balance — meat, seafood, vegetables — and we needed to be able to make some dishes ahead of time so we wouldn't be working too hard once our guests arrived. And we wanted a variety of flavors and textures that all went well together. So we settled on the six recipes below, along with good bread, dried fruit, nuts and olives.

We also poured a couple of bottles of cava (Spanish sparkling wine) and a Spanish rose, in the hopes they would help with the juicy gossip and witty banter.

The hardest part of preparing for the party turned out to be cleaning the house before our guests arrived. The food was so good that some of these recipes, doubled, will become part of our regular weeknight repertoire.

Our guests were happy. One said, "I know these are tapas, but I'm not taking tapas-sized portions." Another friend, a picky eater, reported on his way out the door that he'd had four servings of the chickpea and spinach dish.

This first tapas party went so well that next time, we might make things even easier and do it as a potluck. You can't get more American than that. 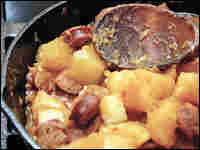 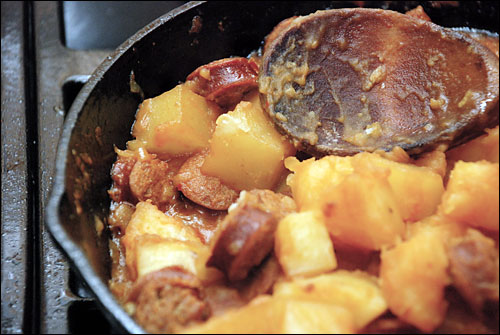 This recipe is adapted from Tapas: A Taste of Spain in America by Jose Andres.

Warm the olive oil over low heat in a large, shallow pan. Add the garlic and cook until lightly browned, about 1 minute.

Add the onions and cook, stirring occasionally, until they are soft and tender and have turned a light brown color, at least 20 minutes. You want the onions to caramelize. If they start to get too dark, add 1/2 tablespoon of water to keep them from burning.

When the onions are caramelized, add the chorizo and continue frying until it, too, is browned, about 2 minutes. Place the potatoes in the pan and stir to coat them in the oil. Cook for 10 minutes.

Add the paprika and the salt, add water to cover, and bring to a boil. Once it reaches a boil, reduce the heat to low and simmer until the potatoes are cooked through and the water has reduced by half, about 20 minutes. 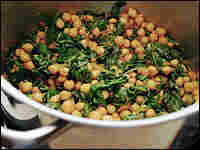 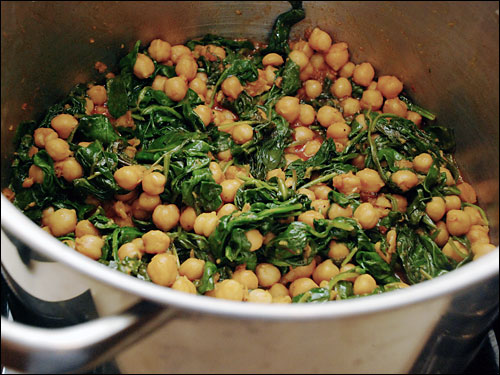 This recipe is adapted from Tapas: A Taste of Spain in America by Jose Andres (with Richard Wolffe) (Clarkson Potter 2005).

2 tablespoons pimenton (Spanish sweet paprika, although we used Hungarian sweet paprika — not hot — since we couldn't find Spanish; no one complained)

Salt and white pepper to taste

Remove the pan from the heat and allow it to cool for a few minutes. Add the paprika, saffron and cumin to the pan, and then immediately add sherry vinegar to prevent the paprika from burning. Leave the pan off the heat.

With a mortar and pestle, smash the reserved garlic and the toasted bread to make a very thick paste.

Bring the chickpeas and their liquid to a low boil (add some water as needed, in order to have enough liquid to cook the spinach) and add the spinach. Simmer for 5 minutes. Add the paprika mixture along with the bread-garlic paste. You should have a thick, stewy sauce. Season with salt and white pepper to taste and serve immediately. 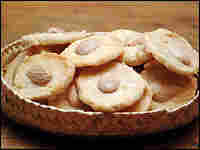 This recipe is adapted from The New Spanish Table by Anya von Bremzen (Workman 2005). Spanish Marcona almonds are available at specialty stores. They have a slightly different taste and shape than other almonds.

1/2 teaspoon salt, plus more for the egg wash

In a stand mixer fitted with the paddle attachment, mix the butter and cheese until well combined. Scrape down the side of the bowl and add the flour and salt. Mix on low speed until the dough just comes together.

Turn the dough out onto a piece of plastic wrap and form it into a log 1 1/2 inches in diameter. Wrap the dough log in plastic and refrigerate until firm, at least 1 hour or up to 4 days. (It can also be frozen for up to 1 month.)

Slice the dough into 1/4-inch-thick coins and place them on the prepared sheets at least 1 inch apart. Mix the egg and a large pinch of salt together, then brush the crackers with this egg wash. Press an almond on top of each cracker, then bake until golden and firm, about 15 minutes. The crackers will keep in an airtight container for several days. 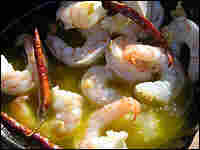 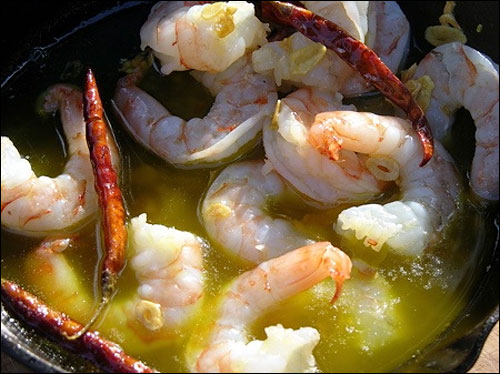 I begged this recipe from a server at Dali, another Boston restaurant.

Heat the first four ingredients over medium heat for about 5 minutes, or until the garlic is nutty and starts turning slightly brown.

Add the shrimp and cook until just done, a minute or two depending on their size. Squeeze in some lemon and serve sizzling hot accompanied by good bread. 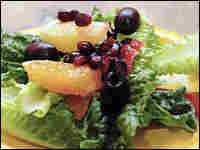 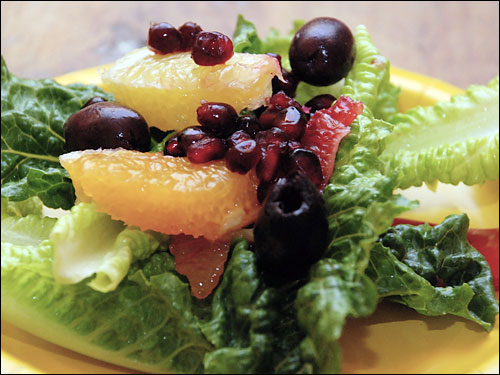 This recipe is adapted from Tapas: A Taste of Spain in America by Jose Andres.

4 oranges (we used what looked best at the store, including blood oranges for color)

Slice the pomegranate in half. Turn one half face down over a large bowl, and hit the back of it with a large spoon. The fleshy seeds will fall into the bowl. Repeat with the other half. Remove the white pith and set the seeds aside.

Peel the oranges and remove the bitter white pith. Cut them into segments and set aside.

In a small skillet, heat 1 tablespoon of the olive oil over a very low flame. Add the garlic and saute until soft, about 3 minutes (do not let it brown). Place the garlic in a blender, add the remaining 7 tablespoons of olive oil and the sherry vinegar, and mix until thoroughly blended. Add salt to taste.

In a serving bowl, mix the lettuce with the reserved orange segments and pomegranate seeds. Add the olives and the dressing and toss. Sprinkle with the chives, and serve. 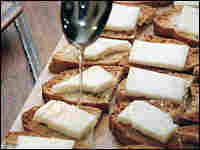 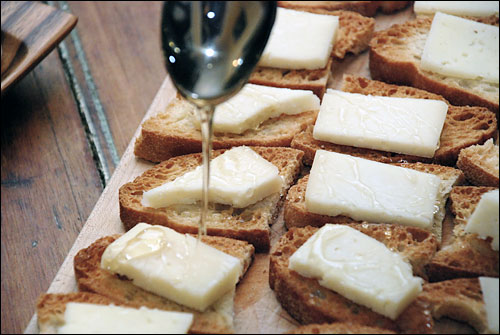 This recipe was inspired by a tapa my husband and I had at Toro, a restaurant in downtown Boston. It's absurdly easy (as long as you can find the right cheese), but unbelievably delicious.

1/4 to 1/2 pound Navat cheese, or another mild, semi-hard Spanish goat or sheep's milk cheese (we couldn't find Navat so we tried Patacabra, which worked well)

Brush the bread with olive oil, then toast or grill it. Cover with a slice of cheese and drizzle with honey.