Accessibility links
The YouTube Candidate: John Edwards Not only did Democratic presidential hopeful John Edwards announce his candidacy on YouTube, he is drawing on that Web site's style for his own Internet site. The page features videos of a casual Edwards, kicking back and just talking to the camera.

Not only did Democratic presidential hopeful John Edwards announce his candidacy on YouTube, he is drawing on that Web site's style for his own Internet site. The page features videos of a casual Edwards, kicking back and just talking to the camera. 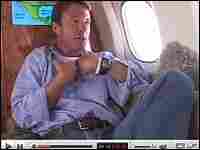 From NPR News, it's DAY TO DAY.

DAY TO DAY TV critic Andrew Wallenstein wanders into politics now, which is only fair considering how politicians get into TV. Over Christmas week, for instance, Democrat John Edwards used a video on his Web site to announce his bid for the presidency. And now, he updates his campaign with a series of short Webisodes on Web TV.

So here with a review, Andrew Wallenstein.

ANDREW WALLENSTEIN: Forget the John Edwards you think you know. Now, he wants you to get acquainted with the real John Edwards. It's the very first thing he tells you in a handful of behind-the-scenes shorts floating around the Internet. Just listen.

Mr. JOHN EDWARDS (Democratic Candidate for President): I actually walk the country to see who I am - who I really am. But I don't know what the results of that will be. But for me personally, I'd rather be successful or unsuccessful based on who I really am, not based on some plastic Ken doll that you put out in front of audiences.

WALLENSTEIN: The real John Edwards doesn't just sound different than the usual stump speech. He looks different. You almost never see him in a suit and tie in these Webisodes. Instead, Edwards' opening remarks are delivered in jeans and a button-down Oxford, rumpled just so as he kicks back inside the cabin of his campaign airplane. In theory, it's a savvy play to young voters who hangout a lot on the Internet. And I get it. Slip the bitter pill of politics into the bottomless Slurpee that is viral video.

But in practice, the real Edwards comes off a lot like the unreal one. The air of casualness these videos try to peddle is just too carefully cultivated. These shorts are a world away from the traditional 30-second political spot. Shot with a shaky Handycam and ambient noise licking all over the audio, each episode is about five minutes of not so verite. We're supposed to see what Edwards is like away from the podium, just hanging out with young campaign staffers. In another clip, he's visiting a refugee camp in Uganda.

Mr. EDWARDS: Do you have any medicine for the HIV/AIDS?

Mr. EDWARDS: It's not enough.

WALLENSTEIN: This video campaign wants to be exactly what you don't expect in a political message - no glad-handing candidates who come off too refined for the shambling masses on the Internet. The effect is not unlike the rough edge-style filmmaker Alexandra Pelosi brought to her documentary about the 2000 campaign trail, “Journeys with George.” And Edwards may need this kind of image underhaul more than anyone. He's too polished, and comes off a bit like a Ken doll instead of an actual human being.

These videos try to capture a more off-the-cuff Edwards, but they've got a ways to go. Even when he isn't on the stump, Edwards has a certain stiffness reminiscent of Al Gore, as you can hear in this scene when he tries to joke with one of the filmmakers about making a speech.

Mr. EDWARDS: I wrote my speech after lunch.

Mr. EDWARDS: It's a great speech.

Unidentified Woman #2: Can you read it?

Unidentified Woman #2: You can?

Mr. EDWARDS: Yes. It says, intro - I don't know what that's going to be. I'll think it up when I get there.

WALLENSTEIN: What Edwards campaign wants is for the candidate to come across like your buddy over on the next bar stool. Instead, Edwards is as hopeless as your father trying to act hip in front of your friends. It's not too compelling to reveal the man behind the mask when the man looks an awful lot like the mask itself.