Accessibility links
Abuse Scandal Still Echoes Through Catholic Church Five years ago, The Boston Globe exposed widespread allegations of sex abuse by clergy in Boston and efforts by the Catholic Church to cover it up. The 2002 scandal marked a culmination of events in the works for decades. 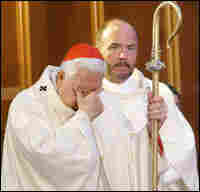 Cardinal Bernard Law (left) rubs his eyes during Mass in April 2002, as the clergy sex-abuse scandal in the Boston church continued to unfold. Law stepped down amid calls for his resignation in 2002.

In 2004, Pope John Paul II appointed Law to a ceremonial position overseeing one of the basilicas in Rome, where he still lives today.

Where Are They Now? Find out about other key personalities in the Boston church scandal and where they are today. 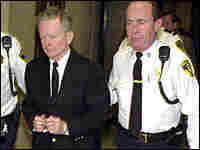 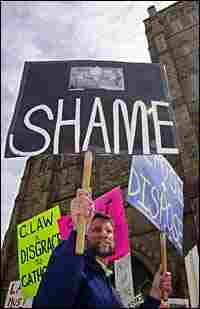 Protesters gather outside the Cathedral of the Holy Cross in Boston in April 2002, demanding the resignation of Cardinal Bernard Law. Court documents obtained by The Boston Globe revealed that Law and other church leaders covered up allegations of sex abuse by clergy. William B. Plowman/Getty Images hide caption 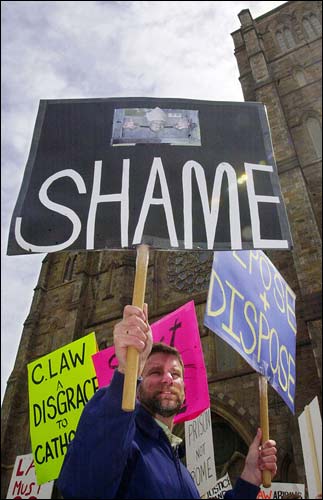 Protesters gather outside the Cathedral of the Holy Cross in Boston in April 2002, demanding the resignation of Cardinal Bernard Law. Court documents obtained by The Boston Globe revealed that Law and other church leaders covered up allegations of sex abuse by clergy. 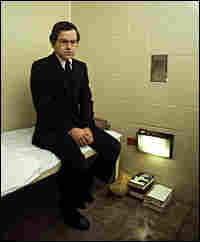 Former priest Gilbert Gauthe sits in a holding cell in Lafayette Parish, La., in a 1985 file photo. Arrested in 1983, Gauthe was convicted of sexually abusing dozens of altar boys. His was the first case of a pedophile priest to gain national attention. Gauthe was released from prison in 2002. Philip Gould/Corbis hide caption

Five years ago this month, The Boston Globe published a series of reports exposing widespread allegations of sex abuse by clergy in Boston and efforts by the Catholic Church hierarchy to cover it up.

According to the Globe, 130 people claimed to have been sexually abused by Father John Geoghan, and church officials had known about the abuse and covered it up. The scandal triggered a chain reaction. Thousands of victims of clergy sex abuse around the country went public and filed suit, creating a scandal that rocked American Catholicism and has cost the Catholic Church more than $1 billion.

Clergy sexual abuse was a story that had been around for a long time, but had never caught fire. So why did things happen so differently in 2002?

A small wooden cross still hangs above the kitchen door in Maryetta Dussourd's home in the Boston suburb of Jamaica Plain; it's the only visible remnant of her Catholic faith. Three of her sons and four of her nephews were molested by Father John Geoghan in the 1970s. Family is everything to her, and back then, so was the Catholic Church.

"I had a priest coming into my home," Dussourd recalls of Geoghan's visits. "I was so blessed, my children were so lucky. My kids had Father John Geoghan."

Geoghan came over almost every night and helped put the children to bed. That's when he would whisper prayers in their ears and fondle them. It went on for two years. Dussourd credits The Boston Globe with shining a light on the dark secret that destroyed her family. But ultimately, she says, it was God's will to expose and expel the predators in 2002.

"Why did everything come to a boiling point?" Dussourd says. "For my kind of mentality, it's only because God is spitting them out. Thousands of his children have been physically, criminally molested, raped."

There may have been an element of divine intervention, but what made 2002 different than other sex-abuse scandals were documents — thousands of them — proving a massive cover-up. In August 2001, The Boston Globe asked the Massachusetts Superior Court to release secret church documents about what church leaders knew and when they knew it. The judge ruled in favor of Globe, releasing a paper trail of responsibility that led all the way to Cardinal Bernard Law.

Evidence of a Cover-Up

Father Tom Doyle, a former Vatican canon lawyer, left his work with the church to work with victims of clergy abuse. He says people were outraged when they saw the evidence of a church cover-up in the newspaper.

Perhaps no one saw the furor more clearly than Michael Paulson, religion correspondent for the Globe and part of the investigative team that won a Pulitzer Prize for the sex-abuse stories. He says the Globe was prepared for a flood of criticism from the Catholic faithful.

"In fact, there was this tidal wave of reaction directed not at the Globe but at the church," Paulson says.

As anger mounted, Paulson and his colleagues quickly realized that the scandal was much bigger than Boston.

Going Up Against the Church

While the sex-abuse story went national, the Globe pressed on, exposing abuse by dozens of other priests in Massachusetts, and the actions of the bishops who moved them around. Other papers picked up the trail: the Dallas Morning News, the Cleveland Plain Dealer, The New York Times and The Washington Post.

The public pressure became too much for the Vatican to ignore, and in April 2002, Pope John Paul II called all the American cardinals to Rome to discuss the crisis. Ultimately, Boston's Cardinal Bernard Law was forced to step down.

For a long time, Paulson says, the church had been considered off-limits to scrutiny from the press. Not anymore.

"People have become more willing to question and challenge major institutions in our society, and that goes for journalists, as well," he says. "And it became possible, for those reasons, for a major newspaper to ask tough questions about a major religious institution."

A Scandal Years in the Making

But other people and cultural forces helped set the stage long before. In 1988, the king of daytime talk, Phil Donahue, devoted an entire segment of his show to cases of clergy sexual abuse across the country. One of them was the case of Gilbert Gauthe, a priest in Louisiana with a long history of molesting children.

Phil Saviano is the founder of the New England chapter of the Survivors Network of Those Abused by Priests (SNAP). He spent most of the 1990s talking publicly about his abuse and trying to get the media to care. Saviano says the Donahue show was a rare moment of vindication for him and other victims.

"I was so excited when I read about that story in TV Guide that I set my VCR, my Betamax, to record it, as I was going off to work that day," Saviano says. "Because suddenly, that was the first instance that I knew that what happened to me — being molested when I was a kid — was perhaps something that also happened to other kids, by other priests, in other parts of the country."

Setbacks in Reporting on Alleged Abuse

But this new openness didn't come without risks and setbacks. In 1993, high-profile allegations made against Chicago's Cardinal Joseph Bernadine proved false. In the aftermath, virtually all victims' claims were called into question.

"In a sense, the fiasco surrounding the Bernardine case gave newsrooms a rationalization to retreat from this kind of coverage," says freelance journalist Jason Berry.

In the mid-1980s, Berry uncovered evidence of widespread clergy sexual abuse in Louisiana. For a long time, he says, few wanted to talk about priests raping children, let alone investigate it. As soon as one victim's allegations didn't pan out, Berry says, the media backed off.

"You know, I started to question myself and started thinking, 'Well, you know, maybe it is time to just move on and let this stuff go," Saviano says. "And then I'd get another call the next day, from another victim in another state, crying, and that would keep me going."

The Laity Finds Its Voice

But in 2002, it wasn't just victims who were speaking out. Catholics around the country left the pews and took to the streets, demanding answers and apologies. And that, says former Vatican canon lawyer Father Tom Doyle, was something the U.S. Catholic Church had never seen before.

"Catholic laypeople generally had been treated like children when you get involved in the church," Doyle says. "You know, 'Don't question the bishop, he knows best. The priest knows best.' Well, there were a number of people who weren't buying that anymore, especially when it came to their kids."

Doyle says that this new, emboldened spirit has kept the momentum going as more and more victims come forward even today. The scandal of 2002 marked a culmination of events and forces: the revelations of secret documents; the power of the Internet to connect victims; a heightened cultural consciousness about sex abuse; a new determination from reporters to tell the story.

And perhaps in 2002, America was just more willing to listen.