Accessibility links
Pelosi: Bush's Iraq Policy a 'Desperate Cause' The new Speaker of the House Nancy Pelosi of California discusses the Democrats' agenda in the first 100 hours and beyond; and how Democrats will move forward with their opposition to President Bush's expected plan to raise troop levels in Iraq. 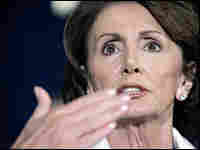 Nancy Pelosi, who is the first woman to be elected speaker of the House, says the war in Iraq is the "biggest ethical challenge facing America." Brendan Smialowski/AFP/Getty Images hide caption

Becoming the First Woman Elected Speaker of the House

The War in Iraq

A Democratic Proposal for Iraq

The First 100 Hours of the New Congress 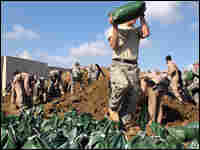 Ahead of a much-anticipated speech by President Bush on Iraq, newly elected House Speaker Nancy Pelosi has described the president's Iraq war strategy as a "desperate cause."

"The president's policy in Iraq is a failure," says the Democrat from California. "We're asking the president for a plan to change course, to take us in a new direction."

"We want to make the American people safer, the region more stable, and our military [stronger]. Right now, what the president is doing is not doing that. In fact, what he is doing is a threat to our military readiness."

She says that although Democrats oppose escalation of the war in Iraq, they will listen to the president's arguments for a troop increase. But, she says, the president must be prepared to justify his plan.

"This will be new to the president," Pelosi says, "because the Republicans never asked any questions before, they just gave him a blank check."

Referring to the recent elections that put Democrats in control of Congress, Pelosi says that voters want a change in strategy. "They do not want a war without end," the speaker says, "and that is what the president is proposing."

Together with Senate Majority Leader Harry Reid, Pelosi has proposed a change in mission from combat to training in Iraq, which would include political and diplomatic initiatives in addition to military operations.

"The administration doesn't seem to understand that, but you cannot send the military in ... without other initiatives."

That's the view of Democrats in Congress, Pelosi says.

"We would hope that in [President Bush's] consultation with those who are advising him, that he would take into consideration those terms," Pelosi says.

Pelosi has set an ambitious agenda for the first 100 hours of the new Congress. Over the next two weeks, the House of Representatives will debate and vote on six items at the core of the Democrats' agenda. Among them are repealing subsidies for big oil companies and using the money to fund research into alternative energy sources, giving government the power to negotiate drug prices for Medicare, and reducing interest rates for student loans.