Accessibility links
Snowmobiles Likely to Keep Access to Yellowstone Critics of allowing snowmobiles in Yellowstone National Park say they're noisy, polluting and stressful to animals. Advocates say the vehicles are getting quieter all the time. The National Park Service is likely to make permanent rules that grant snowmobilers limited access to the park in winter. 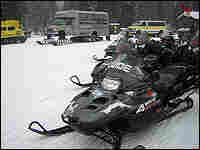 This snowmobile belongs to a guide. Current rules require all snowmobilers in the park to be escorted by a trained guide, who ensures that no one goes off the roads or bothers the elk and bison. Jeff Brady, NPR hide caption

The Debate At a Glance

- Snowmobiles are loud and pollute. While cleaner and quieter than they were just a few years ago, the vehicles are still neither clean nor quiet.

- The Park Service's own research shows snow coaches are better for the environment.

- The Park Service is not required to accommodate all transportation choices, just provide access to the park.

- The priority is maintaining the pristine qualities of the park for future generations.

- Snowmobiling has been allowed in the park for four decades.

Currently, the Park Service is leaning toward allowing 720 snowmobiles per day. They must have the best available technology to reduce pollution and sound. There must be a commercial guide to ensure snowmobile users follow the rules. 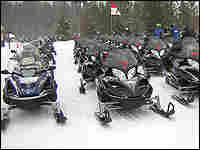 Current rules allow 720 snowmobiles a day in Yellowstone National Park each day, starting on December 20th. But in recent years the numbers have been well below that. The snowmobile rental companies blame confusion over whether snowmobiling is allowed in the park. Critics of snowmobiles credit the increasing popularity of snow coaches. Jeff Brady, NPR hide caption

Yellowstone National Park in winter is an awe-inspiring landscape for people like Michael Scott. He heads the Greater Yellowstone Coalition and says most people recognize the park is a special place.

"[They] talk almost in a whisper, and go very gently and very respectfully into the park in winter," Scott says.

Those who ride snowmobiles are the exception. Every winter day, the whine of hundreds of snowmobiles can be heard. The loud engines interrupt the serenity that Scott and others value. And, he says, they put stress on animals, such as elk and bison, that already have a difficult time making it through winter.

In recent years, the Park Service has gone back and forth in deciding whether to ban snowmobiles. Scott contends that snow coaches are the best way to balance access to the park in winter with environmental protection. The newer coaches look like vans, with the tires removed and rubber tracks on the back to power through snow. In place of the front wheels are skis to steer the coach. Per passenger, the coaches emit less pollution than snowmobiles.

Snowmobile manufacturers counter that their machines are getting cleaner and quieter all the time.

After a decade of studies and court cases, the Park Service is leaning toward adopting temporary rules that have been in place since 2004. They allow 720 snowmobiles into the park per day. Groups of about 10 must have a guide, who is trained to keep snowmobilers away from animals and on the roads. The rules also require rental companies to use the best available technology in their machines to reduce noise and emissions.

David McCrary owns Two Top Snowmobile Rental in West Yellowstone, Mont. He says confusion over the rules has hurt his business in recent years. Still, he says he'd rather have "half a sandwich than no sandwich at all." So he generally supports the Park Service's proposed rules.

Snowmobiles were first allowed into the park in the 1960s.

"To eliminate snowmobiles in Yellowstone at this juncture is absolutely... it's just downright mean-spirited," says McCrary. "Because you're going to disenfranchise a lot of people that come back, year after year, with their families — and now their grandchildren. Just generations of people have done this at this point."

Environmental groups point out that there are thousands of acres of national forest land surrounding Yellowstone where snowmobilers can ride. McCrary says people come from all over the country to use those lands. But, he says, most also want to spend a day in the park.

"Without Yellowstone," says McCrary, "we're just another place with snow and good trails. And there're a lot of [other] places where these folks can go."

Michael Scott of the Greater Yellowstone Coalition won't say whether his group will take the Park Service to court if it fails to ban snowmobiles. The Service will accept public comments on the issue starting in February or March. It hopes to adopt a final rule before the next snowmobile season starts in December.

1973: All of the park's interior roads are designated for snowmobile use during the winter.

1993: Winter visitation exceeds 143,000 — a number that wasn't projected to happen until 2000. That prompts the park to develop a new winter-use plan.

1997: Fearing the animals would spread disease to domestic cattle, the state of Wyoming slaughters more than 1,000 bison that left Yellowstone Park in the wake of near-record snowfalls. The Fund for Animals sues, claiming the park hadn't considered the effect of winter recreation on endangered animals. The Park Service, under the Clinton administration, settles and agrees to re-examine winter-recreation rules.

2000: At the end of the Clinton administration, the National Park Service decides to ban all snowmobiles from the park within three years. Snowmobile manufacturers challenge the decision in court.

2001: The Park Service, under the Bush administration, settles with the manufacturers and agrees to re-examine the Clinton-era rules.

2003: The Park Service decides to allow 950 snowmobiles a day into the park, but the machines must employ the latest technology to reduce pollution and sound, and all visitors must enter the park with a commercial guide. The Fund for Animals challenges the decision in court, and a judge reinstates the Clinton-era ban.

2004: Responding to a state of Wyoming challenge to the ban, a judge orders the Park Service to lift the ban and develop new rules for winter recreation. The Park Service puts temporary rules in place that allow 720 snowmobiles per day, using the latest technology and commercial guides.

2006: The Park Service examines a range of options and says it's moving toward adopting the temporary plan as the permanent one, with minor changes. The agency hopes to adopt the final rules in mid-2007.