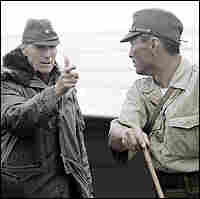 Clint Eastwood has examined the Battle of Iwo Jima from two sides this year. His acclaimed film Flags of Our Fathers followed the stories of the American soldiers who raised the flag in one of World War II's most enduring images. His new movie, Letters from Iwo Jima, explores the perspective of the Japanese soldiers who fought it. The actor once best-known as a western and action star has directed a number of great films, including Unforgiven, Mystic River, and Million Dollar Baby.

'Letters from Iwo Jima'
'Flags of Our Fathers'