Accessibility links
Q & A: President Bush's Plan to Boost Troops in Iraq President Bush's much-anticipated speech on Iraq, in which he announced a plan to increase the number of U.S. troops on the ground in Iraq, is already attracting skeptics on Capitol Hill and elsewhere.

Responses to the President's Plan 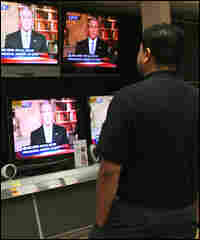 A man watches President Bush's address on his plan for the war in Iraq at a Maryland electronics store. Nicholas Kamm/AFP/Getty Images hide caption

Read the Speech in Full

President Bush's much-anticipated speech on Iraq, in which he announced a plan to increase the number of U.S. troops on the ground in Iraq, is already attracting skeptics on Capitol Hill and elsewhere. The immediate impact of the plan may be muted, because the increase in troops will be accomplished by extending tours of duty, and redeploying units that have already served in Iraq.

In his speech, the president also acknowledged the failings of his strategy for U.S. forces in Iraq. "Where mistakes have been made, the responsibility rests with me," Mr. Bush said.

A guide to elements of the plan:

What exactly did President Bush propose?

President Bush outlined a plan that includes adding at least five brigades — or from 20,000 to 22,000 people — to the current U.S. troop level in Iraq. But the speech was also a chance for the president to acknowledge mistakes — and to say that more American troops should have been fighting the war in the first place. The White House has rejected that view in the past.

In addition, the president proposed an aid package for Iraq, and suggested ways to expand employment options for Iraqi citizens. The president's primetime address from the White House library lasted a little less than half an hour.

In his speech, the president sought to make several points: that the new proposal is actually an Iraqi plan; that Iraqis will take the lead, with the United States providing support; and that the problems inside Iraq are ultimately for the Iraqis to solve.

Simply put, "It's time for the Iraqis to step up," is how a senior administration official, speaking on background, put it.

Why is the president asking for an increase in troops now?

The White House says it will give the Iraqis "breathing room" by helping the Maliki government as it establishes more civil institutions. The White House also insists that it has gotten a real commitment from Maliki that the Iraqis are prepared to take the necessary steps to take over security across the country (Iraqis promise to do that by November of 2007, according to a senior White House official).

But President Bush has also admitted that mistakes have been made, that there were not enough troops to hold violent areas once insurgents were driven out. He also said that there were too many restrictions on what U.S. forces could do. Political considerations within Iraq too often protected what a White House official describes as "bad actors" in Iraq.

Mr. Bush now insists that U.S. military commanders believe that the new strategy addresses both of those problems.

Some of the president's advisers have concluded that the young Iraqi government won't be able to maintain order in the country until sectarian violence calms down. Some critics of the handling of the war have said there should have been a much larger force in the initial stages of the postwar period, after the overthrow of Saddam Hussein in April 2003.

But there have also been sharp disagreements about whether the United States should concentrate on training and building up Iraqi security forces and police, or whether the focus should be on directly providing security for the Iraqi population. Mr. Bush has said in recent weeks that he would only add American troops if the mission is specific and can really be accomplished.

Where will the troops come from?

The talk about "adding" U.S. troops can be misleading. Much of the expanded U.S. presence would come from extending current deployments, or sending American troops back to Iraq for another tour earlier than scheduled. In the short run, the first troops added to the mix may well come from forward bases in Kuwait and elsewhere outside the United States. In the longer run, reservists are expected to carry much of the burden, as they have in the past.

What does the White House say about the likely impact of this increase?

With the expanded manpower, U.S. forces are expected to reinforce their current concentration on the capital, Baghdad. The goal would be to reduce violence there in a relatively brief period of time, in order to show results. American troops would directly intervene by going into sectarian neighborhoods — both Shiite and Sunni — to confront militia units and gangs that have largely been able to operate at will.

What do critics have to say?

Some critics suggest the Army and Marine Corps cannot provide the troops needed without straining their resources, especially given the number of tours already served by the combat units involved.

Others doubt the wisdom of adding more troops, saying that the problem in Iraq is not troop strength. They note that previous buildups and efforts to concentrate on Baghdad have not improved the situation to date — and that these efforts have not lowered, but in fact raised, the level of violence.

There are also those who say U.S. forces are not properly equipped, and that they could never have the flexibility to engage, fight and defeat a shadowy enemy that includes local insurgents, as well as foreign fighters.

Another line of criticism holds that the war has become a primarily sectarian struggle, and that the United States has no business being in the middle of a civil war. Democrats say American voters made clear in November that they want the United States to begin leaving Iraq soon, and that public opinion polls have since confirmed and even strengthened this sentiment.

How long is this troop increase expected to last?

The White House won't say. All the president says it that he has made it clear to Prime Minister Maliki that it's not "open-ended." Mr. Bush said Wednesday night that if Iraq does not keep its promises, it will lose the support of both the American public and the Iraqi people. (Though the latest polls would indicate the Mr. Bush has already lost the support of the American public on the war.)

Such language from the president is a big shift from past White House rhetoric that "the U.S. will stand down when the Iraqis stand up." Still, President Bush and his aides do not say what the consequences will be if Iraq does not "step up" and follow through on new promises. Administration officials say that they still feel there is a chance for success. So they decline to discuss the "what-ifs" of possible failure.

Why are some people reluctant to refer to this as a "surge" in troop strength?

The term "surge" was chosen within the White House to suggest a strong but temporary offensive. Other terms that have been applied to the troop increase include "escalation," a term used during the buildup in Vietnam in the mid-1960s. At the time, many regarded the word escalation as something of a technical euphemism for sending more troops.

Telling Americans that this will be a "surge" of U.S. forces suggests it will achieve a specific goal or create conditions, after which the president may be able to begin reducing the U.S. troop commitment. But the president has resisted any time frames that could be called timetables for withdrawal.

There have been complaints about the term "surge" because it implies added forces arriving from outside the country; in fact, many of those involved in raising the troop level are already serving in Iraq and being required to stay.

Gen. George Casey, who was the top U.S. ground commander in Iraq, has been replaced. Casey was scheduled to leave his command in Iraq, but there has also been speculation that President Bush removed Casey because he disagrees with Mr. Bush and believes an increase in U.S. forces may be ineffective. Many military experts say an increased U.S. presence could actually be counterproductive if it stirs up more anti-American anger in Iraq.

What about public opinion?

A new USA Today/Gallup poll shows 72 percent of Americans disapprove of President Bush's handling of the war in Iraq — by far the highest level of opposition to the president's war policy since the invasion of Iraq in 2003. (The previous high was last fall, when 67 percent said they disapproved of the president's management of the war).

The White House has largely brushed aside poll numbers throughout the war, but lately the administration has started to change its message. Spokesman Tony Snow said Mr. Bush understands "that it's important to bring the public back to this war and restore public confidence and support for the mission." Snow acknowledged that opinions are likely to change only "on the basis of results."

What about the recommendations from the Iraq Study Group?

The president said he and his advisers "benefited from the thoughtful recommendations of the Iraq Study Group." And Mr. Bush laid out some proposals which echoed the Study Group's thinking. He said he wants to increase the embedding of American advisers in Iraqi Army Units, and wants an American or coalition brigade to partner with every Iraqi Army Division.

But the speech was far from an embrace of the ISG's comprehensive prescription for Iraq. Rather, the president's call for added U.S. forces is in line with the thinking of Republican Senators John McCain of Arizona and Lindsey Graham of South Carolina.

And it seems based on the theory of Frederick Kagan, a military scholar at the conservative American Enterprise Institute who has long called for a sizable "surge" in American forces as the only way to contain the chaos in Baghdad.