Accessibility links
How 'American Idol' Uses (and Abuses) Melisma Melisma is the musical art of stretching a syllable over a run of notes. But American Idol contestants (and pop singers) sometimes abuse and overuse the technique.

Where You'll Hear It: When American Idol returns to the air on Tuesday

Who's a master and who's a misuser? You be the judge.

Marion Williams' "The Day Is Past And Gone"

Whitney Houston's "I Will Always Love You"

Jennifer Hudson's "And I Am Telling You" 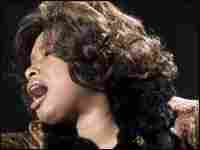 Jennifer Hudson's Golden Globe-winning turn in Dreamgirls has critics raving about her stunning vocals. But fans of the singer have known about her talent since her humble beginnings on American Idol. And even if you're not one of the 30 million addicted viewers of the Fox TV show, you've probably heard one of Hudson's musical tricks: melisma.

Melisma is the musical art of creating a run of many notes from one syllable. In the United States, singers in the African-American church popularized the vocal practice, which dates to Gregorian chants and Indian ragas. When Sam Cooke, Ray Charles and Aretha Franklin began singing popular music, they brought melisma to more mainstream audiences. Whether you love it or hate it, Whitney Houston's hit "I Will Always Love You," with its elongated "iiieeee-eyes" and "ooooeeeooos," is a prime example.

American Idol contestants (and pop singers) sometimes abuse and overuse the technique in songs. At worst, they can fracture a word into a soulless slur of syllables that feels both alienating and groan-inducing. Plus you have no idea what word they're singing.

To get ready for the new AI season, spend a few minutes this weekend with our guide to melisma, courtesy of Anthony Heilbut, music producer and author of The Gospel Sound: Good News and Bad Times.

How was melisma used in the early days of the African-American church?

Usually one person would recite a lyric or line of a song. Then congregants would repeat the line with their own variations. The ultimate choral effect was immense.

Can you describe that sort of melisma?

The melisma of a traditional gospel singer is rooted in folkloric moans and blue tonality. The most transcendent moments occur when a melismatic line is saturated with blue notes.

What can melisma accomplish in a song?

As some crucial moment in the lyric, the singer will worry a word to the point of abstraction. Ideally, the vocal distortions, the intricate and convoluted division of one syllable into as many as breath will allow, convey an eruption of feeling. But melisma can become so predictable that the singer's passion can be questioned, even though the singer is usually making "ugly faces" to convey the soul's torments.

How has melisma changed over the years?

As gospel singers became more professional, they would try to outdo [each other], much like a jazz musician in a cutting contest. The fancier the runs, the more amused or delighted the audience might be.

About 20 years ago, I dubbed these elaborations the "Gospel Gargle" and the "Detroit Disease."

Some of [melisma's] earliest and most audacious practitioners hailed from the Motor City. [Their variations] are much more self-conscious. In more recent years, soul singers, and ultimately pop singers, adopted these very busy and self-advertising forms of phrasing.

So while a great gospel singer such as Aretha Franklin can employ melisma for dramatic purposes in a manner that seems true to the song's message, singers today seem to indulge themselves in a manner that is both virtuosic and anonymous. And the more it is done, the worse it is done. Something that might have seemed fresh and charming in the beginning began to seem self-indulgent and, to many of us, exhibitionist.

What are they doing wrong?

Often, there isn't any musical justification of what they are doing. [Their runs] interfere with the flow of the melody, of the lyric, of the harmonies, sometimes of the rhythm itself. It's frequently a very vulgar and ugly display. [That's] the style of American Idol singers, most of whom are amateurs. [They] are simply mimicking the devices of the style's most famous practitioners — singers like Mariah Carey, who indulge in runs.

How can melisma serve singer and song?

It can carry both the singer and the congregation to a higher sense of the song's meaning; until it really becomes really a form of musical catharsis.

When [the late gospel singer] Marion Williams sings "The Day Is Past and Gone," her subtle use of melisma helps turn a lullaby into a cosmic blues. The note-bending begins with the third word, "is," which is echoed in the next measure by a moaned hum, which is also melismatic. The listener understands at once that she is singing about something deadly serious. By the time she has reached the penultimate line of the second verse, "but death may soon disrobe us," each melismatic turn has led us to the song's crux.

With all the attention and backlash this style receives, how subjective is any of this?

In and of itself, melisma can be a great thing, it's just been terribly abused by some untalented and insensitive singers. But I think the practitioners like to think that this is a sign of their engagement in the song.

The irony is that melisma is one of the glories of gospel music; I feel a real loyalty to it. I don't think you can get very much better than gospel singers at their best.