Accessibility links
Low-Stress Life May Be Best Way to Prevent Colds Some people swear by a jolt of wheat grass or mega-doses of vitamin C or zinc to ward off a cold. But researchers say those dietary supplements, while popular, are unproven. The best preventative medicine so far seems to be a low-stress lifestyle.

Listen
Low-Stress Life May Be Best Way to Prevent Colds 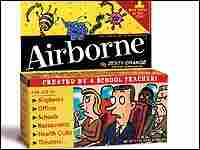 Sales of Airborne, marketed as an immune-system booster, have jumped from $2 million to more than $100 million in the last four years. Airborne hide caption

For every parent who has warned that going out in chilly weather without a coat will make you sick, there's a kid who refuses to bundle up. But should parents worry that their coatless children are inviting in disease?

Colds are caused by viruses, but when a nasty one spreads around the office or through the family, why do some people get sick and others don't?

Some add a jolt of wheat grass or green tea to their smoothies. Others choose megadoses of vitamin C.

Many people swear by Airborne, a top-seller in drugstores that's marketed as the "original immune-boosting tablet" and "created by a school teacher!"

"My fiance takes it all the time," says Washington, D.C., resident Nuri Nusrat. "He says it works to prevent him from getting sick."

Sales of Airborne have jumped from $2 million to more than $100 million in the last four years. But researchers say there isn't any evidence to show that the tablets can actually prevent people from catching a cold.

"They're unproven," says Dr. Ronald Turner, who leads clinical research at the University of Virginia School of Medicine. He's not just skeptical of Airborne, but of all supplements that claim to boost the immune system.

"There's never been anything that's been definitely shown to either prevent or treat common-cold illnesses," Turner says.

The makers of Airborne have conducted only one small research study. They found that four out of five people who took Airborne either recovered completely or improved somewhat within five days.

The results may sound promising, but people who do absolutely nothing to treat their colds also get better just as quickly, according to Turner.

The marketers of Airborne say they'd like to do more research. But for now, scientists say the only way to evaluate the product at all is to look at its main ingredients.

Airborne contains herbs such as Echinacea, which, although very popular, has been shown by the best scientific studies not to work.

It also contains megadoses of vitamin C. Most people get plenty of that in their diet. Airborne also contains zinc, which has been studied repeatedly, but with results all over the map.

The best evidence suggests there is no magic elixir that will keep you from getting a cold. So, is there anything — besides washing your hands frequently — that you can do to protect yourself?

Researcher Sheldon Cohen at Carnegie-Mellon University is focusing on the role of stress.

"We know quite a bit about stress and infection," says Cohen. "We've been doing research in that area for 25 years."

In one study, Cohen and his collaborators interviewed 400 healthy adults about how stressed out they are. They asked questions such as:

-- Do the demands you face exceed your ability to cope?

-- How anxious, angry, or depressed have you felt over the last week?

"After we administered the questionnaires," says Cohen, "we exposed the people in the study to one of five viruses that cause the common cold."

Cohen's team then tracked the volunteers for six days and found that those who had reported higher levels of stress were twice as likely to catch a cold as those who were less stressed out.

This correlation has held up in two follow-up studies. Cohen has also evaluated long-term stressors such as marriage problems or the loss of a job.

"So the longer the stress lasted," says Cohen, "the greater the probability that the participants exposed to the virus would actually catch a cold."

Taking stress out of their lives is not something most people can do on demand; unresolved disputes don't disappear at will.

So maybe it's no surprise that consumers are willing to buy into the possibility that items such as Airborne, zinc tablets or Echinacea can protect them.

Mark Irlandez, who stopped in to buy a smoothie at a Dr. Robeks store in Washington, D.C., says he doesn't really believe any of the dietary supplements really work. But when he's coming down with a cold, he sometimes reaches for it.

"Maybe it's mental," says Irlandez. "When you're taking something, maybe you feel your immune system should be stronger and maybe you get over stuff faster."