Accessibility links
Smart Elevators: A Faster Way Up and Down Smart elevators are designed to transform the simple act of traveling between floors in a building. With fewer stops, passengers arrive at their destinations more quickly. But they can also take a little getting used to.

Listen
Smart Elevators: A Faster Way Up and Down 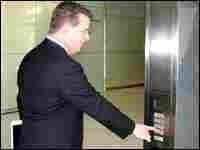 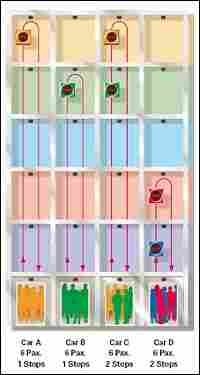 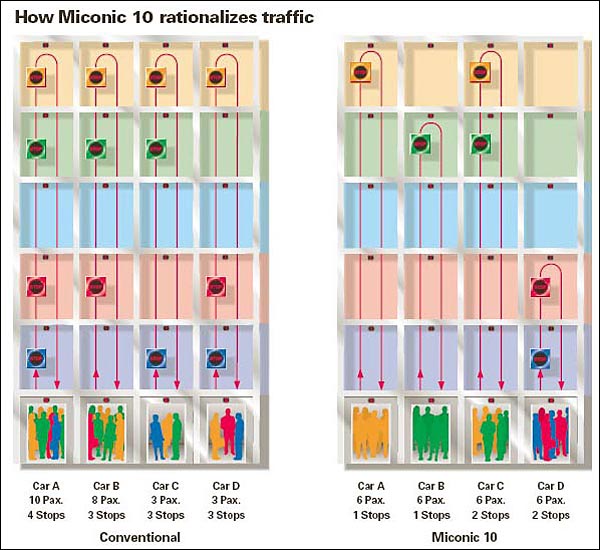 In this simplified example of a classic up-peak situation, 24 people call elevators over a period of a few seconds to travel from the lobby to a variety of floors.

With the conventional control, the first 10 arrivals cram themselves into the first available car. The next eight fill up the second car, and the few remaining occupy the other cars. This random behavior by passengers means that every car has multiple destination stops, so journey times for each car are slowed, and the majority of passengers suffer overcrowding.

Miconic 10 works to keep each car load at about six occupants. It knows that floors 4 and 5 have the highest call density in up-peak traffic, so it directs the six passengers traveling to each of the two busy floors to individually assigned cars, and rationally distributes the remainder. The result: a quicker, less-crowded ride.

Smart elevators are designed to transform the simple act of traveling between floors. Instead of pushing a button to go up or down, passengers first select the floor they want. Then they are directed to the elevator that will take them to their destination with the fewest number of stops.

Manufacturers say smart elevators are faster, easier and even more energy efficient than older elevators. But they can also take a little getting used to.

If you live or work in a big city like New York, you end up taking a lot of elevators. At certain times of day, like lunchtime or 6 p.m., when everyone's coming and going at once, you can feel like you've spent half your life waiting for the floor number on that little digital screen to change.

So when the Hearst Corp. built its showcase 46-story tower on West 57th Street, it wanted elevators that would be easier to use. Today a new bank of eight elevators sits in the huge, sun-drenched lobby.

"People find these kind of ultrasleek, modern.," says Brian Schwagerl, Hearst's vice president of real estate. "The doors open, they go 'whoosh' and then the doors close and they go 'whoosh' and before you know it, you're transported to the 10th floor and you've hardly even felt the ride."

Hearst's elevator is called the Miconic 10. It's made by the Schindler Corp., though other manufacturers including Otis Elevator and ThyssenKrupp Elevator have similar models.

The first thing you notice about the Miconic 10 is that it has no up and down buttons. Instead, a single square column with a keypad stands in the middle of the lobby. Enter the floor number and the keypad directs you to a particular elevator.

The elevator closes almost noiselessly and speeds to its floor. The Miconic 10 is called a smart elevator for its ability to move people around more efficiently. By stopping at fewer floors, the elevator cars can return to pick up people more often.

And because smart elevators make fewer stops, they use less energy. Building owners like them because they mean fewer large crowds forming in lobbies waiting for the next car.

Smart elevators can also calculate the weight of their passengers to prevent too many people from getting on. It can also slow down if a disabled person is boarding.

Smart elevators can be tough for users to figure out. That can be confusing at a place like a hotel, where users are inexperienced. But Hearst's Brian Schwagerl says people quickly adjust.

Manufacturers concede that smart elevators aren't practical in buildings that are less than 10 stories. They're also more expensive. For those reasons, their use is spreading slowly. Schindler has installed about 600 of the systems in North America. But with more and more buildings looking for ways to move people around faster, the market for smart elevators is expected to grow.

The Schindler Micronic 10 Elevator System
About the Hearst Tower