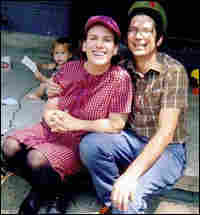 Filmmaker Helen Hill was murdered in New Orleans last week. Her death has undermined hope for the city's future. David Koen, a writer, attorney and her friend, attended her funeral Wednesday.

My dear friend Helen Hill has left the city she loved.

Last week, Helen was shot and killed by an intruder. Her husband Paul huddled over their young son, saving his life, while the gunman fired bullet after bullet into him.

Helen was emblematic of New Orleans — a radiant bundle of energy, creativity and good cheer.

She was an award-winning filmmaker. Paul joked that he was probably the only doctor ever supported by an artist spouse. Before Katrina, he ran the Little Doctor's Neighborhood Clinic in Treme, an old Creole neighborhood. He served anyone who walked in the door.

He and Helen made a genuine commitment to New Orleans and its people — to take care of the poor, to put a little sparkle in someone's day.

Their house took on four feet of water in Katrina. They spent a year in exile in South Carolina. Paul had had it with New Orleans, with the violence and the terrible neglect that drowned the city. But Helen needed New Orleans, and New Orleans needed her.

Last summer, Paul, Helen, and their son came back to town. Last week, I stood in front of their home, before the altar that has grown by the front steps. Dozens of candles, bouquets and handwritten notes lined the walk.

I can't tell you how guilty I feel. I had repeatedly told Paul the violence of New Orleans was nothing to be scared of. Now Helen is gone, and Paul probably is out of here for good.

I found an old e-mail from Helen, written a week after Hurricane Katrina: "There's no other place I can imagine being... but what will New Orleans be like now?"

Helen, I'll tell you what it's like. Our friends are cowering in their homes, and they're asking themselves these questions: Should I get a gun? Should I get a dog? Should I leave New Orleans?

Because I've got to tell you, Helen, your death feels like the final straw.

In the days after Hurricane Katrina, the federal government left us to die like dogs in front of the Superdome and the Convention Center. Hundreds of thousands of people are still not back in their homes, partly because the state hasn't given out all the grant money to rebuild. We still don't have Category 5 hurricane levee protection.

There are signs everywhere that used to state, "Thou Shalt Not Kill." Now they've been reduced to the shorthand, "Enough!" New Orleans is dying, ya'll. Helen, do you think anyone is listening?