Accessibility links
How iMet My Neighbor on iTunes When a folder called "Anna's Music" popped up on NPR reporter David Kestenbaum's computer — with music he absolutely loved — he followed a trail that led to an awkward encounter.

Listen
How iMet My Neighbor on iTunes

Odds are David Kestenbaum's playlist won't pop up on your PC. But if you're curious about the songs on his radio piece, here they are:

Song #4: My Doorbell from the White Stripes' Get Behind Me Satan.

Song #5: Let the Cool Goddess Rust Away by Clap Your Hands Say Yeah from their eponymous 2005 album.

Song #6: Mad World a cover of the Tears for Fears song by Gary Jules from Trading Snakeoil for Wolftickets.

Song #7: The Shining by Badly Drawn Boy from The Hour of Bewilderbeast. 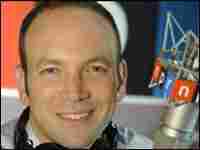 If David Kestenbaum rang your doorbell, would you let him in? Steve Barrett hide caption

One night, NPR reporter David Kestenbaum was listening to music on iTunes. And he was bored with his playlist. Then he noticed something strange — a mysterious folder called "Anna's Music" had popped up his screen. He'd never seen it before.

And the weird thing is, when he went to listen to the music, it was just like his. Everything he had, she had: Beck, the White Stripes, Beth Orton... It was as if he'd found his musical soulmate.

Who is Anna and how did her songs end up on Kestenbaum's computer?

When he clicked on one of the songs, her e-mail address appeared. He sent her a note (making sure to emphasize that he was not a stalker). He issued an invitation to dinner. He made sure to mention that he was married. And then, with the aid of his wife, he set out to find Anna.

There was an awkward encounter — and a lesson about how the Internet can bring us closer to strangers but can also keep us apart.