Accessibility links
Victims of Clergy Abuse Wrestle with Faith, Past The sex-abuse scandal that rocked the Catholic Church in 2002 first gained attention in Boston, but new victims have emerged around the country. Some seek solace through the courts; others, in mending broken ties to the church.

Listen
Victims of Clergy Abuse Wrestle with Faith, Past 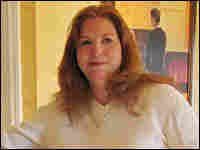 Christy Miller was abused by a priest when she was in high school in the 1980s. In 2003, she sued the archdiocese of Cincinnati and started a support group for victims of clergy sex abuse. The suit was dismissed because the statute of limitations had expired. Despite that, she says she's found strength in speaking out. Evie Stone, NPR hide caption

The sex-abuse scandal that rocked the Catholic Church in January 2002 first gained attention in Boston – a city that, for many, is the symbolic center of American Catholicism. But new victims soon emerged in other parts of the country. Now, five years later, many of these people are still speaking out.

"I battled the largest institution in the world," says Christy Miller, a fiery red-headed mother of two in Cincinnati, Ohio. "And I'm OK. I survived. I'm better and I'm stronger."

I sat down with Miller in the kitchen of her home in an upscale suburb of Cincinnati. She showed me handwritten letters from the priest who abused her when she was in high school in the 1980s. She taped the notes onto yellow poster board that she's used in press conferences and courtrooms. Some of the earlier letters are addressed to "Christy, Student," signed from "Father Tom, Teacher."

Later, as the abuse became physical, the language changed. Miller points out notes signed "Love, Father Tom," or just "Love, Tom." Miller didn't come to terms with her abuse until she was married with children. She didn't go public until she saw things unravel in Boston.

"At that point, I began to feel knowledge is power," she says. "When I first started dealing with this, I read everything I could get my hands on. Everything. I read every book, every news article; I would search the Web for hours and hours."

In 2003, she sued the archdiocese of Cincinnati and started a support group. Miller was part of a case that went all the way to the Ohio Supreme Court, but was dismissed because the statute of limitations had expired. Miller then led an effort to change the law and suspend the statute, but that failed, too.

The whole thing was tough on her family. Her daughters had to leave Catholic school because of pressure from other kids and their parents. Despite all this, Miller says she has never looked back. She is no longer a victim, but a survivor.

"I may not have won, but I was brave enough," she says. "I had the courage to say, 'What you're doing is wrong, and I'm not going to let you get away with it anymore.'"

Tethered to Memories of Abuse

Many of the victims I spoke with echo this same kind of defiance. But for others, the last five years have opened more wounds then they've healed.

Chris Luthy, 33, is a husband and a father, a recovering drug addict and a victim of clergy sexual abuse. Just a few months ago, he tried to kill himself.

"I think where I'm at right now is a very scary place," he says anxiously. "And it's not easy. Every day, that abuse just knocks on your door and says, 'How you doing now?' Because you're a really miserable person."

It's the middle of the day, and Luthy is at home in his sparsely furnished apartment just outside Cincinnati. He's in jeans and sneakers, his salt and pepper hair spiked up in a stylishly haphazard kind of way. Luthy picks up a picture of his son, Matthew, off a shelf.

"He's my most perfect thing I've ever done in my life," he says as he runs his finger over the frame.

And while his son helps him look to the future, Luthy remains tethered to memories of the abuse and his abuser.

"We'd sit down at the table to eat dinner for Thanksgiving, and under the table, he'd have his hands probing around your pants and trying to get into your pants," he recalls. "Till this day, I wonder if that's why I don't like holidays."

Luthy was part of the same lawsuit Christy Miller filed. But instead of being empowered, Luther ended up feeling victimized all over again. He has been in and out of therapy for alcohol and drug abuse for more than a decade. He has refused to go to group counseling for the sexual abuse. But on a recent night last month, he took a big step: He sat down with other victims for the first time, at a monthly support meeting for victims led by Christy Miller and Dan Frondorf.

Reaching Out to Fellow Victims

Green wall-to-wall carpet covers the floors, and artificial plants decorate the coffee table. Group members sit in a circle on floral patterned sofas and chairs. It feels like a stage set or the fake living room on a TV talk show, but the people sitting here and the stories they tell are very real. Miller welcomes the group. Frondorf asks everyone to introduce themselves.

There are about a dozen or so people present. While each one shares his or her story of how they were abused, the others listen intently, some with their eyes closed, some with their arms crossed. It's emotional, and sometimes group members have to leave the room to compose themselves.

It is clear from listening to their stories that to this day, they struggle with a lot of issues, including their relationship with the Catholic Church. Some still call themselves Catholic but won't set foot in a church.

"I hope that I can deal with it the way I need to, for my child's sake," he says. "My baby was just baptized into the Catholic Church. I wasn't there."

In this group, Michael Vanderburgh is the exception. He's actually found his faith in God and church reinvigorated. Dressed in a tie-dyed T-shirt, Vanderburgh leans forward in his chair when it's his turn to talk.

"The cycle of abuse is a terrible thing," he says. "You know, we're the privileged ones that can break that cycle. And I think there are certain responsibilities that go along with that, and we don't just walk away."

Vanderburgh sits on the lay committee on clergy abuse for the Archdiocese of Cincinnati, and he attends these meetings to try to build bridges between the church and survivors.

But his words are unsettling for many at the talk sessions.

Chris Ward is with a national group of Catholics called Voice of the Faithful. She tells Vanderburgh that changes approved by the U.S. Bishops in 2002 — such as stricter clergy background checks, a national audit system and a pledge for more transparency — are hollow promises.

"Five years into this, nothing has changed — except pieces of paper that don't mean anything," she says.

Vanderburgh expects to hear this kind of frustration. But he made a decision a few years ago: The priest who abused him may have taken his innocence, but he wouldn't take his faith.

"It comes back to this idea that this is our church, and it's our responsibility to yell and scream, and to do whatever we have to do, to protect ourselves and our families and our communities," he tells the group.

According to SNAP, the Survivors Network of those Abused by Priests, there are a couple thousand abuse lawsuits pending against the Catholic Church. Attorneys I spoke with who specialize in these cases say they get calls from new victims every week. Some seek solace through the courts; others, like Vanderburgh, find it in the church.

But no matter who the victim is, or how much they've healed in the past five years, they all say that there are days when it feels like one step forward, two steps back. People like Chris Luthy are just trying to keep moving.

"It's a roller coaster, and you can only handle 24 hours at a time," he says. "And then you have to hang up your coat and say, 'OK, I did my best today. Tomorrow is another day.' You shed your skin so you're new again. I think that's a baptism of sorts."

The road to that kind of rebirth is still a long one for Luthy and other victims. But he says at least now, he knows he's not alone.