Accessibility links
Saving Music One Video at a Time These days, music television plays more reality shows than music. So producer Nigel Godrich has created a new show called From the Basement. You'll find it only on the Web.

Listen
Saving Music One Video at a Time 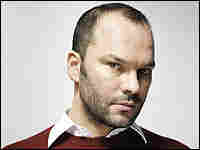 From Beck to Paul McCartney, Nigel Godrich has produced the music of some of the biggest names in the industry. And for his newest project, he's added a video camera to the mix. Courtesy of Nigel Godrich hide caption

Thom Yorke - Videotape and Down Is the New Up

The White Stripes - Blue Orchid / Party of Special Things To Do, Red Rain, and Ugly As I Seem 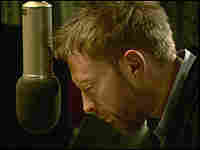 Radiohead's Thom Yorke performs a song called "Videotape" — which may or may not appear on the new Radiohead album. Courtesy of Nigel Godrich hide caption

These days, music television seems to play more so-called reality shows than it does music. And that bothers Nigel Godrich. He's the award-winning producer behind bands like Radiohead, Travis and Beck. And now he wants to save the music video from a commercial death. To do that, he's created a show called From the Basement. But you won't find it on television. This show's only available on the Web.

Godrich says rock videos haven't always been so bad. The Old Grey Whistle Test, a show that aired on the BBC in the 1970s, is one of his favorites. Despite their limited resources and a simple production quality, the show still serves today as an archive of bands from the period.

"That's the kind of thing I feel is missing from these days from the whole kind of boom of MTV and youth television that's spawned from it. It's no longer so much about music and performance. It's just more about jerking your audience into watching and occupying their brains with as much as possible that's not the actual music," says Godrich.

For the first episode, he called on The White Stripes and Radiohead's Thom Yorke.

"They get to play the songs they want to play," he says.

Jack White, for example, wanted to cover a Captain Beefheart song on the day he came into the studio. And so that's what The White Stripes recorded.

Godrich hopes that kind of creative freedom will continue to attract big-name bands, young and old. For now, he's reluctant to say exactly who will appear in future episodes. Beck and Jamie Lidell are scheduled for episode two, and Godrich says he'd love to have someone such as Paul McCartney or Bob Dylan.

"The basis of the show is, at a basic level, what you would want to see on TV," he says. "And I would like to see a good performance from Bob Dylan — well recorded and showing him come through."