Listen
The Man Behind the Moustache: Sacha Baron Cohen 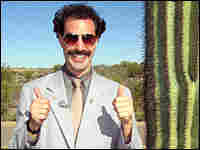 Cohen as Borat, a character that has earned the comedian both fans and detractors. 20th Century Fox hide caption

Mr. SACHA BARON COHEN (Actor): Should I be able to hear myself or not?

BURBANK: Now you can.

BURBANK: Here's a hint. He's nominated for two Golden Globes this year. His movie has grossed almost $250 million worldwide. He can't go anywhere without being mobbed. Still not sure? Okay, fine, we'll give it to you.

Mr. COHEN (As Borat): Jagshemash! My name a Borat! I journalist for Kazakhstan. My government send me to U-S and A...

BURBANK: Yes, it's Sacha Baron Cohen, the man behind the wildly popular movie "Borat". In the film, Cohen interviews unsuspecting people while playing the part of a lovable yet anti-Semitic, anti-woman, anti-hygiene, somehow anti-gypsy TV reporter from Kazakhstan. For a while, Cohen would only do public appearances in character. But that's changing, as I found out when I talked to him recently.

BURBANK: Yeah, which you look you could probably grow in a matter of hours.

Mr. COHEN: I know. I'm actually very (unintelligible). In fact, if I wasn't this hairy, I would have probably have been unemployed, because I don't really use fake mustaches. So the shooting schedule when we do "Da Ali G. Show" is always derived by my ability to, you know, grow a mustache in a couple of weeks.

BURBANK: So if you have to do Ali G. and then do Borat, you have to be able to grow a thunderous 'stache...

Mr. COHEN: Yeah. I have to get, yeah, a huge 'stache within, you know, within a couple of weeks.

Mr. COHEN: (As Borat) The Ministry of Information decide to make this film about America because we want to be like you. America have most beautiful womens in world. For example, Liza Minnelli and Elizabeth Taylor. I like!

BURBANK: Did you in any way expect that "Borat" would - I mean there are popular movies and then there are things that are like the cultural event of that year.

Mr. COHEN: Yeah. It is bizarre, because essentially, you know, when we were making the film, we thought it was at best going to be a cult film because it was so experimental. You know, essentially this was the first time that a movie had been made in a real situation so that there were real people who were pushing the plot forward. The amazing thing was it actually worked.

Unidentified Man: My name is Mike. I'm going to be your driving instructor. Welcome to our country. OK.

Mr. COHEN: And the bizarre thing is that people actually came to see it. And it was, you know, that first weekend when I found out that we were actually the most popular film in America that weekend, it was the most bizarre and overwhelming experience.

Mr. COHEN: (As Borat) Look there is a woman in the car. Can we follow her? And maybe make sexy time - I get her.

BURBANK: Is it going to be impossible for you to do another movie where you are in the character?

Mr. COHEN: I think it will be probably be impossible. There's a number of things that are in development and it will probably be a scripted comedy. So I think the days of me going undercover are probably over.

BURBANK: You're nominated for a Golden Globe for Best Comedy Motion Picture, and also Best Actor. I think some people are like, when they heard that the movie was nominated, they were surprised maybe in the acting category only because it was such a different movie than everyone has seen. But as you think about it, this is more acting than anyone has ever done in the history of a motion picture.

Mr. COHEN: Well, the thing is about the acting in this is that essentially there are a number of challenges. One is that I have to stay in character usually for about eight hours at a time. Because if somebody gets suspicious and goes wait a minute, he's standing there in the corner like a kind of guy from England, or he suddenly sounds like he's not really Kazakhi, then everything is over.

Mr. COHEN: (As Borat) Do you think a woman should be educate?

Mr. COHEN: (As Borat) But is it not a problem that a woman have a smaller brain than a man?

Unidentified Woman: That is wrong.

Mr. COHEN: (As Borat) But the government scientist, Doctor Yamakav(ph), prove it is size of squirrel.

Unidentified Woman: He is wrong.

Mr. COHEN: Everything has to be in character. You know, there's a lot of tension, you know, during the day as a result of that. You know, and there's a lot of physical preparation for that as well. So I never wash the suit. So when I come into the room, there's immediately this terrible smell. Borat doesn't wear deodorant. So there is this kind of dreadful...

Mr. COHEN: ...Soviet-bloc smell the moment I walk in. And obviously, you know, the cameras are only rolling for a certain amount of time. When you're off camera, you've also got to stay in character. You've got to talk about your kids, your family.

Mr. COHEN: (As Borat) Will you please teach me how to dine like gentleman?

Unidentified Woman #2: Of course, I'll be happy to.

BURBANK: In that dinner scene there's an amazing moment where you as Borat bring back - you're like - you went to the bathroom in a plastic bag or you scooped it out the toilet or something. You brought it back - is there - when you're in the bathroom and you know you're about to do this on some unsuspecting people, is there a part of you that almost can't go through with it? Like how do you psych yourself up to do that?

Mr. COHEN: There is that moment where you feel almost like a hitman where, you know, I knew as Borat I'm going to bring down something now to the dinner party that's going to change everything. And you know, there is that moment when you look in the mirror and it is as if you pulled the gun out and you're about to assassinate someone and you're doing a hit, where you know everything is about to change. And everyone is having a lovely time downstairs but I'm about to bring a bag of fresh feces to the table.

BURBANK: This has been a tremendous success by any measure, and people are even talking about this being nominated for an Oscar. Could your mind even process that if you ended up with an Academy Award for "Borat"?

BURBANK: Well, Sacha Baron Cohen, thanks for being on DAY TO DAY.

Mr. COHEN: Thank you very much.

Mr. COHEN: Lovely to be here.

Mr. COHEN: (As Borat) But then it look like I'm holding a gypsy while he eats my (unintelligible)

Unidentified Man: I don't care what it looks like. You use two hands when you drive. Okay?