Accessibility links
A New Addition to Martin Luther King's Legacy The Temple Israel in Hollywood recently revealed a 1965 recording of a sermon delivered by the Rev. Martin Luther King Jr. at the behest of Rabbi Max Nussbaum. The rabbi himself used the pulpit to rail against injustices in Nazi Germany. Nussbaum's widow, Ruth, tells the story. 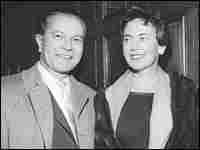 Rabbi Max Nussbaum and his wife, Ruth. The rabbi was active in the civil rights movement and also railed against the injustices of Nazi Germany. Jewish Journal hide caption 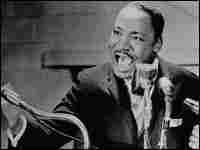 King's sermon at Temple Israel was recorded onto an old-fashioned, reel-to-reel audiotape. The Temple recently made it available to the public for the first time since 1965. © Bettmann/CORBIS hide caption

In 1965, a Rabbi named Max Nussbaum asked Martin Luther King Jr. to address his congregation at the Temple Israel in Hollywood.

Nussbaum was not only active in the civil rights movement, but he also made his name as a rabbi in Berlin by using the pulpit to rail against the injustices of Nazi Germany.

King accepted Nussbaum's invitation, and his sermon was recorded onto an old-fashioned, reel-to-reel audiotape. The tape was then forgotten, lost in a pile of the rabbi's other audiotapes and papers.

The rabbi died, and his widow Ruth came upon the reel while sorting through his stuff more than a decade ago. She submitted it to the Temple library, where it sat again.

The Temple has just made the tape of the speech available to the public for the first time since 1965. Ruth Nussbaum, 95, tells the story of the speech.

This story was produced by Queena Kim of HearingVoices.com.