Accessibility links
Hitler Comedy No Laughing Matter for Germans A new German movie — Mein Fuhrer: The Truly Truest Truth About Adolf Hitler — depicts the dictator as a clown. But the project tests both German and Jewish sensitivities. 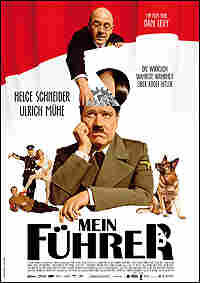 Helge Schneider plays Adolf Hitler and Ulrich Muhe stars as his Jewish acting coach in a comedy that doesn't have critics laughing.

A new German movie about Adolf Hitler opened this week. It's the first mainstream German film to make fun of the Nazi leader. And while laughing at Hitler has been a successful form of comedy in the U.S. and Britain, it's been unusual — if not taboo — in Germany.

As Mein Fuhrer, the Truly Truest Truth about Adolf Hitler begins, it's December, 1944. Germany has all but lost World War II. Hitler is depressed and unable to do anything. His propaganda minister organizes a major New Year's Day speech for the Fuehrer to rally the nation, and pulls a Jewish actor out of a concentration camp to coach Hitler back to his former glory. Hitler is played by a beloved German comedian, and his Jewish coach by a well-respected actor.

On opening night, at least one audience in Berlin chuckled when the acting coach — also named Adolf, last name Gruenbaum, middle name Israel — dressed Hitler in a track suit and made him do deep breathing exercises, and later, when Gruenbaum punches Hitler and knocks him out.

The film portrays Hitler as an impotent man who plays with battleships in the bathtub and wets his bed. Most critics have not been amused.

"It was not funny at all," said Claudios Seidel, who writes for the Sunday Frankfurter Allgemeine Zeitung newspaper.

He has two main problems with the movie. One, it makes Hitler seem harmless. And two, as a comedy, it does not go far enough.

The film suggests Hitler became a brutal dictator because he was mistreated as a child. One Jewish community leader here says Hitler does not deserve any mitigating circumstances or pity. But director and screenplay author Dani Levy says he was tired of documentaries that insist on demonizing Nazi leaders without asking how they came to power. Levy is Jewish and was born in Switzerland, where his mother lived after fleeing Hitler's Third Reich.

"For me as a Jewish person who lives here in Berlin I needed a new approach," Levy says. "And I felt this need of creating a comedy and deconstruct, destruct the nazi figures to have a better understanding what made the German people follow Adolf Hitler."

Critics say the movie has an oddly split personality — slapstick, plus wrenching back story. The wife and four children of Adolf Grunbaum, the Jewish character, are also allowed out of concentration camps while Grunbaum is working with Hitler.

Grunbaum's eldest son and wife want Grunbaum to kill Hitler, which he tries but cannot bring himself to do. This is an important storyline, says Moritz Reininghaus, editor of a Jewish paper here, Juedische Zeitung.

"That's maybe one of the aspects of the film that actually works, I think," Reininghaus says. "This is an actual discourse, an inner Jewish discourse about how the people should have reacted to Hitler in the regime. Could they have done something different?"

This cumulates in a scene when Hitler climbs in bed with Grunbaum and his wife, and she really tries to smother the German leader. Reininghaus says here, the film goes awry.

"Grunbaum himself says to his wife when she wants to kill Hitler: 'Now you are just like him, you would kill a defenseless person.' At first this is seems OK, because both Hitler and his victims were human. But how to handle this is a very delicate question."

In the run-up to the opening of Mein Fuhrer, the German media was consumed with the question of whether it's OK to laugh at Hitler. At this point in history, many Germans say yes.

But the film also makes jokes about the Holocaust too, which some critics say is a completely different matter.

As the end credits roll, the film shows a series of what appear to be interviews with ordinary people, young and old, who say they don't really know much about Hitler. This bothered 20-year-old Jan Schulmer.

"I thought the film had a funny approach," Schulmer said. "But overall, I wasn't totally satisfied with it. Because I think you need to be careful how you present Hitler."

Some people don't know much about Hitler and the Holocaust, he says, and worries they could think "Yeah, Hitler, his father was mean, and maybe it wasn't all so horrible... "