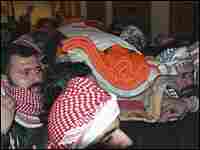 Coffins containing the bodies of Barzan al Tikriti and Awad al Bandar, aides of Saddam Hussein who were hanged, are carried out for burial, Jan. 15, 2007, in the Sunni Arab town of Awja, Iraq. Getty Images hide caption 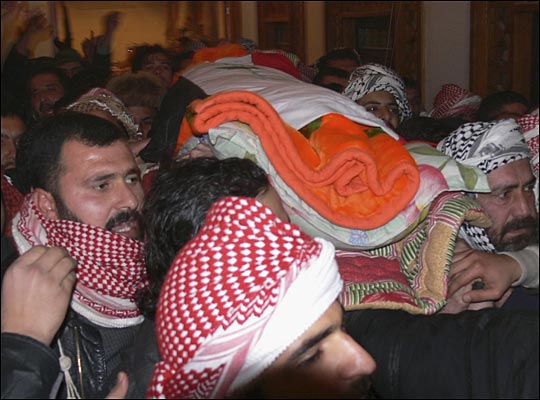 Coffins containing the bodies of Barzan al Tikriti and Awad al Bandar, aides of Saddam Hussein who were hanged, are carried out for burial, Jan. 15, 2007, in the Sunni Arab town of Awja, Iraq.

Iraqis began the day hearing unconfirmed reports that Awad al Bandar and Barzan al Tikriti, the two men scheduled to die with Saddam Hussein for crimes against humanity, had been executed.

Ali Dabbagh, the government spokesman, said that the sentence had been carried out according to the law with a limited number of people watching, including a prosecutor and a doctor.

Dabbagh said that everyone in the execution chamber was searched to ensure they weren't carrying cameras, and they all signed an agreement not to chant slogans or behave inappropriately. Dabbagh said there were no violations but then added one detail.

"In a rare incident," Dabbagh said, "the head of the convict Barzan was separated from his body during the execution."

Dabbagh called it an act of God. But many Sunnis didn't see it that way.

Arab and Iraqi TV stations flooded their broadcasts with the news. Sunni leaders interviewed on air accused the government of violating the law. They claimed that Barzan's body was mutilated, and demanded to see a video of the recording.

Amid the uproar Dabbagh hastily called a second news conference to show reporters a video of the execution. Bandar and Barzan were in orange jumpsuits, standing side by side. Bandar recited Muslim prayers as executioners placed black hoods over both their heads and looped thick ropes around their necks. Then the trap door opened and the two men fell simultaneously.

But while Bandar's body remained suspended in the air, the rope bearing Barzan snapped back up. His headless corpse dropped to the floor, and the severed head landed several feet away. Dabbagh said he didn't want to show the video, but said he had to because of the outcry over the decapitation.

Barzan and Bandar were among the most reviled figures of Saddam's regime. They were tried along with Saddam and four others for the deaths of 148 Shiites after a failed assassination attempt against Saddam in 1982. Barzan, Saddam's half brother, led the intelligence effort to find the would-be assassins. He oversaw interrogation and torture of the suspects. Some of the men and boys arrested died under torture before making it to court.