Accessibility links
Jury Selection to Begin in Libby Trial The only prosecution associated with the leak of Valerie Plame's status as an undercover CIA agent moves forward. Lawyers will begin questioning potential jury members for the trial of I. Lewis "Scooter" Libby, former aide to Vice President Cheney. 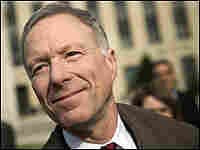 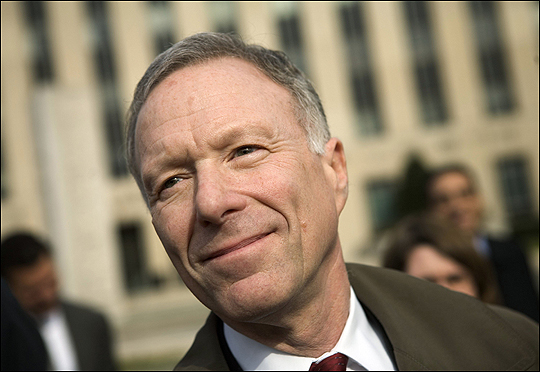 Jury selection begins Tuesday in the trial of Vice President Cheney's former aide, Lewis "Scooter" Libby. Libby is charged with five counts of perjury and obstruction of justice — the only prosecution to result from the celebrated Valerie Plame leak investigation, but he is not charged with leaking. He's charged with lying to investigators about his conversations with reporters regarding Plame.

As is so often the case in major investigations, this case recalls the old maxim, it's the cover-up, not the crime.

In July 2003, columnist Robert Novak revealed that Plame was an undercover CIA operative. Plame is the wife of former ambassador Joseph Wilson, who in 2002 was sent to Niger on behalf of the CIA to determine if Iraq was seeking to illegally buy uranium to use in nuclear weapons.

Wilson determined that Iraq had not been doing that, and when President Bush alleged the opposite in his speech justifying the invasion of Iraq, Wilson went public. A week later, his wife's CIA identity was revealed in Novak's column.

After a complaint from the CIA, the Justice Department named veteran prosecutor Patrick Fitzgerald to conduct an independent inquiry. Two years later, Fitzgerald announced a five count indictment against Libby, then Cheney's chief of staff, for allegedly lying to the grand jury and the FBI, and obstructing justice.

The indictment charges that Libby had been peddling information about Wilson's wife, not to Novak, but to other reporters, three weeks before the Novak column appeared. The indictment charges that Libby repeatedly lied when he told the grand jury and the FBI that the reporters had told him the sensitive information about Plame.

As for apparent lies, Libby maintains that he misremembered certain facts because he was preoccupied with other aspects of his job, such as terrorist threats, and emerging nuclear programs in Iran, Pakistan, and North Korea.

The defense will have to overcome a jury's natural inclination to think that an appearance before a grand jury, indeed more than one appearance, would focus the mind.

A problem for the prosecutor is that Libby was not the source of the Novak story. The primary source was State Department official Richard Armitage, who readily admitted to Fitzgerald that he had blabbed Plame's name in what he thought was a casual exchange of gossip with Novak. The second source was top White House aide Karl Rove, who initially denied it, and then recanted that denial to the grand jury.

Fitzgerald will likely tell the jury that the Novak leak is irrelevant.

On the plus side for the prosecution: an array of witnesses who will support Fitzgerald's contention that Libby was spreading Plame's story around. Among those witnesses are some journalistic stars, including NBC's Tim Russert, Judith Miller — the former New York Times reporter who went to jail for two and a half months rather than disclose what Libby had told her — Matt Cooper of Time magazine, and possibly star Washington Post investigative reporter Bob Woodward. These are all people who may be recognizable to the jury, and are people most lawyers think would come across well to a jury.

For the defense, the key witnesses will be the defendant himself, and, it is expected, his one-time boss, Vice President Cheney. It is still unknown whether Cheney will testify in person or whether his testimony will be videotaped and shown to the jury. But people on both sides of the case say it would help Libby more to have Cheney there in person, looking the jury in the eye.

The courtroom players for this trial are all stars themselves. Prosecutor Fitzgerald has convicted a long list of top government officials during his 19-year tenure in the Justice Department, most recently, winning a conviction of the former governor of Illinois. Defense lawyer Ted Wells was named the lawyer of the year by The National Law Journal. And the judge, Reggie Walton, is a Bush appointee, experienced and respected for his no-nonsense approach to trying cases.