Accessibility links
James Booker: Making the Insipid Sublime The eyepatch-wearing pianist was among the most erratic characters in the Crescent City, and as a result, his discography includes few solid studio sides. Booker was prone to effusive showboating, but on this 1977 live recording, he sounds engaged playing songs that were staples of his live show. 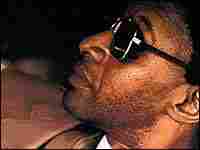 Of all the great New Orleans pianists, James Booker was the most technically agile. hide caption 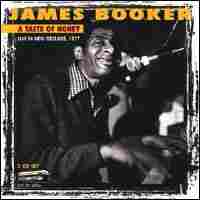 What are other examples of musicians "rescuing" a song considered trite?

On the Sunny Side of the Street

As he begins "A Taste of Honey" (audio) on what wasn't exactly an ordinary 1977 night in New Orleans, James Booker knows that sooner or later he'll find his way to the familiar melody. He's not, however, in any hurry. First, he plays crashing chords that reveal the limitations of what sounds like a well-punished piano. Then he makes the chords stormier, driving them into an atonal snowdrift. After a few minutes, he seems to realize this, and begins the super-sweet melody almost sheepishly, as if he's apologizing for getting so carried away.

Booker (1939-1983) studied classical music as a boy, and of all the great New Orleans pianists — including the better-known Professor Longhair — he was the most technically agile. A demonic showman, he could morph the most inane tune into shocking music in a manner of minutes. This "A Taste of Honey" shows that skill in action: Playing with great whimsical spirit, Booker methodically takes apart the theme until he reaches the top two octaves of the piano, at which point he slips and slides through a barrelhouse fantasia on the theme.

The eyepatch-wearing pianist was among the most erratic characters in the Crescent City, and as a result, his discography includes few solid studio sides. Even the many live records, including this two-disc set, are only intermittently great: Booker was prone to effusive showboating, and because he could dazzle on autopilot, that's often how he rolled when performing. Here, he sounds engaged playing songs that were staples of his live show: His "On the Sunny Side of the Street" (audio) is an impossibly buoyant stride-piano explosion, while his "Besame Mucho" functions as a condensed, Bookerized version of the history of New Orleans piano, touching on the Latin tinge of Jelly Roll Morton, the agile boogie of Professor Longhair and the florid embellishments of the great (and similarly under-loved) Eddie Bo. It comes out not as a history lesson but a pure spirit stream, the work of a rash genius who lived to show his listeners the beauty hiding inside even the most insipid and overplayed tunes.