Accessibility links
Band Tries to Make It Big Without Going Broke The Boston-based Dresden Dolls are on the verge of making it. They have a record label deal, draw ever-larger crowds and open for big-name bands. Still, just making enough money to survive remains a struggle.

Listen
Band Tries to Make It Big Without Going Broke 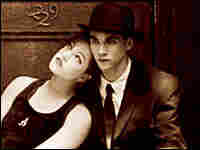 Music from the Dresden Dolls 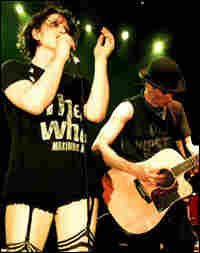 Palmer and Viglione perform in London in May. Even though they've signed with a pretty good-sized record label, the band mates still make most of their income on ticket and merchandise sales while on tour. Regis Hertrich hide caption

The Dresden Dolls in Studio

The Dresden Dolls joined David Dye of WXPN's 'World Café' in the studio last summer for a talk and jam session. Listen in:

Amanda Palmer is a full-time musician. She doesn't wait tables or work a day job. She's the lead singer for the Dresden Dolls. It's a band out of Boston that definitely has a signature sound.

Palmer plays keyboards. Brian Viglione, her partner, plays guitar and drums. And that's it. Many of the songs just have piano and drums, which might not sound like enough instruments, but it actually works for a range of songs – from quiet melodic to harder-edged indie rock to some more cabaret, theatrical-style tunes.

Viglione first heard Palmer playing piano at a party. He was a frustrated drummer playing bass in somebody else's band. Palmer remembers that he came up and said he'd like to play with her sometime.

"A few days later, we jammed together in a practice space and we just knew," Palmer says. "I have had few moments in my life that were as clear as that moment when we first played together, and we looked at each other, and we said, 'This is it. We're going to start a band and take over the world.'"

Close, But No Big Paycheck

The Dresden Dolls are a band on the verge of making it. Unless, of course, they don't. They've been touring almost full time for years, playing to ever-larger crowds and opening for some big-name bands. They've toured with Nine Inch Nails. But even at that level, it's very tough for a band to make enough money to survive. Just renting a tour bus costs $1,000 a day, including the cost of gas and a driver.

So like many other musicians, Palmer has been finding out that before you can take over the world, you have to learn how to survive. You can't play for beer money. Bands have to scramble, be entrepreneurial and make money in some unexpected ways. And you need to draw large crowds to buy tickets to your shows.

Palmer says that outside of some short reviews, the band hasn't received much coverage in music magazines to help them attract crowds. But she says despite that, "a band like us can play to 2,000 people in Boston, New York, Sydney, London and Berlin."

One thing in the band's favor is that Palmer's voice clearly falls into the gifted category --whether she's being quiet and melodic or nearly screaming. Viglione is a talented drummer, who makes you wish more bands still did drum solos.

Early on, the band mates started wearing burlesque-style costumes and white face paint, and they invited artists to hang work on the walls at their shows. That created some buzz.

Palmer and Viglione reached out to anybody they knew, of any age or walk of life, to come hear them play. And as the crowds grew, they managed to get signed a good-sized record label — which sounds good, but Palmer says it doesn't pay much.

"We make almost no money off our recordings themselves," she says.

Like many bands, the Dresden Dolls get a royalty that works out to about $1 per CD. But before a band gets to see any of that, it has to sell enough CDs to cover all of the label's production expenses, which can amount to hundreds of thousands of dollars. Most bands never sell enough CDs to dig out of that hole. So even as bands get bigger, they have to tour constantly to earn all they can from ticket sales.

Sitting at his drum set before a show, Viglione says that last year, the band went on tour in February and didn't get back until November.

"I couldn't even tell you how many cities we did," he says. "We went to Europe three or four times, hit Japan, Australia, New Zealand twice."

Palmer and Viglione might be budding rock stars, but they're still pretty broke. They have to pay their road crew three to four times what they pay themselves — which is a modest $1,500 a month. Remember, this a band that has toured with Nine Inch Nails.

"In order to go on that tour, we had to lose money," Palmer says. "Just because we're up on a giant stage, playing in front of 5,000 people, doesn't mean any money in our pocket."

That's because the headliner band takes about half of the gross ticket sales at a big, sold-out show. The venue and the promoter take almost all the rest. Deals vary greatly, but an opening band that wants the exposure might be paid a few hundred dollars to $1,000 a night. The Dresden Dolls' expenses are twice that: They have to pay their sound techs, manager and other support crew, and rent the bus.

Relying on Side Shows and Merchandising

To beef up their earnings, when they're on tour as an opening band, the Dresden Dolls play extra shows on off nights.

Recently, the band has been holding a series of shows at the American Repertory Theater in Cambridge, Mass. It's a sort of hybrid rock concert, with stage actors performing monologues and scenes between songs. After each show, Palmer heads to the "merch table" in the lobby to sell T-shirts, posters, CDs and — for $10 — black Dresden Dolls underwear.

At bigger shows, the Dresden Dolls can take in more than $1,000 a night selling merchandise, which makes the "merch table" a major source of income whey they're on the road. Of course, venues try to take as big a cut of that as they can. Palmer says that leads to regular screaming matches between bands and venue managers.

"The reason the shirts are sold for $25 and $35 is that the venue takes a giant, whopping percentage," she says. "Sometimes, they'll try to take a larger percentage than what's in the contract, and you have to whip out the contract and get into these arguments."

But every once in a while, easy money can come in out of nowhere.

Somehow, a jam and jelly company in Austria recently decided it wanted to use the song "Coin-Operated Boy" for a TV ad. The song has nothing to do with spreadable fruit. But the band has earned about $40,000 over two years for licensing the song — a windfall Brian Viglione says was fantastic.

He describes the commercial: "It showed this woman kind of bounding about through her house, and experimenting with different ways of using this spread and playing, along to the 'Coin-Operated Boy' song. And both of us thought it was hilarious and harmless."

But the band has turned down other licensing offers – such as one for a horror-film soundtrack.

Right now, the Dresden Dolls are taking a short break from touring. Palmer says she's just been on the road so much in recent years that she hasn't had any time to do what she set out to do: write songs.

"I haven't been writing. I've been promoting and e-mailing and phone calling," she says. "I haven't felt like an artist; I've felt like a businessman. I made that deliberate choice — looking at my computer and looking at the piano and saying, 'I'm going to e-mail.' Whereas the piano just looks like this amorphous, terrifying blob after a while, where you don't know what's going to happen when you sit down at it."

Palmer should get at least a few months to reconnect with her piano and her songwriting. When she landed her record deal, she bought a nice Yamaha piano and managed to crane it into her Boston apartment. So fans might look forward to some new songs soon. But come summer, she and Viglione will be back on the road.