Accessibility links
'Violin Dreams': Chasing Bach's Elusive Chaconne Arnold Steinhardt is the author of Violin Dreams, a memoir about his ultimate challenge: playing Bach's Chaconne, a 15-minute-long piece for solo violin. Steinhardt has been chasing the Chaconne for more than 50 years. 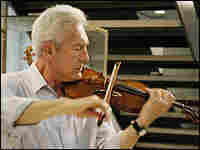 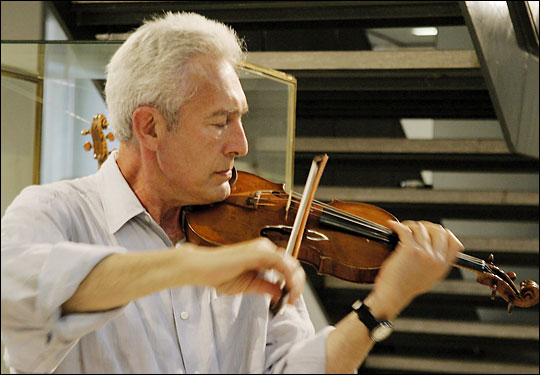 Arnold Steinhardt is first violinist with the Guarneri String Quartet and author of Violin Dreams, a memoir. 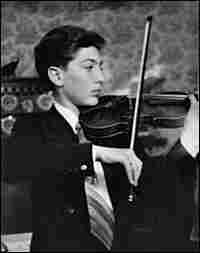 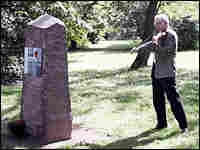 In 2004, Arnold Steinhardt played at the grave of Johann Sebastian Bach's first wife, Maria Barbara, in a park on the outskirts of the old city of Cothen, Germany. Dorothea von Haeften hide caption 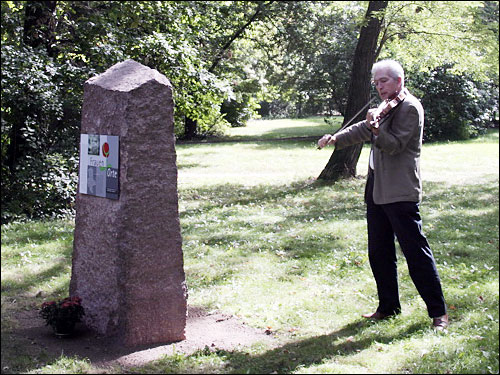 In 2004, Arnold Steinhardt played at the grave of Johann Sebastian Bach's first wife, Maria Barbara, in a park on the outskirts of the old city of Cothen, Germany.

Steinhardt on Why He Played at Maria Barbara Bach's Grave

Violinist Arnold Steinhardt has been playing Johann Sebastian Bach's Chaconne for more than half a century.

"It's quite a beginning," Steinhardt says of the piece's dramatic opening. "You have a sense that this is going to be saga, not just a small journey when you listen to those chords."

The Bach Chaconne has been a lifelong journey for Steinhardt. He calls the demanding, 15-minute-long work the definition of a masterpiece: You think you're approaching it, and then it elusively moves away from you.

Written in the early 1700s, the Chaconne is the fifth and final movement of Bach's Partita No. in D Minor. Each section is based on a dance: the Allemande, Courante, Sarabande, Gigue and then the Chaconne, which is longer than all four movements that precede it, combined.

As the story goes, Bach wrote it in memory of his first wife, after he returned from a trip to discover that she had died.

Steinhardt recorded a new version of the Chaconne last year. It is included with Violin Dreams, his new book about performing — solo, and with his longtime group, the Guarneri String Quartet — and in particular, about his relationship with the Bach Chaconne.

Steinhardt first heard the Chaconne performed when he was an 11-year-old violinist. His parents took him to a concert by Mischa Elman, then one of the reigning violinists of the early 20th century.

"That really changed the course of my life, although I didn't realize it at the time." 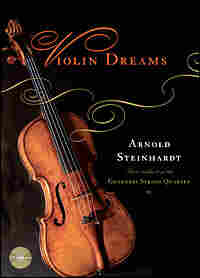 I decided to read through the first four movements of the D Minor Partita — the Allemanda, the Corrente, the Sarabanda, and the Giga — in order to get my bearings before tackling the fifth and final movement, the Ciaconna. (Bach employed Italian for the entire manuscript.) The work could easily have ended with the brilliant and upbeat Gigue. The first four movements were a more or less standard format for Bach's dance-based suites. Why then did he add another movement, which is easily as long as all the others combined? I shuttled back and forth between the various movements to see if I could find any common elements. Sure enough, each movement began with a bass line resembling that of the Chaconne's initial four-bar phrase. This in no way explained the need for the towering Chaconne on the heels of these four beautiful if modest movements, but at least the connection between them gave me assurance that some kind of glue might be holding everything together.

I had stalled long enough. It was time to start work on the Chaconne itself. In my childhood I found Bach baffling; in my adolescence his work seemed turgid. Now, as an adult, the Chaconne's power and mystery presented me with an intriguing challenge. By definition, a chaconne generally consists of a repetitive chord progression as well as a basso ostinato, or repeating bass line. There were in fact sixty-four such phrases in Bach's version, each independently pleasing but deeply moving when linked together.

As far as I could see, my first task was to figure out how best to combine these ever-changing variations cohesively. I had not forgotten Isaac Stern's advice in violin camp years ago: think of the Chaconne's variations as occurring in groups, so that the evolution of thought and feeling unfolds convincingly. At the outset my course seemed relatively clear, since the early variations all came as matched pairs in which the second of each could be treated as a simple response to the first. But every now and again a lone variation would appear, begging me to direct it somewhere. These orphans vexed me. Did each belong with the next or the previous pair, or did they stand alone to freshen the palate between courses? The basso ostinato also perplexed me. This recurring bass line was supposed to do just that — to repeat endlessly without significant alteration and to serve as the work's distinctive theme. Yet Bach refused to stick consistently to the bass template he fashioned for the beginning and chose rather to draw from several quite distinctive and different ones.

Another characteristic trait of a chaconne is a regularly repeating harmonic structure. Here again I could easily recognize not one but three or four different patterns. It was as if Bach had begun a card game with hard-and-fast rules that he then changed at whim again and again during play. Even the most easily identifiable element of a chaconne, a dance-related emphasis on the second of the bar's three beats, appeared only sporadically. If I were to dance the Chaconne, where and how would I place my feet when the stress was not on the second beat?

In previous encounters with the Chaconne, I had mostly busied myself with the daunting task of mastering the many awkward hand positions and building enough endurance to play fifteen minutes of uninterrupted and difficult music. Those hurdles still remained, but analytical thinking was relatively new to me. Unhappily, it brought few answers, only more questions. Perhaps Toscha Seidel had had a point when he had admonished me in that very first lesson on the Chaconne, "Just play it from the heart."

I decided to put past considerations aside for the moment and try to look at the bigger picture. The Chaconne was divided into three large sections. The dark and brooding outer sections flanked a hymnlike inner one that evoked peace, gratitude, and optimism. Was it far-fetched to think that Bach, a devout Christian, might have offered the Chaconne as an expression of the Holy Trinity, its bedrock spiritual principle? The first section, in D minor, would represent the Father; the next, in D major, the Son; and the final section, in D minor, the Holy Spirit. This line of thought intrigued me, even though I was on shaky footing as a secular Jew with only the flimsiest knowledge of Christianity. The more I looked, however, the more "threes" I found. The Chaconne's basic building block was a three-beat bar, the initial theme appeared three times — at the beginning, the middle, and the end — and then there were those evocative three-note groups that appeared over and over again. Was the Chaconne some kind of message in a bottle destined for (dare I think it?) God?