Accessibility links
For Broadway, It Was a Very Good Year Christmas week broke attendance and box office records, bringing in close to $30 million. That figure is impressive, but it also reflects some big changes in how tickets are sold on the Great White Way.

Listen
For Broadway, It Was a Very Good Year 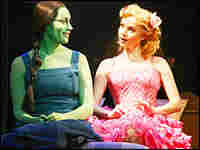 Wicked, which portrays the land of Oz B.D. (before Dorothy), had an average ticket price of $124.40 in the last week of 2006. It was also the year's top grosser, bringing in nearly $73 million, according to the League of American Theatres and Producers. Wicked hide caption

Based on 2006 attendance for shows that played all 52 weeks of the year. Source: The League of American Theatres and Producers.

Broadway's theaters got a great holiday gift at the end of 2006: Attendance and box office surpassed previous records, and revenues were close to $30 million during the week of Dec. 25.

But part of the smashing earnings can be attributed to a change in the way tickets are sold. The top-listed ticket price on Broadway is $115, but for quite a bit more, you can have the best seats in the house. Popular shows are now offering premium tickets.

The astronomical ticket prices have met with industry criticism. Gordon Cox, theater reporter for Variety, says, "There is still a perception from a lot of people, at least in the business, that these ticket prices are sort of price-gouging."

Scalpers and brokers have offered seats to hit shows at high mark-ups for years. Producer David Stone says that if there's extra money to be made, it should go to the shows.

"Why should brokers get money, instead of the people who created the show — the producers, the investors, the writers, the director?" Stone says.

Stone produces Wicked, which has sold out its performances since opening in 2003. Stone says the show takes about 5 percent of the available tickets and sells them for a premium rate of $300, though that percentage fluctuates, depending on the demand for seats.

This kind of flexible pricing is part of what made Christmas week such a record-breaking one, because more premium tickets were offered for all of Broadway's shows.

Musicals such as Wicked, Jersey Boys and Mary Poppins are enjoying the benefits of Broadway's boom, with tourists streaming in to fill more than 60 percent of the theater audience.

Producers point out that Broadway shows are a labor-intensive business, and those costs keep climbing along with box office grosses. Labor costs will come into play for all producers later this year, when Broadway's stagehands renegotiate their contract.

Even with all these smash hits, most Broadway shows do fail. Industry insiders are looking closely at how two offbeat musicals, Spring Awakening and Grey Gardens, will fare in this boom-or-bust industry. The challenge for now will be for these new musicals to hang on through January and February, when tourists are thinking about warmer places.