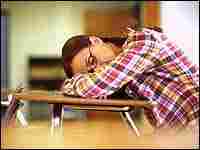 Your Questions on Sleep

Dr. Helene Emsellem, a nationally known sleep expert and author of the book, Snooze...or Lose!, answers your questions on how to get a better night's rest.

Books to Sleep On

Top sleep experts give their recommendations on books that explain why we need to take sleep seriously and how to make good sleep happen:

The Promise of Sleep: A Pioneer in Sleep Medicine Explores the Vital Connection Between Health, Happiness, and a Good Night's Sleep, by William C. Dement and Christopher Vaughn

Dr. William Dement is widely considered "The Father of Sleep" and his book is known as "The Sleep Bible." Now head of Stanford University's Sleep Disorders Clinic, Dement was one of the first to show the connection between poor sleep and poor health.

"What he gets right is how insomnia, sleep apnea, or problems with sleep deprivation affect mood and health," says Terry Young, a sleep epidemiologist and professor at the University of Wisconsin. "In our society now, we're really concerned about people not getting enough sleep; research more and more shows that inadequate sleep can cause serious health problems."

A Woman's Guide to Sleep: Guaranteed Solutions for a Good Night's Rest, by Joyce Walsleben and Rita Baron-Faust

Take Charge of Your Child's Sleep: The All-in-One Resource for Solving Sleep Problems in Kids and Teens, by Judith Owens and Jodi Mindell

"We teach kids in school about the food pyramid and wearing seat belts, but we teach them nothing about what they spend one-third of their lives doing," says Dr. Judith Owen, associate professor of pediatrics at Brown Medical School. Her book helps parents and kid establish healthy sleep patterns, in part by warning them about several major sleep enemies: TV, computers and caffeine.

Sleeping Through the Night: How Infants, Toddlers and Their Parents Can Get a Good Night's Sleep by Jodi Mindell

For parents of newborns and toddlers, Owens and the National Sleep Foundation both give Sleeping through the Night a thumbs up. "It's very practical advice and really takes parents step-by-step in terms of how to address bedtime struggles and night wakings," says Owens. Mindell is affiliated with the Sleep Disorders Center at Philadelphia's Children's Hospital.

Sari Meltzer of Rockville, Md., coaxes herself out of bed at 6:45 a.m. each school day.

"I'd rather turn over" and stay in bed, she says. The classic teenage struggle is mostly due to a shift in the sleep-wake schedule that turns many teens into night owls.

In the evenings, Sari is connected to many friends via the phone, e-mail, instant messaging and online networks.

"Last night, I e-mailed my camp friends, and I was talking online and going on Facebook.com," and with all of that going on, she says, it's easy to lose track of time.

Sari is much more mindful of sleep these days. Two years ago, when she began having trouble falling asleep before midnight or 1 a.m., her mother took her see to sleep physician Helene Emsellem.

"My practice taking care of teens increased mostly as my own children became teenagers and I became more enlightened about the problems," Emsellem says. "We've also learned a lot more about what regulates the sleep-wake schedule."

Genes, exposure to light and dark, personal behavior and the secretion of melatonin all play a role in regulating sleep.

Research studies have documented that two-thirds of teenagers experience a shifting of the internal clock toward much later sleep times. Emsellem says our society's 24/7 culture makes things worse.

"As we have more and more ways to stay connected at night, we've seen an exaggeration of the night-owlism in teenagers," Emsellem says.

To fight back, Emsellem urges parents to take televisions and computers out of teens' bedrooms — which is easier said than done. And she encourages a strict turn-off time, with the exception of music-playing devices.

"I encourage teens to listen to music at night, and make a playlist that's soothing," Emsellem says. When the volume is low, and the room is dark, the environment promotes sleep.

-- Remove clutter from your teens' bedrooms.

-- Have your teen shower at night and set clothes out in the evening, too, so he or she can get a few more minutes of sleep in the morning.

-- Encourage more exercise if your teen is not participating in a sport.

-- Help your teen set a regular sleep-wake routine that won't vary by more than two hours on the weekends.

Teens may only adopt these changes once they believe there is really something to be gained from sleeping more. To this end, Emsellem tells her patients that optimal amounts of sleep, which for teens is 9.25 hours, is almost a form of studying.

"After you've learned things during the day — without ever opening a book again — you'll score better on a test of new material than you did at the end of the lecture," she says.

This is because your brain replays the information and consolidates it into memories as you sleep.

"Exaggerating light in the morning in order to reinforce the circadian signal of light to the brain is a very powerful tool," Emsellem says.

Sari Melzter wears a visor with two bright lights built into the brim for about 20 minutes every morning as she's getting ready for school. The visor, made by Physician Engineered Products, is called a "Feel Bright Light."

"My mind feels more awake after it," Sari says.

Then, in order to power-down after the school day is over, Emsellem has advised Sari to take an over-the-counter melatonin pill.

Melatonin, which signals the brain to turn off alertness, can be helpful, Emsellem says. But clinical research trials have turned out mixed results about its efficacy. There is some evidence to suggest that melatonin is effective in treating delayed sleep-phase syndrome with short-term use. Emsellem recommends a small dose six hours before bed.

The Challenge of Weekends

Teens who adopt better sleep habits sometimes lapse during weekends when typical teen life involves staying up well past midnight. This puts the parents of teens in a bind.

"You really almost feel like a criminal if you wake them up before 11," says Emsellem. Parents know their teens are exhausted. But if teens don't stick to within two hours of their weekday wake schedule, they'll get so far out of sync that Monday mornings, says Emsellem, will be very tough.