Accessibility links
San Francisco Orders Paid Sick Leave for All San Francisco will become the first city in the United States to require that all employers provide paid sick leave. Labor groups hope the new law will serve as an example. Many small-business owners say they can't afford the mandate. 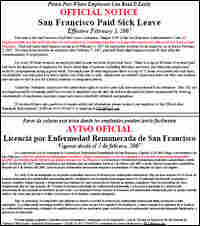 Starting next month, San Francisco will become the first city in the country requiring employers to give their workers paid sick leave. But some are questioning whether businesses there can afford the mandate, which comes on the heels of other new benefits in the workplace.

Jeanette Jweinat, who works at the New York Street Cafe in San Francisco's Mission District, is one of more than 100,000 workers in the city who are not currently paid for sick days. That will change Feb. 5, when all employees — full- and part-time, permanent and temporary — will be covered. And they can miss work even when they aren't sick, but have to stay home to help a domestic partner or a family member.

In Jweinat's case, that means caring for her 10-year-old son.

"You know, sometimes he's sick and I have to go pick him up from school or he's not feeling good and he needs the day off," Jweinat says. "I just had to leave work. I had to take that chance. That's more important, that's my priority right now. So you got to do what you got to do."

Employees will accrue one hour of paid sick leave for every 30 hours of work. There are caps depending on the size of the business.

But businessman Bill Stone forsees a whole new set of bookkeeping headaches and added expenses to cover his 21 employees. Stone runs the nearby Atlas Cafe.

"Basically, it's just going to make it more expensive to operate your business," Stone says. "Small business is going to have to pass that cost onto their customers. Which is fine if everyone wants these kinds of things."

Many details of the new law still mystify some employers, such as when and how an employee can use accrued sick leave, says attorney Nancy Berner.

"Part of what I'm hearing is simple confusion," she says. "They're calling and saying 'what do I have to do to comply?' And its not entirely clear. I try to give them the most conservative advice because I want them to comply and they want to comply. But it's come up so quickly. It was on the ballot in November and by February fifth it's law."

Supporters of the new sick-leave law dismiss that complaint, saying that its merits were aired out during the November campaign, which was engineered by a coalition of mostly young restaurant workers. City Supervisor Chris Daly, who wrote the law, says it is a benefit to public health.

"Especially in the flu time of the year — which is right now — folks who are sick, especially with the flu, you don't want them to go to work," Daly says. "You want them to stay home and get better and not get their co-workers and customers sick."

Still, the new law comes after San Francisco hiked its minimum wage to $9.14 an hour. That's the highest local minimum wage in America. And the city still hasn't phased in its requirement for employers to provide health coverage.

"If we want independent restaurants and independent stores and shops you have to make it possible to survive, not just the big guys," Stone says. "Like Starbucks and Wal-Mart and all those things that everybody hates so much. But if you make it too hard to run a small business, only the big guys are going to be able to do it."

Meanwhile, city officials are taking steps to publicize the new law, which could further cement San Francisco's reputation as a social laboratory.