Accessibility links
Loving Barbaro: A Racehorse and His Fans The racehorse Barbaro is recovering this week from his latest setback, a diseased hoof. As he convalesces, an online community of thousands is following his progress breathlessly. Why do so many find Barbaro so compelling?

Listen
Loving Barbaro: A Racehorse and His Fans 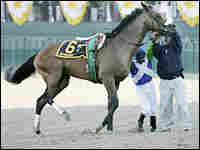 Barbaro is held by jockey Edgar Prado (left) and a handler after the horse injured its right hind leg during the Preakness Stakes in Baltimore, May 20, 2006. Paul J. Richards/Getty Images hide caption 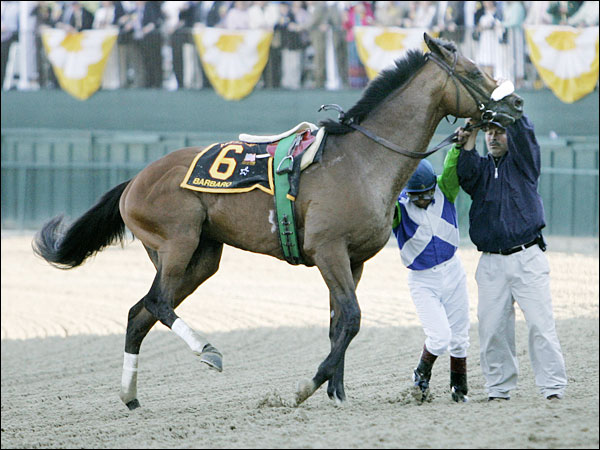 Barbaro is held by jockey Edgar Prado (left) and a handler after the horse injured its right hind leg during the Preakness Stakes in Baltimore, May 20, 2006.

You think you know... but you have no idea.

'Barbaro' (with 'My Immortal' by Evanescence)
'Barbaro... Simply the Best'
'To Barbaro' 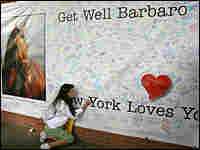 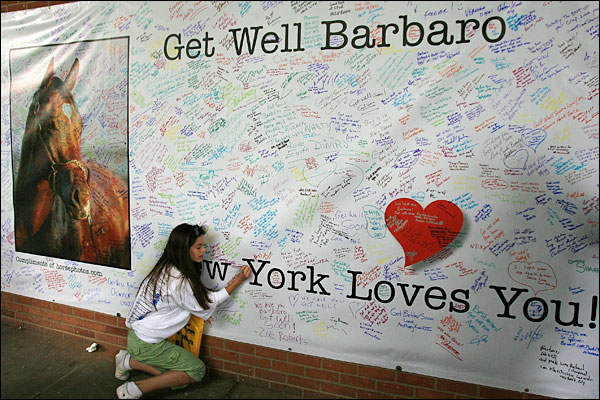 Get-well wishes from the message board at Penn Veterinary Medicine

"My very best wishes for your recovery and for your future which, I pray, will be abounding with humans that look out for your best interests. You are an icon — deservedly so."

"Good morning my darling boy. Lousy weather today, so stay inside, follow Dr. R's instructions, mind your nurses and be a good boy. You have become my favorite patient, equine or otherwise."

"Dearest boy. Sorry to hear about the set-back. But don't let it get you down. No one said it was going to be easy. We just know that if any animal can do it, it's you! Rest and recuperate. Love ya!"

The racehorse Barbaro is recovering this week from his latest setback, a diseased hoof. As he convalesces, an online community of thousands is following his progress breathlessly.

Last spring, Barbaro was a contender for the Triple Crown. He had won the Kentucky Derby and was a favorite to win the Preakness Stakes in Baltimore.

Then fate struck. Not far out of the gate at the start of the Preakness, Barbaro shattered his right hind leg. It was a heartbreaking development, accented by images of his visibly distraught jockey, Edgar Prado. Barbaro's career was effectively over.

But his life as a cause celebre was just beginning. YouTube is full of Barbaro tribute videos and photo montages such as this one, all set to tearjerking music.

At another site, 14,000 candles have been "lit" in his honor. On various message boards, people post fervent messages expressing hope and admiration for the struggling racehorse. One couple even invited Barbaro to their wedding.

These fans seem to know everything about Barbaro — or "Bobby," as some affectionately call him. They even know his doctor's name: Dean Richardson, chief of surgery at University of Pennsylvania's New Bolton Center, west of Philadelphia.

The mere fact that Barbaro has a doctor at this point is a testament to both the horse's status, and to gains in veterinary medicine. A broken leg has historically been a life-threatening injury for a horse, and in years past, he would have been put down.

But now Barbaro is getting the best in veterinary care at New Bolton — and his fans are waiting anxiously for his full recovery. But what's the point of writing a get-well message to a horse? Barbaro may be a legend, but certainly he can't read?

Gail Luciani, director of communications at New Bolton, answers, "People understand that Barbaro can't read, but that certainly the staff can, and they want to give any type of encouragement that they can to the faculty and staff."

Still, the Barbaro fever clearly goes beyond boosterism for his veterinary staff. One woman says that following Barbaro helped her get her faith back after a family tragedy. Another said he may have saved her marriage. One fan says she found about about an injured trainer through the Barbaro community, and is now raising money for him.

"If I feel that I'm doing a good job for somebody, I don't care if a horse inspired me to do so," Mercy Turano says. "I'm grateful that I've got the opportunity and I'm thankful."