Accessibility links
Planned 'Divine Strake' Bomb Test Incenses Locals The Defense Department is planning to detonate 700 tons of non-nuclear explosives at the Nevada Test Site. Called "Divine Strake," the test is part of the military's effort to design "bunker-busting" explosives. Many locals and "downwinders" in Nevada and Utah object to the test.

The Defense Department is planning to detonate 700 tons of non-nuclear explosives at the Nevada Test Site. Called "Divine Strake," the test is part of the military's effort to design "bunker-busting" explosives. Many locals and "downwinders" in Nevada and Utah object to the test.

The government is calling it Divine Strake, an explosion of 700 tons of ammonium nitrate and fuel oil at a former nuclear test site in Nevada. It is designed to gather data on destroying underground tunnels. The test has been delayed twice, thanks to public and political pressure. Now, the government is reaching out, trying to convince people that it will not kick up radioactive soil at the site.

But as NPR's Ted Robbins reports, that's been a tough sell.

TED ROBBINS: Here's what you saw if you were one of the 300 or so people entering a meeting room at the Dixie Center in St. George, Utah - government experts like Michael Skougard of the NNSA, the National Nuclear Security Administration, standing next to posters with photos of enemy missiles and headlines like "Foreign underground facilities are a growing threat."

What you heard in the room was skepticism.

Unidentified Woman: How can we believe any of this when they've lied every time?

MICHAEL SKOUGARD: All I can tell you is that we are being open to the public with everything that we're doing here.

ROBBINS: To understand this mistrust, you have to go back to the 1950s. St. George was a small town, about 135 miles from the Nevada test site, downwind. When the government tested 100 above-ground nuclear weapons, this is where the fallout landed. All around this meeting room, people talk about parents, siblings, themselves, battling cancer and radiation poisoning. In the mid-'80s, after a long court battle, the government settled with the people who came to be known as downwinders.

In the middle of the meeting room is one of them. Michelle Thomas sits in a wheelchair. She has an autoimmune disease. She's also had ovarian cysts, a mastectomy, a salivary gland tumor and a thyroid disorder. She's quietly sobbing.

MICHELLE THOMAS: My mother went to one of these meetings in 1951 when she was pregnant with me, and they said there would be no danger.

ROBBINS: Divine Strake is a non-nuclear test, but it will create a 5,000-foot mushroom cloud. And in that cloud, some people fear, will be radioactive soil from earlier nuclear tests on other parts of the test site. An environmental assessment says that no dangerous particles will be released. So Darwin Morgan of the NNSA said this meeting was held to answer questions and calm emotions.

ROBBINS: Of course, without public outcry, it's likely the test would've been conducted. Nevada Indian tribes sued to halt the test. Utah and Nevada Congress members called for closer scrutiny. At least one local official in Nevada has pointed out that the environmental assessment does not look at small inhalable dust. Darwin Morgan again.

MORGAN: That's the type of comments that we're looking at, to see is that something that we should've looked at?

ROBBINS: But people here don't even seem to trust the test's stated purpose, which David Rigby says is purely scientific. Rigby is with the Defense Threat Reduction Agency, part of the Pentagon. He assures doubters that Divine Strake will just update existing data on how much force it takes to destroy enemy underground tunnels.

THOMAS: Kim Jong Il, the gentlemen in Afghan-- all of them - they'll say we have to have these weapons because of these rogue dictators. Well, to do what we're doing to our own people, that's what a rogue dictator would do.

ROBBINS: The decision now is whether to proceed with Divine Strake based on existing data or to do a full-blown environmental impact statement complete with public hearings. Utah's governor is scheduled to hold a public hearing of his own in St. George tonight. But if this meeting is any indication, no one here will be satisfied unless Divine Strake is cancelled. 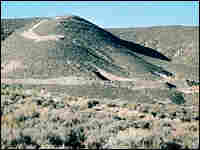 A tunnel in this hillside at the Nevada Test Site will be the home of a large bomb June 2. DTRA hide caption 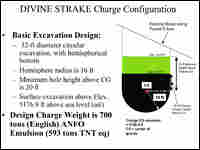 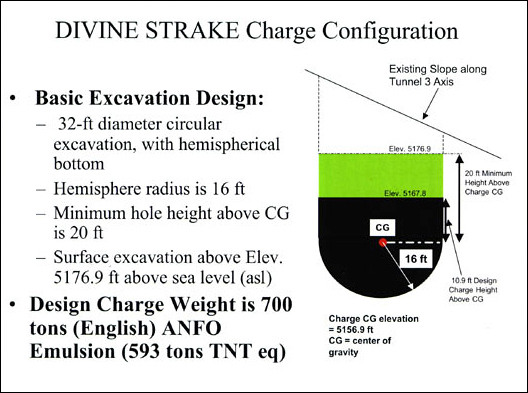 A schematic shows the makeup of the 700-ton "Divine Strake" bomb.

The Pentagon has labeled it "Divine Strake," the detonation in the Nevada desert of a record-setting superbomb. The official line is that this is the test of a new bunker-busting weapon. But weighing in at 700 tons, the bomb cannot be delivered by any existing planes or missiles, experts say.

Insiders believe the test is actually meant to simulate the effects of a tactical nuclear weapon on underground tunnels, as a prelude for the Defense Department making a case to Congress for developing a new line of nuclear weapons to penetrate entrenched sites, such as those in North Korea and, it is believed, Iran.

The project is being conducted by the Defense Threat Reduction Agency, which says the tests will be used to enhance existing computer modeling to help design future munitions. On the agency's Web site, it explains that as governments construct command operations that may include weapons of mass destruction, "The U.S. military must be able to defeat hard and deeply buried targets in order to deny an adversary the ability to use these facilities against us."