Accessibility links
Black Power on Display in New Congress With Democrats in control of Capitol Hill, blacks in the House wield unprecedented power. Black lawmakers with long seniority will take over key committees in the 110th Congress.

With Democrats in control of Capitol Hill, blacks in the House wield unprecedented power. Black lawmakers with long seniority will take over key committees in the 110th Congress.

Democrats in the House of Representatives yesterday completed their 100-hour agenda with time to spare. They passed a bill that would rollback some tax breaks for oil companies. It was the last of six bills the democrats promised to deliver when they took control of the House. Now those bills move on to the Senate, where they're likely to undergo significant changes. And President Bush has threatened to veto at least two of the bills. Still, House democrats are getting a lot of attention and not just for their legislative agenda.

The House is led by a speaker for the first time in history who's a woman. And African-American lawmakers are playing a more prominent and powerful role than ever before. Five House committees and at least 10 sub-committees are chaired by blacks, giving African American legislators unprecedented clout and authority.

Representative STEPHANIE TUBBS JONES (Ohio, Democrat): Others coming behind me will be judged by what I do and how I handle this job. So it's additional responsibility, but I accept it. I thank God that I'm a gorgeous African-American woman and will have the opportunity to lead the discussion.

NAYLOR: Tubbs Jones is not the only person of color in the upper echelons of power in the House. There's James Clyburn of South Carolina who, as majority whip, is the third ranking member of House leadership. Charles Rangel from New York chairs the Ways and Means Committee. Bennie Thompson of Mississippi chairs the Homeland Security Committee. Juanita Millender-McDonald of California chairs the House Administration Committee. And John Conyers of Michigan, 42 years ago, started down the path that has led him to become chairman of the Judiciary Committee.

Representative JOHN CONYERS (Democrat, Michigan): This is hugely significant. When I first came to congress, I went to the speaker of the House, John McCormick, and put in a plea as a new lawyer that I should be the first African-American to go to the Judiciary Committee, and he agreed.

NAYLOR: Now Conyers is the dean of the Congressional Black Caucus, which includes 43 members. And while many of those lawmakers represent urban districts, Conyers points out there are many different views.

Rep. CONYERS: It's not a monolithic operation anymore. We have people that are in the blue dog caucus, people from majority rural areas, and that brings them to different positions on things.

NAYLOR: Conyers hopes to address a wide range of issues on the Judiciary Committee. Everything from studying the possibility of reparations for African-American descendants of slaves to the disparity in prison sentences between users of powder cocaine and crack cocaine, which breaks along racial lines. Tubbs Jones, who sits on the Ways and Means Committee, along with her duties as chair of the Ethics Panel, points to business and trade issues and says there isn't really a separate black agenda.

NAYLOR: These lawmakers say they bring unique perspectives to their role as leaders by virtue of their personal experience as black Americans. But Mel Watt, a black democrat from North Carolina, says the African-American chairman didn't get to be chairman because of their race.

NAYLOR: And whether it's opposition to the war in Iraq or fighting to increase homeland security grants, African-Americans are leading the discussion in this congress as never before.

MONTAGNE: To read profiles of black leaders in the House, go to our Web site, npr.org.

At a Glance: Black Leaders in Key House Posts 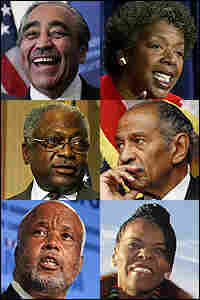 The 110th session of Congress has an unprecedented number of African-American lawmakers in key positions of power. Black lawmakers with long seniority are taking over committees with influence on such fundamental issues as taxes, homeland security, trade and Social Security.

Some of these representatives – such as Charles Rangel and John Coyners – have been in Washington for decades. Coyners, who was first elected in 1964, helped establish the Congressional Black Caucus in 1969.

The Black Caucus gradually accumulated considerable influence on Capitol Hill, until the Republican takeover of Congress in 1994. Since then, Caucus members have seen their influence wane, rarely winning the ear of the Bush White House.

But last November's election brought a massive reversal of fortune for the Caucus. Now six of its members are poised to have a considerable impact on what happens in the House in the next two years. Here, a guide to who's who: