Accessibility links
Ney to Serve 2.5 Years in Abramoff Bribery Scandal Former Ohio Rep. Bob Ney is sentenced to serve two and a half years in prison for his part in a bribery scandal still roiling the ranks of members and lobbyists in a wide-ranging corruption probe. Over four years, Ney took bribes; vacationed on others' tab; and gambled with other people's money. 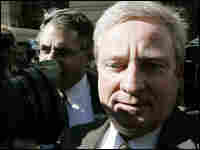 Former Rep. Bob Ney leaves U.S. district court in a file photo from October. He was sentenced to two and a half years in prison on Jan. 19 for conspiracy and making false statements in the Abramoff scandal. Mark Wilson/Getty Images hide caption 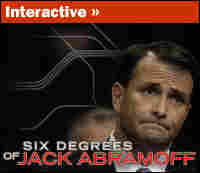 Find Out Who Else Has Been Linked to Abramoff, and Why

Former Ohio Rep. Bob Ney is sentenced to serve two and a half years in prison for his part in a bribery scandal still roiling the ranks of members and lobbyists in a wide-ranging corruption probe.

Ney, the only congressman charged in the Jack Abramaoff corruption and bribery scandal, was sentenced to 30 months in prison.

Mary Butler leads the Justice Department's team in the Abramoff case. She rarely speaks in court. But Friday morning, she personally made the argument for increasing the two-year sentence that Ney's lawyers were seeking.

Over a period of four years, Ney had solicited and taken bribes; vacationed on Abramoff's tab in Scotland; and twice gone gambling in London casinos with other people's money. In exchange, he had tried to influence contracts.

Huvelle took note of Ney's 26-year career in public service. But, she said, "Whether or not you have represented your constituents well on one level, you violated the public trust."

Ney was tight-lipped, but calm and almost matter-of-fact. Before the sentence was handed down, he read a statement, saying he was "thankful" for his career in public service, and "sorrowful" that he had let it end this way.

As he has before, he took responsibility for the crimes, and said he will battle "the demons of addiction that are within me."

Huvelle is recommending that Ney serve his sentence in a treatment program for drug and alcohol abuse, at a federal prison in Morgantown, W. Va. That's also not far from Ney's family, in southeastern Ohio.

Besides Ney and Abramoff, six others have been charged or pleaded guilty in the probe. The House Ethics Committee extracted a small fine from Rep. Tom Feeney (R-FL), for trips he took at Abramoff's expense.

A former top official at the Interior Department, Steven Griles, has also been told that he is also a target of the probe.