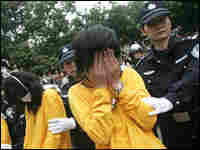 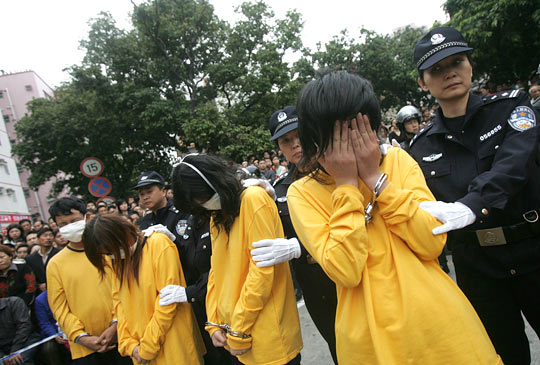 Police put suspected prostitutes, pimps and their clients on display in Shenzhen, China, Nov. 29, 2006. Police read aloud the names, ages and hometowns of the handcuffed men and women. 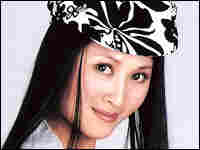 Actress Zhang Yu claims to have slept with famous directors and producers to obtain each of her 20 film and television roles. She backed up her claims with self-made videotapes of the encounters. Courtesy Zhang Yu hide caption

In China these days, people are talking about sex — extramarital affairs, prostitution and rich men taking mistresses. Many are worried that sex is becoming a commodity, leading to the exploitation of women. This comes after years of government efforts to eradicate traces of pre-communist decadence.

It's a weeknight in Shuyang, a county town in East China's Jiangsu province. A 32-year-old pharmaceuticals merchant nicknamed Xiaona goes singing with friends at a Karaoke parlor. Her companions don't know what she's been through recently. To keep it that way, she asked that her full name not be used.

In an interview upstairs from a local discotheque, she talks about a businessman she met here three years ago. The man's wife could not bear him children. Xiaona herself was already divorced with one daughter.

Xiaona then had a daughter and a son by the businessman. But the relationship fell apart, and the two fought for custody of the children.

Xiaona says she now realizes that the businessman was simply using her to produce a male offspring to continue his family line.

"I don't care how people criticize me," she says. "I've got to face what I've done. They can say I was somebody's mistress or whatever, it's not important. I just hope that my three children will someday understand me and know that their mother has not had it easy."

One of the hardest things Xiaona had to do was to conceal the birth of her son from family planning officials, who could have penalized her for violating China's one-child policy. She says she gave birth to her son at home. Then she paid an acquaintance to procure a dead fetus from an abortion clinic.

"I put the dead fetus and some bloody tissues in my bathroom at home. The next morning, I called the family planning officials and told them that I gotten drunk, fell down and had a miscarriage. Of course, it was all a lie."

The Mistress as Status Symbol

Zheng explains that in traditional China, men could legally have multiple wives and concubines. The practice was banned under Chairman Mao and remains illegal.

But in recent years, having an "ernai" or mistress, has once again become a male status symbol because it shows that the men can afford to have one. Zheng says many Chinese still consider the practice — and the mistresses — disgraceful.

"Because they're seen as morally suspect, people think they have no rights," Zheng says. "However, they may be punished, criticized or even deprived of their rights. Some people just think they're getting what they deserve. That's not fair."

Zheng says that even though extramarital affairs may be illegal, the people involved still have rights. Many people share his opinion. A recent example was the public reaction to what police did in the southern boomtown of Shenzhen, just north of Hong Kong.

On November 29th, police there put nearly 100 suspected prostitutes, pimps and their clients on display in the street. They read out loud the names, ages and hometowns of the handcuffed men and women.

This sort of public shaming is a vestige of China's centuries-old legal system. In an online opinion survey, 70 percent of respondents condemned the Shenzhen police for violating the suspects' privacy and dignity. Legal experts say the public shaming of suspects is illegal.

There's also been a fierce debate about classified ads for domestic servants in several Chinese cities. In addition to cooking and cleaning, these maids are required to provide sexual services to their employers.

Wang Yi is Secretary General of Women's Watch China, a women's rights group in Beijing. She says this phenomenon arises from poverty and ignorance, as well as population and employment pressures.

"These women come from remote rural areas. They're mostly over 35 or 40 years of age. Their homes and families are very poor and have little education. We feel this is a severely disadvantaged group of people."

The men who employ the domestics are mostly over 50 years old and divorced or widowed.

"As they struggle to make a living, more and more of these disadvantaged women are being tricked and exploited," Wang says. "Women's rights activists and the government must teach these women to protect themselves."

Many Chinese are also outraged about extramarital affairs in cases of official corruption. According to state media, 95 percent of Chinese officials investigated or punished for corruption were also found to have mistresses, many of whom were pampered with public funds.

Demanding for sexual favors in exchange for career advancement or business deals has become widespread in many industries, observers say. Take show business, for example.

An aspiring young actress Zhang Yu recently rattled China with her story. She's had some 20 film and television roles, and she claims to have slept with well-known directors and producers to secure each one. And she has released video footage of all her casting couch encounters.

In an interview, Zhang says that for six months after graduating from arts school, she was unable to land any acting roles, because she refused to obey what she calls the unspoken rule of the casting couch. Then a director offered her the role of a concubine to the emperor in a costume drama.

"In total frustration, I said, 'The heck with it.' I decided to give in to him. I really wanted that role. But in the end, he played me and went back on his word. I was crushed. I thought, is this business really so hard for girls to succeed in? Why did I lose so much and get nothing in return?"

Some people have lionized Zhang for taking on the male-dominated entertainment establishment. Others dismiss her as a self-promoting opportunist. She rejects any suggestions that she willingly bedded the directors.

"How could I have willingly done this? If I were willing, why would I videotape all of it?"

Zhang recently lost a lawsuit against directors she claims she slept with. She's says she's planning more legal action, as well as a tell-all book about her experiences.