Accessibility links
Crossing the Divide: An NPR Series With the 2008 presidential election looming, a small window of opportunity exists for the White House and Congress to find common ground and accomplish some goals for the American people. But what's the best way to do it?

Crossing the Divide: An NPR Series

Crossing the Divide: An NPR Series 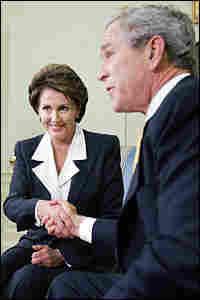 The elections of November 2006 brought Democrats to majorities in Congress, forcing President Bush to share power in Washington and pay attention to his opposition in ways he did not in the first six years of his presidency

The president immediately pledged to be as bipartisan as possible.

The new majorities also changed life on Capitol Hill, where the floor bosses of the two parties in both chambers have swapped roles, and where all the committees are suddenly under new management. In many cases, especially in the House, the agendas of the new chairmen are almost 180 degrees different from those of their Republican predecessors.

The Democrats immediately pledged to be as bipartisan as possible.

Of course, the Democrats in the House immediately passed a flurry of their own preferred bills while allowing no Republican amendments. And President Bush just as immediately announced a new build-up of troops in Iraq that he knew would be opposed by the vast majority of Democrats in Congress.

In one sense, true or pure bipartisanship is impossible in a political system almost entirely organized around partisanship — the rivalry of major parties. It is akin to asking for agreement between two sets of lawyers hired to be adversaries. Arguing is what they do, and they are paid to insist on their viewpoint.

But in another sense, the American political system is about satisfying the majority without making life too onerous for the minority. We expect all sides in any controversy to state their principles and serve their interests, but we also ask them to respect the need for resolution in the end. The more important the issue, the more important it is to reach that resolution.

Everyone who enters the public arena soon learns that the struggle is not the end product. The struggle is a means. In the end, all parties have to find some means of give and take. They have to cross the space that divides them.

This takes place in a variety of ways. We are familiar with the process because it is so familiar. Nothing is more characteristic of our daily lives than conflict with other human beings. This goes for interaction between individuals and also for the friction between groups, large or small.

But overcoming conflict is also basic. It is fundamental to civilization and social evolution. It enables our lives to be something more than a daily struggle to survive.

Dealing with conflict at all levels — from the most primitive to the most sophisticated — is a common experience. Sometimes we resolve conflict with a show of will or the use of force. But most of the time, we find a way of weighing the values and making some kind of deal.

Life in a democracy requires debating issues and taking votes. But it also requires a willingness to commit to something else: an investment in give and take. In a democracy, no one can expect to call all the shots all the time — and no one should want to. Understanding contrary positions is both a talent and a learned skill. The best leaders value their principles and pursue them, but always with the knowledge that at some point, you have to make the deal. You have to open your eyes and ears to the other side. You have to cross the divide.

Over the course of the next week, NPR News will present a special series of reports across all of its news programs. Crossing the Divide will explore the pros and cons of bipartisanship in Washington, and feature examples of compromise and cooperation from politics, business and everyday life in America. With the 2008 presidential election looming, a small window of opportunity exists for the White House and Congress to find common ground and accomplish some goals for the American people. But what's the best way to do it?

Was there a time when Americans got along better, or did we get that idea from watching old movies? Is there still a spirit of national inspiration that is shared by our public servants, regardless of party or ideology? Do our national symbols help bring us together?