Accessibility links
Circus Brings Joy, Focus to Afghan Children In Afghanistan, children have little time to play. If they are not in school, boys and girls are usually working in stores, or hawking gum, washing cars or begging in the streets. But some have found fun and support performing in a special circus. 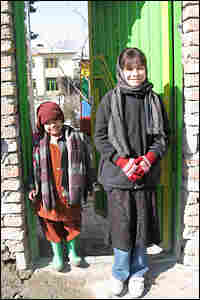 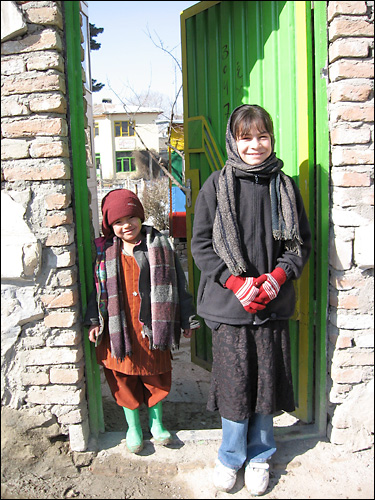 Fariya, 6, and her sister Parisa, 11, stand at the entrance to the Afghan Mobile Mini Circus compound. 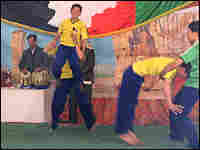 Acrobatics is just one of the many skills taught at the Afghan Mobile Mini Circus for children. Soraya S. Nelson, NPR hide caption 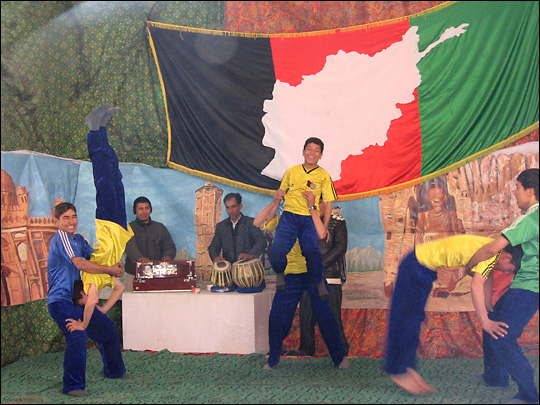 Acrobatics is just one of the many skills taught at the Afghan Mobile Mini Circus for children. 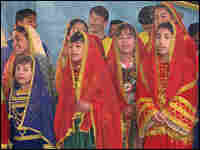 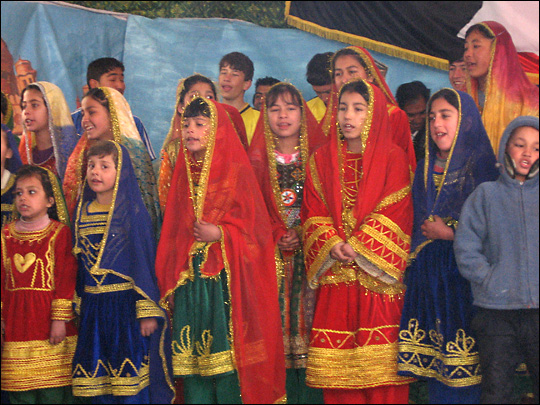 In Afghanistan, children have little time to play. If they are not in school, boys and girls are usually working in stores or hawking gum, washing cars or begging in the streets. But in one far-flung suburb of the Afghan capital Kabul, teachers and performers are trying to restore fun to kids' lives.

The fun happens at the makeshift campus of the Afghan Mobile Mini Circus, where children are the attraction and audience rolled into one.

Children like 6-year-old Fariya, a tiny sprite, spin plates on thin sticks and juggle all manner of objects, from pins to balls.

It's more than a show. The circus, located inside a muddy, brick compound, is also a before- and after-school program, a playground and a school. There are 44 different subjects taught at the facility to 350 children, who attend for free. Classes include Islamic studies, embroidery, animation, radio production and computer science.

Founder David Mason says when they take their show on the road, it's to educate as much as to entertain. They teach life-saving subjects, like how to recognize and avoid land mines, or the importance of washing hands.

All of the lessons are delivered with slapstick humor and wacky props, like giant hands made out of foam and silk.

Mason himself is an enigma. Of Iranian-Danish descent, he's the epitome of wanderlust. Before starting the circus, he used to teach salsa dancing and Argentine Tango in Denmark and Australia.

His first foray into Afghanistan was in 1988, when he lived with the Mujahedeen. Mason says he was doing "research." He refuses to divulge more.

He took his life savings and went to Pakistan in early 2002. But no aid agency would sponsor him. He says they wanted to build clinics and schools. The idea of a circus just didn't fly.

Mason pushed ahead on his own and was arrested when he arrived in Kabul in April 2002. Afghan agents interrogated him. They let him go, but he says he was followed for a while.

He launched the circus in a cargo container. Danish freelance journalist Berit Muhlhausen, who co-directs the circus, made sure word of the performances spread.

Donations began trickling in. Soon they rented a home in a Kabul suburb. They knocked down the wall to a second rental home and created the compound they use today. They pay $4,000 a month in rent.

Per Afghan and Islamic tradition, girls and boys are taught in separate classrooms. But they perform together on a makeshift stage inside a brick structure with a roof made out of discarded U.N. bags.

The 14 Afghan teachers and performers who work for the circus are paid a modest $200 per month. About half of them travel across Afghanistan to perform in provincial schools. Mason says it's too dangerous to let the students travel.

But the children do perform overseas. Fariya's brother recently returned from Japan. Their sister, Parisa, went to Germany and Denmark. A trip to California is planned in 2008.

Parisa, who is 11, has big dreams. She wants to be a cardiologist. Such self-confidence is new among poorer Afghans, especially girls. It's something head teacher Zahera Popal Delavarzadeh is particularly proud of.

Mason says he'd like to start his brand of circus in other countries. But for now, he has his hands full keeping the Afghan version afloat.