Accessibility links
Libby Judge Rose Above a Troubled Youth Judge Reggie Walton says he was once a young man on the brink of a wasted life, getting in trouble with the police, before he focused on getting to college and law school. 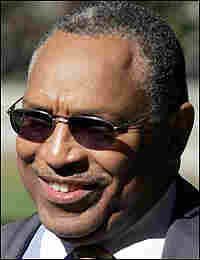 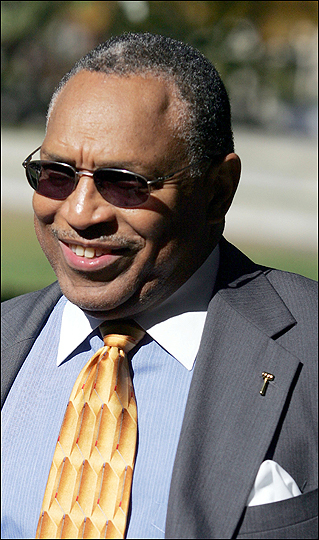 U.S. District Judge Reggie B. Walton at the federal courthouse in Washington, D.C., in November 2005.

Jury selection is expected to be completed today in the trial of former vice presidential aide Lewis Libby. Libby is accused of lying to federal investigators about his contacts with reporters regarding the undercover CIA identity of Valerie Plame.

Running the trial is Judge Reggie Walton, who has a story of his own.

Walton grew up near Pittsburgh in a steel mill town, and survived a tough period as the industry declined and the mill finally closed. His father was unemployed for two years before finding work as a janitor.

Walton got in trouble with the police, ending up in juvenile court three times for fighting. He also had a struggle to get through school. Despite poor reading skills, he managed to get to college and then law school.

He worked as a public defender in Philadelphia, where he says his first client accused of murder had confessed after being beaten by someone working for the police. On the other hand, he defended a young man accused of brutally beating an elderly woman. Walton convinced the jury that there was a reasonable doubt that his client had committed a crime. Leaving the courtroom, he says, the young man said, "we beat that one, didn't we, brother?"

Sickened by that experience, Walton became a federal prosecutor and later was appointed his first local DC judgeship by Republican President Ronald Reagan, although Walton was a Democrat. Today, he declines to identify his party affiliation, saying it shouldn't impact a judge's work.

As a teen, Walton thought his ticket to success would be pro football, but under the guidance of an 11th grade teacher, he realized that he was too small for that to be a realistic goal. He worked hard, but gives a lot of credit to affirmative action programs for giving him a boost into law school.

Walton says he sits in judgment on a lot of young black men, and sees himself in them, and he spends a lot of time going to YMCA's and juvenile lockups, trying to inspire them, to help them the way others helped him.