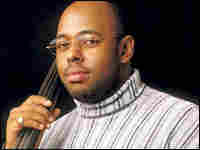 Growing up in Philadelphia, Christian McBride learned how to play bass from his father and uncle. His grandfather taught him how to be cool. McBride has played with jazz legends McCoy Tyner and Freddie Hubbard, as well as pop artists BeBe Winans and Sting. Deborah Feingold hide caption

I believe people have become tighter, meaner and less tolerant than ever. I never remember people being so uncool. I don't remember people getting the third degree because they decided to wear brown shoes instead of black. If you get too close to someone on the road, they want to get out and shoot you for possibly hitting their car. What's wrong with these people?

I believe it pays to be cool. Most people in this day and age are always terribly stressed and hypersensitive to absolutely everything. They will age quickly. Cool people stay young forever.

Ten years ago, cell phones were still a luxury. People still had "land lines" for their primary phone numbers. Remember when it was okay to have dial-up? Now, people don't even bother asking for a home number anymore. Is it because we're so busy, people don't even bother being at home anymore? Or is business so important that people need to get in touch with you upon demand? Didn't people survive just fine not being contacted by their boss while having dinner with their families?

As for the Internet, it amazes me that when you walk into a Starbucks, it looks like CompUSA with all the doggone laptops and people stressing out over whatever. When people need to work on stressful work-related issues on their laptops, they go to Starbucks to drink coffee?

Me, on the other hand, I'm cool! Why do I know that? Because I sleep well at night, and I work with people who apparently like to work with me.

Now let me make something very, very clear: I'm not always cool. I've had my meltdowns in life. Once I had a musician in my band who was a little less than cool — he was flat out lazy! After 15 months of playing the same music, he never bothered to memorize it. Instead of pulling him aside and addressing the situation like a rational person would have done, I let him have it like I've never let anyone have it before. After it was over, I realized that I'd cleared the room. Everyone was so scared (or annoyed), that they just left. Well, "lazy guy" left the band and has never spoken to me ever again. I'm very sorry for that. I wish I could have that moment back, but I can't. I can only learn from that, and I try very hard not to have another meltdown, ever.

Pleasing everyone doesn't always mean saying "yes" or "that's great" or "no problem." Sometimes you have to say the opposite, but with a clear, sensible and gracious tone. Being cool is not what you say or do, but how you say or do it.