Accessibility links
'Dreamgirls,' 'Babel' Top Oscar Nominees Dreamgirls is nominated for eight Academy Awards, but not for Best Picture. Babel, which is among five nominees for the top film, earns seven nominations. 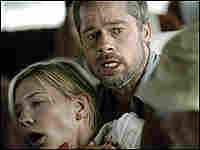 Dreamgirls is nominated for eight Academy Awards, but not for Best Picture. Babel, which is among five nominees for the top film, earns seven nominations.

Here's a complete list of the 79th Annual Academy Award nominations announced Tuesday at the Academy of Motion Picture Arts and Sciences in Beverly Hills, Calif., provided by Associated Press:

12. Cinematography: "The Black Dahlia," "Children of Men," "The Illusionist," "Pan's Labyrinth," "The Prestige."

18. Documentary Feature: "Deliver Us From Evil," "An Inconvenient Truth," "Iraq in Fragments," "Jesus Camp," "My Country, My Country."

Best Picture? Five Picks Ahead of the Nominations

Best Picture? Five Picks Ahead of the Nominations

Kim Masters couldn't wait for the nominees to deliver her list of the top five films: The Departed, The Queen, Little Miss Sunshine, Dreamgirls and Babel.

See the Nominees at Oscar.com

Nominations for the 79th Annual Academy Awards will be announced later this morning. NPR Entertainment correspondent Kim Masters is on the Oscar watch. And she's here with a preview of some possible nominees.

MONTAGNE: So Kim, when we last spoke, you remarked how up in the air this year's best picture contest was. It's still up in the air?

MASTERS: Well, it's still up in the air, but I am willing to go out on a limb this morning a few hours before we know the answer and pick my five that I think will be nominated. And they are - in no particular order - "The Departed," "Dreamgirls," "Little Miss Sunshine," "The Queen," and "Babel."

MONTAGNE: What about Martin Scorsese - amazingly, never won an Academy Award. Is this his year?

MASTERS: It could be. "The Departed," his cops and robbers movie, could split. A lot of people think it may or may not win best picture, but if it doesn't win best picture, they think that Marty Scorsese will finally get a Best Director award. And for those who haven't had a chance to see it or want to be reminded of it, is what "Departed" sounds like.

(Soundbite of movie, "The Departed")

Mr. LEONARDO DiCAPRIO (Actor): (As Billy Costigan) When are you going to take Costello, huh? I mean, what are you waiting for? Honestly, I mean, do you wanted to chop me up and feed me to the poor, is that what you guys want?

Mr. MARTIN SHEEN (Actor): (As Oliver Queenan) Will you shut up? We are building a case, and it takes time. You know that.

MONTAGNE: And, Kim, Martin Scorsese actually did win best director at the Golden Globes, even though "Departed" - which we've just been listening to -didn't win.

MASTERS: That's right. And the Golden Globes don't necessarily, you know, predict the Oscar outcome - although this year it may, because a lot of the acting categories seem to be locked up. So some Globe winners may be getting the Oscar nod. Certainly, we will see a nomination and likely win for Helen Mirren in "The Queen." And Eddie Murphy, who won for Best Supporting Actor in "Dreamgirls," will also probably go up there, as will Jennifer Hudson.

Now, we feel at this point that a lot of people may have heard Jennifer Hudson sing the big number from the movie, so we're going to give you a clip from Jake Gyllenhaal's send up of it earlier this month on "Saturday Night Live."

MASTERS: Yeah, that's it. That is Jake Gyllenhaal, of course, who was in last year's nominated picture, "Brokeback Mountain." For those of you who didn't see it, he was in a lovely evening dress.

MONTAGNE: So Sacha Baron Cohen, "Borat," he won a Golden Globe for Best Actor in a comedy. What are his chances?

MASTERS: Yes, he did. He won Best Actor, and he may well be nominated. The Academy isn't often that generous with comedy performances. And I think that Best Actor category probably belongs to Forest Whitaker for "The Last King of Scotland," although I have a soft spot also for Peter O'Toole in "Venus." So we may see a nomination for him nonetheless, and that would be a big triumph for a film that was that off the wall.

MONTAGNE: There's always a movie that gets a big push from a studio's Oscar campaign. This year, how influential is the campaigning been? It doesn't seem so much.

MASTERS: Well, it is. I think people don't really know what works and what doesn't work, so a lot of it is just keep throwing spaghetti at the wall and hoping it sticks. I think a lot of people are impressed with "Little Miss Sunshine," which opened months and months ago and is very much in the game. Also, even though "United 93" may not get nominated, given the difficulty of the subject matter, I think it's been in the conversation a lot, and a lot of people are very impressed with how Universal it's handled that campaign.

MONTAGNE: And, of course, the Oscar nominations will be announced this morning for the West Coast at 5:30 a.m., Pacific Time. Kim, thanks very much.