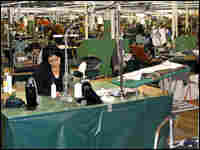 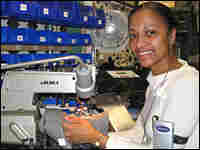 Odette Almeida, from Angola, says she likes the new manufacturing system, because it allows her to move more and reduces aches and pains. Frank Langfitt, NPR hide caption 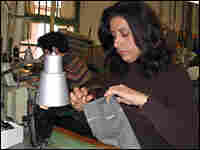 Louise Sanchez has been with the company for 17 years. She says the new "lean" manufacturing system puts more pressure on her to work faster. She's not a fan. Frank Langfitt, NPR hide caption

If you check the tag on a men's suit these days, chances are it says "made in China" or Mexico — maybe even Hungary.

But if the suit is a Joseph Abboud, it still says "Made in America." In fact, the company is one of the few that continues to produce suits in the United States. And instead of sending jobs overseas, Abboud is hiring more people here at home.

The company's factory is located in Bedford, Mass. The town once employed more than 5,000 workers making men's tailored clothing.

"Today, this is the only remaining factory," says Tony Sapienza, the chief operating officer of Joseph Abboud.

Last year, Sapienza hired 90 new workers. He has to pay them $4 an hour more than his foreign competitors pay their employees. But by keeping production in the United States, he says he can use higher-skilled workers to make the company's $700-$1,000 suits. And he can get those suits to stores ahead of the competition without some past problems.

"We had a truck hijacked by Mexican bandits before it got to the border," Sapienza recalls. "And we lost an entire shipment of 4,000 suits and disappointed our retailer, who subsequently said he couldn't trust us and moved the production to a different brand."

Sapienza also wants to pick up the pace on the factory floor. He's building what's called a lean manufacturing system, so he can respond to hot sellers and get tailored suits to customers in just a week.

"Today, if a Nordstrom wants more Joseph Abboud product in the middle of September — because the weather turned cold and folks ran into the store and started buying suits and stripes were popular — we can't deliver mid-season goods," he says. "Whereas in a lean environment, if we can make a sufficient quantity in a two or three-day cycle and ship it to the store, we can actually fill replacement orders and drive a business."

There is no magic to lean manufacturing. Under the old system, employees stitched pieces on their own. In a lean system, they work in teams, rapidly moving fabric through a circuit.

They are also trained in various skills, so if pieces back up, they can jump to another job.

Some workers like the new system. Others don't. Among the latter group is Louise Sanchez, who has worked for the Abboud factory for the past 17 years doing the exact same thing: stitching sleeves.

Sanchez preferred working alone at her own speed. Now, she's part of a team. And if she doesn't move fast enough, other workers give her a hard time, because it affects everyone's pay.

"It was just me doing a bundle. And I used to finish the bundle, tie it up and just put it aside," she says. "But now, I do a sleeve and I have to pass it on to the other operator. It's just, it's just a little nerve-wracking."

But Sanchez's coworker, Odette Almeida, is a fan of the new system. Almeida is not earning quite as much under the team-pay structure, but she says doing a variety of jobs is better for her muscles.

"I'm moving more," Almeida says. "It's better for my body, right. I feel it in my neck, because all day it was the same position. Now, I'm moving more. It feels better."

Workers like Almeida could have fought the changes. After all, they're members of a union, UNITE-HERE. But instead of resisting, union leaders actually helped management sell the new system to its members.

The union also had to give up some strict work rules to help the company compete.

Warren Pepicelli is a vice president with UNITE-HERE. He says that after seeing so many jobs go overseas, the union knows it has to be flexible.

"Knowledge does not come suddenly," Pepicelli says. "It comes through years of experience — and sometimes, comes through knocking your head against a wall."

So far, the Joseph Abboud formula seems to be successful. Last year, the factory increased production, and sales are up 15 percent. In a world where pressure from low-wage labor is intense, Sapienza expects the strategy to work for five years.

After that, he says the company will have to change further to stay competitive.