Accessibility links
Does 'Dreamgirls' Offer Lowdown on Motown? The movie, nominated for eight Oscars, is a thinly veiled account of Berry Gordy's empire and his banner group, the Supremes. But many Motown stars say the film doesn't reflect the real story. 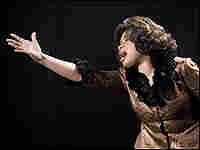 The movie Dreamgirls tells the story of the rise of a small black record label and the ups and downs of its star girl group. The plot draws quite a bit from the story of Motown Records, its founder Berry Gordy Jr., and the Supremes. But how much of the saga of show-biz betrayal is real and how much is fiction?

Jennifer Hudson, who plays Effie White in the movie, won a Golden Globe for her performance (and is nominated for an Oscar in a supporting role). Hudson dedicated her Golden Globe to "a lady who never really got a fair chance, Florence Ballard ..." Many believe Ballard is the prototype for the character Effie.

As the lead singer for the Dreams, Effie is replaced by the thinner, prettier Deena, who bears a close resemblance to Diana Ross in clothes, makeup and accessories.

Mary Wilson, one of the other original Supremes, grew up in the Detroit projects with Diana Ross and Florence Ballard.

Wilson says Ballard "was sort of overlooked within the group in terms of being the main singer, so therefore her talents were never really used."

Eddie Holland — who with his brother Brian and Lamont Dozier wrote most of the Supremes' biggest hits — says Ballard was never pushed out of a lead singer role.

"Florence was never a lead singer, per se," he says. "Brian and Lamont and I knew that Diana Ross would be the lead singer," Holland says. "Diana's voice is extremely unique and very sensuous ... and that had a lot to do with the success of those records."

Berry Gordy did use Ballard as lead singer on a song he wrote in the early days of the Supremes, called "Buttered Popcorn."

The song puts Ballard's soulful voice on display, but also shows she might not have had the right quality to help the Supremes cross over to a white audience.

"She had a much more 'soul' kind of voice than Diana Ross," says Gerald Early, who wrote a book about Motown called One Nation Under a Groove. "That kind of material the Supremes were singing, that voice was not necessarily best suited for that kind of material."

Eddie Holland says Gordy never told them what to write or which singers to use. Gordy eventually did change the name of the group to Diana Ross and the Supremes.

Ballard left the group in 1967. After that, Wilson says, Ballard's life went downhill. She tried for a solo career, but never made it. She went on welfare, and troubled by depression and alcoholism, she died at 32.

The music business is not for the faint of heart, and to make Motown as successful as it was, Berry Gordy Jr. could not have been a saint. In fact, many of the label's own artists had legal battles with the company at one time or another.

The Holland brothers spent years in litigation with Motown, and yet they want to set the record straight — that Berry Gordon Jr. was nothing like his counterpart in the movie, slick, conniving and controlling.

Another who finds fault with the film's version of the story is Motown pioneer Smokey Robinson, the singer and songwriter.

"I really am quite upset about it, because there's a lot of false information in there, and millions of people are seeing it every day," Robinson says.

"Nobody was paying us. So he borrowed $800 from his family's fund and started Motown, so that we could be paid," Robinson says. "And for him to be maligned and made out like this villainous character is very, very, very offensive to me."

Robinson says the stars of the film have tarnished their own history.

In the end, Dreamgirls is an entertainment film about entertainment. It could never be exactly right. And as Michael Bennett, who directed the original Broadway production, once said, if it were the story of the Supremes, he would have been sued. 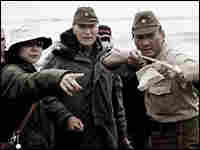 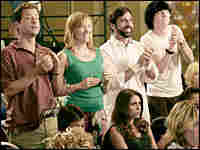 Pillaging pirates and tap-dancing penguins, Superman versus X-Men, Bond going up against Borat — it's been a big year for fantasy at the cineplex.

But it was when you walked past the auditoriums featuring the special-effects-driven epics, and on to the other theaters, that you would generally find something actually special: Helen Mirren's regal performance in The Queen, for instance, as a British monarch resisting her prime minister's call to react more publicly to the death of Lady Di.

And if The Queen has Mirren all but disappearing into her real-world character, Martin Scorcese's The Departed managed the opposite trick by having Jack Nicholson's fictional gangster be deliciously outsized, as he sneaked an informant onto the police force, while they sneaked one into his gang.

The Departed is bravura filmmaking, as was Clint Eastwood's double-whammy of a war epic — the very good Flags of Our Fathers and the really superb Letters from Iwo Jima (which Eastwood filmed almost entirely in Japanese). With notions of honor and duty foremost, this wartime double-feature offers a wrenching portrait of soldiers on both sides of one of the most ferocious battles of World War II. Let's call the two films a single choice, while noting that they are separately impressive.

Smaller in scope are a pair of tiny independent films. One's a riveting drama, Half Nelson, which seems a typical crusading-teacher movie — until you realize that the caring, protective middle-school teacher at its center is a crack addict. And the other is a road comedy called Little Miss Sunshine, about a family every bit as dysfunctional as the van it's traveling in, but one that makes an unusually stirring case for family values.

That's five. For the next three, let's look overseas — first to Europe, where Spanish director Pedro Almodovar's bright, bouncy comedy, Volver, put the melody back in melodrama — quite literally in a scene with star, Penelope Cruz, singing her heart out. "Volver" means "to return," and the film marks Almodovar's return to a favorite theme: women nurturing other women.

Harder to watch, but enormously involving, are two films about children: the Belgian picture L'Enfant, about a young thief who makes a terrifying error in judgment and then frantically tries to recover from it; and the Indian film Water, about a lively seven-year-old who becomes a widow after her family-arranged older husband dies. The problem is that widows in India are expected to live out the rest of their lives in mourning, renouncing the world — and this widow is awfully young for that.

The other two films on my list are by Mexican filmmakers who've been having mainstream Hollywood success. Horror director Guillermo Del Toro scored by mixing politics with his nightmares in Pan's Labyrinth — the tale of an 11-year-old girl who withdraws into a gorgeously visualized fantasy world to escape the horrors of fascism after the Spanish Civil War. Pan's Labyrinth is just opening in major cities, as is Children of Men, a breathtaking futuristic fable by Alfonzo Cuaron, in which we learn that women have stopped giving birth, and the youngest person on Earth — who's not all that young — has died. Children of Men imagines a world without a future, where Britain is the only spot on the planet where the rule of law still holds sway, and even it looks like a war zone. So naturally, it opened on Christmas Day.

Ten is an arbitrary number, and because I combined the two Eastwood films, we're already one over, so let's keep going. To winnow my list down, I had to leave out Babel, in which another Mexican director brilliantly communicates how impossible it is to communicate. I also skipped over the harrowing 9/11 drama United 93, and the Dixie Chicks documentary, Shut Up and Sing. And speaking of singing, there's that amazing number Jennifer Hudson sings in Dreamgirls, more or less reinventing the movie musical as she does. And the teenage detective flick Brick, finds indie Hollywood reinventing film noir as high-school noir.

Also great fun was a spoof of literary moviemaking called Tristram Shandy: A Cock and Bull Story. Brazil's mother-daughter drama, House of Sand, was austere and elegant. And an absurdist tragedy called The Death of Mr. Lazarescu felt like modern-day Kafka. Taken together, that makes 19 reasons for cheer as we start a new year in which Hollywood will no doubt shower us with fresh invention.

Why, in the month of May alone, there'll be Spiderman 3, Pirates of the Caribbean 3, and Shrek The Third.

Who says they don't make 'em like they used to?