Accessibility links
Mormon Leader Gordon B. Hinckley Dies at 97 The president and prophet of the Church of Jesus Christ of Latter-day Saints (LDS) has died after leading millions of Mormon faithful for nearly 13 years. Gordon B. Hinckley was 97. He had spent most of his adult life in the Mormon leadership. 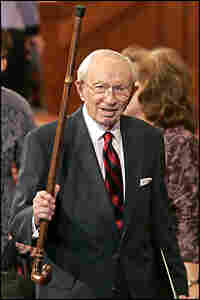 President of the Church of Jesus Christ of Latter-day Saints, Gordon B. Hinckley, gestures to the faithful with his cane as he leaves the first session of the 176th Semi-Annual General Conference in April 2006 in Salt Lake City, Utah. George Frey/Getty Images hide caption 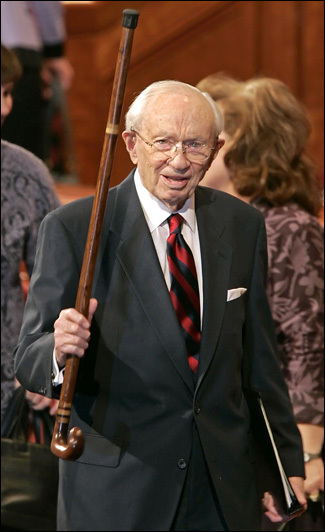 President of the Church of Jesus Christ of Latter-day Saints, Gordon B. Hinckley, gestures to the faithful with his cane as he leaves the first session of the 176th Semi-Annual General Conference in April 2006 in Salt Lake City, Utah. 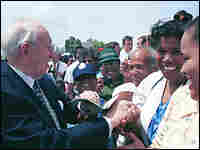 International expansion is one hallmark of the tenure of Mormon President Gordon B. Hinckley. Here he greets Mormon faithful on the Pacific island of Kiribati in 2000. The Church of Jesus Christ of Latter-day Saints hide caption

toggle caption
The Church of Jesus Christ of Latter-day Saints 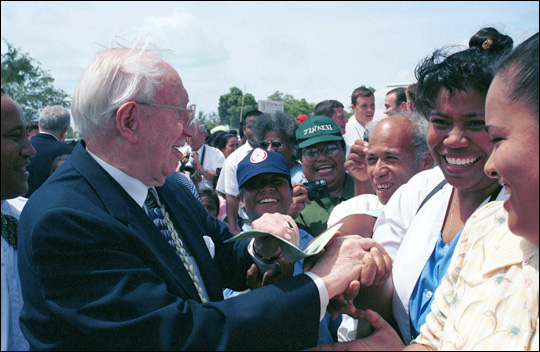 International expansion is one hallmark of the tenure of Mormon President Gordon B. Hinckley. Here he greets Mormon faithful on the Pacific island of Kiribati in 2000.

The Church of Jesus Christ of Latter-day Saints 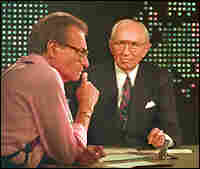 No Mormon president was as media savvy as Gordon B. Hinckley, who appeared on CNN's 'Larry King Live' more than once. He also charmed Mike Wallace during interviews for the CBS news program '60 Minutes.' Larry King Live hide caption 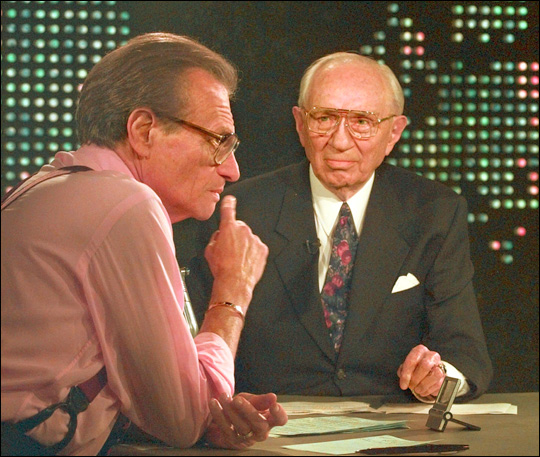 No Mormon president was as media savvy as Gordon B. Hinckley, who appeared on CNN's 'Larry King Live' more than once. He also charmed Mike Wallace during interviews for the CBS news program '60 Minutes.'

The president and prophet of the Church of Jesus Christ of Latter-day Saints (LDS) has died after nearly 13 years leading millions of Mormon faithful.

Gordon B. Hinckley was 97. He had spent most of his adult life in the Mormon leadership. Mormons believe he was a prophet of God who received divine inspiration as he engineered a vast expansion overseas. Non-Mormons saw him as the most visible Mormon leader in decades.

Hinckley was named to the highest ranks of Mormon leadership in 1961 and became "prophet, seer and revelator" in 1995. Mormons believe his ascension through the ranks was a process guided by God.

Born in 1910 in Salt Lake City, Hinckley was raised in a family with roots in religious exodus. One of his ancestors arrived in America with other Pilgrims aboard the Mayflower. Another became governor of the Plymouth Colony. Grandfather Ira Hinckley traveled from Illinois to Utah during one of the massive Mormon treks westward in 1852, losing a wife to cholera along the way.

A newspaper boy in his youth, Hinckley spent two years in Great Britain as a Mormon missionary. He wanted to become a journalist and planned to seek a graduate degree in journalism at Columbia University in New York. But his mission president asked him to stop in Salt Lake City first to deliver a message to Mormon leaders. The mission president wanted public relations materials to help with the missionary effort in Europe.

The Mormon officials at Church headquarters were so impressed with Hinckley's pitch, they hired the young man to develop the faith's first public relations department. Hinckley never enrolled at Columbia but he spent 20 years developing a public face and message for his Church. He then worked eight years as the manager of the Mormon global missionary program.

As Mormon President, Hinckley welcomed media attention and appeared in major newspapers and magazines, and on the CBS News program 60 Minutes and the CNN program Larry King Live. He worked hard to challenge a lingering image of the LDS faith as a non-Christian cult. Hinckley depicted Mormons as Christ-centered and mainstream.

Hinckley's courting of news media began on his second day as Mormon president. At a rare news conference, he joked with reporters and tackled tough questions. The event contrasted sharply with the "news conference" of a predecessor, who merely read a statement and left. Questions were not permitted.

Hinckley agreed to two interviews with Mike Wallace, the television-news tough guy at 60 Minutes, and they turned Wallace into a gushing fan.

It was Hinckley's "candor," Wallace told NPR, "his willingness to entertain any question, no matter how difficult or, perhaps embarrassing," that charmed Wallace.

"He was just absolutely open with me," Wallace said. "It became quite clear that there was a great deal in the Mormon religion that I genuinely admired."

Wallace and other interviewers asked Hinckley about controversial aspects of the Mormon faith, including its patriarchal nature, its roots in polygamy (now rejected by Mormons), its excommunications of dissidents, its involvement in political issues, its past denial of full membership for black males (reversed in 1978) and its novel doctrines, which offend some Christian groups.

Mormon prophets have the power to change doctrine overnight. The faithful believe God guides the sitting prophet through revelation. Hinckley didn't change doctrine during his tenure. But he did change the way Mormons and their faith were presented to the world.

One major initiative involved the name of the faith. Most Americans know it as "The Mormon Church." Hinckley launched an effort to stamp out that phrase. He asked news media to use the formal name, "The Church of Jesus Christ of Latter-day Saints." And, in case anyone missed the point, he changed the official Mormon logo so that the name "Jesus Christ" appeared in oversized letters.

Hinckley was trying "to change the image of the Church from being on the margins," said Jan Shipps, an emeritus professor of history and religious studies at Indiana University-Purdue University at Indianapolis. Shipps is not Mormon but has studied the Mormon faith for 40 years. Hinckley wanted to transform the image, she added, "from being 'weird' to 'not being weird,' in his language. In my language, it's moving from the margins to the mainstream."

Mormons used to pride themselves as a "peculiar" people. But being perceived as mainstream became increasingly important during Hinckley's tenure, with the Church appearing more often in the public eye:

International growth is another Hinckley hallmark, said Kathleen Flake, a Mormon and an associate professor of American religious history at Vanderbilt University. "Making that international church feel and, in fact, be an integrated part of what has been an American church, in Nigeria, in Brazil, in Japan," is a Hinckley accomplishment, Flake said. "[He made] sure that the full component of the Church's program is available in those areas."

Hinckley built thousands of Mormon chapels and dozens of sacred Mormon Temples around the globe. He launched the Perpetual Education Fund, which provides scholarship loans to poor converts and Church members overseas. He wanted to develop strong local leadership as missionaries found converts in poor countries and neighborhoods.

Hinckley took pride in his extensive travel to the faithful, despite his advanced age. He was the missionary-in-chief, visiting members and heads-of-state.

"I have lifted my voice on every continent, in cities large and small, from north to south and east to west across this broad globe," he told a semiannual gathering of Mormons in 2006. "It is all a miracle."

Hinckley also sought to bolster the faith of existing Mormons. The Church bought and renovated Mormon historic sites and encouraged pilgrimages. Hinckley also challenged members to re-read the Book of Mormon, to reconnect with a fundamental text of their faith.

When Gordon B. Hinckley became Mormon president in 1995, nine million people called themselves Mormons. Most of them lived in the United States, where the faith was founded. At his death, the membership rolls counted more than 12 million Mormons in 160 countries. The majority now live outside the U.S.

Tradition dictates a presidential succession procedure that lasts about a week. After memorial services for Hinckley, the Mormon leadership will meet and pray. Tradition also indicates that Hinckley's "counselor" in the leadership, his second-in-command, will become the new Mormon President. That is 80-year-old Thomas Monson, who also spent most of his adult life assisting in the management of the Church. Monson is considered a moderate and was heavily involved in the international expansion effort.

Notable Quotes from Gordon B. Hinckley

Quotes from Gordon B. Hinckley, president and prophet of the Church of Jesus Christ of Latter-day Saints.

His message to women in his patriarchal faith:

"Do the best you can. And remember that the greatest asset you have in this world is those children who you've brought into the world, and for whose nurture and care you're responsible."
--News conference in Salt Lake City, March 13, 1995

"People wonder what we do for our women. I'll tell you what we do. We get out of their way and look with wonder at what they're accomplishing."
--National Press Club appearance, March 8, 2000

On Church involvement in political issues:

"We urge our people to exercise their franchise as citizens of this nation, but we do not tell them how to vote and we do not tell the government how it should be run."
--On CBS News' 60 Minutes, April 7, 1996

"The church as an institution does not involve itself in politics, nor does it permit the use of its buildings or facilities for political purposes. Now, we do become involved if there is a moral issue or something that comes to the legislative calendar which directly affects the church."
--National Press Club appearance, March 8 2000

On the insistence of some evangelicals that Mormons are not Christians:

On the lingering practice by "Mormon fundamentalists" of polygamy:

The Church of Jesus Christ of Latter-day Saints