Accessibility links
To Cut Trans Fats, You Need a Better Soybean Across the country, restaurants are under pressure to get rid of trans fats. But finding a healthier cooking oil that also holds up to extended use won't be easy. The search begins in the soybean fields of the Midwest.

Listen
To Cut Trans Fats, You Need a Better Soybean

In fact, the signature taste of McDonald's fries came about as something of an accident. Read more. 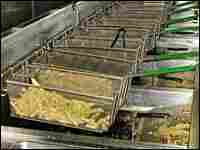 For the last two years, "low-lin" soybean oil has been used in the deep fryers of the dining halls at Iowa State University. The school has found that trans-fat-free oil lasts twice as long as old-fashioned hydrogenated oil. Scott Horsley, NPR hide caption 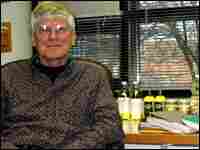 Across the country, restaurants are under pressure to get rid of trans fats, which are made when hydrogen is added to vegetable oil; a July deadline looming in New York City. But it won't be easy to find a healthier cooking oil that can be produced at the scale needed to supply national chains and also hold up to extended use. The search begins in the soybean fields of the Midwest.

Nearly 80 percent of all the oil used for cooking and baking in this country comes from soybeans. But in their natural state, soybeans have a problem: a high concentration of linolenic acid, which makes their oil spoil quickly.

"It just doesn't have the shelf life that you would like to have in products," says Walter Fehr, a professor of agriculture at Iowa State University who has devoted most of his career to breeding soybeans for tofu, soy milk and especially oil. "And that's the reason that they switched many years ago to hydrogenation."

Stays Good Longer... But Not So Good for You

Hydrogenation extends shelf life. In the last century, the original Crisco and other partially hydrogenated oils became popular because they offered a lot of advantages. They make fried food crispy. They can be used over and over again. And they're inexpensive. But partial hydrogenation also creates trans fats, which are now known to increase levels of bad cholesterol. That's why Fehr has been busy breeding a soybean that doesn't need hydrogenation to stay fresh.

After decades of conventional breeding, Fehr developed a line of soybeans that have just 1 percent linolenic acid. But breeding these "low-lin" soybeans was only half the battle. Fehr also had to find farmers willing to grow the soybeans and processors willing to squeeze the oil out of them. Finally, he had to prove to restaurants that low-lin soybean oil would work in a large-scale, commercial environment.

"We noticed that we didn't have to change the oil every week," Bierman says. "We started to test how far we could hold the oil, and it ended up being about two weeks."

It's Healthier... But Does It Pass the Taste Test?

Another key consideration for restaurants is the texture and taste of food once it has been fried in oil. KFC rejected a trans-fat-free canola oil because it hid the flavor of the chicken's 11 herbs and spices. McDonald's says it backed away from a trans-fat-free oil in 2002 because the French fries didn't taste quite right.

That's why food-processing giant Archer Daniels Midland employs a full-time "sensory panel" to test ingredients such as cooking oil before they go to market.

Matlock says ADM has been working on its own line of trans-fat-free oils for both restaurants and packaged-food companies. A test tube bubbling away in the company's laboratory bears the name of the doughnut chain Krispy Kreme. Matlock says it's just as well that food makers have not switched away from trans-fat-filled oils in one fell swoop. Given the amount of oil used throughout the country, he says, the industry needs time to adjust.

"If everybody banned trans all at once, it would create some shortages, potentially, of the naturally stable oils," he says.

One of the biggest challenges for a company of McDonald's size is ensuring an adequate supply of oil. At the moment, there aren't enough low-lin soybeans to go around. If all the restaurants in the country were to make the switch, they would need about 12.5 million acres of soybeans — an area the size of Massachusetts and New Jersey combined. Last year, less than a million acres of the special soybeans were planted. The acreage is expanding, but raising the soybeans — and keeping them separate from ordinary beans — takes extra effort. And professor Fehr says that not every farmer is willing to do that.

"The farmer is going to be the one who decides whether or not this is going to work in soybeans, pure and simple," Fehr says. "And the challenge right now for the 2007 crop is whether enough farmers are going to be willing to grow these beans."

Farmers do receive a premium for growing low-lin soybeans. But this year, they might make even more money growing plain old corn, thanks to the growing demand for the gasoline additive ethanol. That presents a dilemma for growers like Dan Allen, who farms a few thousand acres in Iowa's Madison County.

"I don't think we've figured out what we're going to grow," Allen says. "With the profitability of corn increasing, they're going to have to pay some real dollars in order to buy the beans to fill their contracts."

The young low-lin soybean industry will only succeed if the price is low enough for restaurants — and high enough for farmers. Allen says when planting time comes in April, he'll grow whichever crop makes the most money. But he's crossing his fingers that the low-lin soybeans catch on. 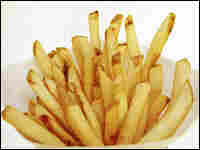 The signature taste of fast-food fries came about as something of an accident. Stephen Walls hide caption

In fact, the signature taste of McDonald's fries came about as something of an accident.

By the 1950s, most other restaurants were using pure vegetable oil, partially hydrogenated to extend its shelf life. But the tiny shortening company that originally supplied McDonald's — Interstate Foods — was too small to afford hydrogenation equipment. So Interstate founder Harry Smargon turned to a centuries-old alternative: a blend of oil and beef fat.

As John F. Love wrote in his history, McDonald's: Behind the Arches, that beef-fat flavor would become the standard, not only for McDonald's but the rest of the growing fast-food industry.

"For reasons even he finds hard to explain, Smargon insisted that Interstate's shortening blend produced a crisper and more flavorful French fry than one cooked in all-vegetable shortening," Love says.

McDonald's founder Ray Kroc agreed. And that beef-fat blend dominated until the late 1980s, when fast-food companies were finally forced to switch to pure vegetable oil, out of concern that the saturated fat in beef tallow raises cholesterol. Even as they made the change, most restaurants tried to preserve the familiar beef-fat flavor of their French fries.

McDonald's, for one, continued to use essence of beef in its fries to retain some of the original flavor, though it failed to disclose it — prompting a lawsuit from vegetarians and Hindus, who consider cows sacred and don't eat beef.

But in switching to vegetable oil, fast-food chains also adopted the chemical process of adding hydrogen to the oil to extend its fry life. It's now known that the trans fats created by this partial hydrogenation are as bad for you, and possibly worse, than the saturated fats they replaced. Trans fats not only raise bad cholesterol levels, which increase the risk of coronary heart disease, but lower good cholesterol levels as well. As a result, McDonald's and other fast-food companies are under pressure to switch again.

In the meantime, some say a new generation of customers has grown accustomed to the taste of potatoes fried in partially hydrogenated oil.

"Right now, we get requests for a flavor profile, and we realize it's the minor components of hydrogenation that are imparting the flavor," says Research Vice President Mark Matlock of Archer Daniels Midland. "So they really want 'hydro flavor' in their product."

Still, lessons from another fast-food staple offer hope for a healthy and tasty outcome. When KFC decided to eliminate trans fats, the company stuck with a soybean oil similar to what it had been using, but with one major change: It's not made from partially hydrogenated oil, the source of trans fats.

Gregg Dedrick, president of KFC, said their fried chicken's "flavor profile" was unchanged. KFC carried out in-store testing and let customers taste chicken cooked in both the previous oil and the new, healthier oil. The result? They couldn't taste any difference, Dedrick says.