Accessibility links
'Spring Awakening' Brings Teen Angst to Broadway Spring Awakening is winning critical praise as a fresh interpretation of the Broadway musical. Based on a 19th-century play, the angst-ridden teen musical defies convention by dealing with tough topics and raw adolescent feelings. 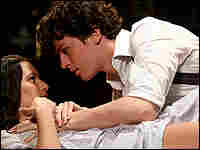 At the end of act one Wendla (Lea Michele) and Melchior (Jonathan Groff) discover new feelings for each other. Joan Marcus hide caption 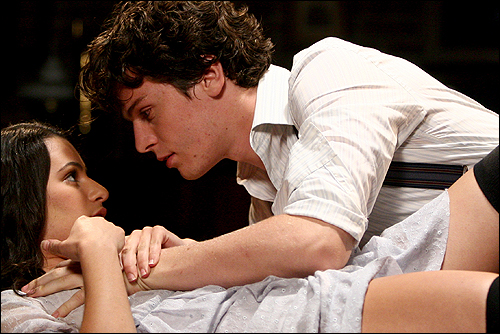 At the end of act one Wendla (Lea Michele) and Melchior (Jonathan Groff) discover new feelings for each other.

Music from the Show

Listen to three songs from the indie-rock musical.

"The Word Of Your Body" 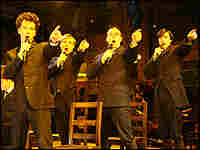 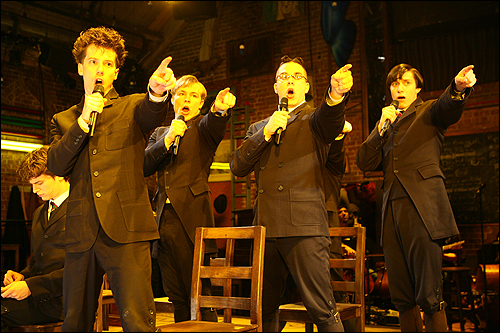 Moritz, Melchior's troubled friend, leads his schoolmates in an expression of discontent with their school's repressive practices.

Critics are hailing the new show Spring Awakening for reinventing the Broadway musical. Based on a 19th-century German play that was controversial for decades, Spring Awakening deals with teenage sexuality and includes incest, sadomasochism and rape.

Strikes a Chord with Teens

The musical is set in 1891, but the songs themselves are indie-rock modern in sound — and timeless in content. In one scene, German school boys in drab uniforms and brutally parted hair conjugate Latin verbs. Suddenly, one boy leaps up, pulls a microphone from his jacket and sings. The idea is that we're hearing teenagers' inner thoughts –- and those haven't changed much over generations.

"The songs connect our time to their time. But issues don't really change; they just get swept under the rug," says 15-year-old Zuri Washington, who has seen the musical three times.

While Spring Awakening is as much rock concert as musical, the actors speak in formal, 19th-century dialogue when they're not singing. The actors are kids, most of them between 15 and 20 years old. So when they sing about growing up, it feels dangerously immediate. And when they aren't performing, they are treated like rock stars by the fans who mob the stage door after every show.

The music is by Duncan Sheik, who had a few songs on the rock charts in the mid-'90s ("Barely Breathing" was his biggest success.) His musical theater background was limited to a handful of shows in high school. Sheik says most rock musicals are just dressed up in leather pants. He defied convention by writing indie rock songs for Awakening and trusting them to flow organically into the story. Most critics say he has succeeded.

"It's doing something entirely new. it's really trying to push the genre forward. I actually hope it will inspire other musicians from the pop and rock worlds to experiment with writing for theater," says Charles Isherwood, who reviews theater for The New York Times.

Playwright Steven Sater, who wrote the lyrics and book, met Sheik in Buddhist circles eight years ago. Sheik says it really does makes sense for two Buddhists to write an angst-ridden teen musical about the fatal consequences of repression.

"Buddhism is about life in all its complexity and intensity," Sheik says. "I think for us, as Buddhists, it's acknowledging what the human condition is."

But the two had difficulty getting the musical staged. After the Sept. 11 attacks, Sater says, producers believed that audiences wanted frothy, escapist fare: "With our German story and our rock CD, people just couldn't make it out."

Then Tom Hulce, the star of the movie Amadeus, signed on as one of Spring Awakening's executive producers. What attracted him to the play, he says, was the source material's voluptuous stew of adolescent feelings: "Shame and self-worth, and what it means to love someone, and what it means to lose someone, and the thrill and almost outlaw sense of getting to partake of something that is forbidden. And then the responsibilities of that."

Hulce says the play belongs in an era where prurience and sex are still deeply intertwined, and where bad kids, sad kids and kids who don't quite belong still have precious little to guide them.