Accessibility links
An Asian Pygmy and his Pal from Far Rockaway : Krulwich Wonders... Alan Rabinowitz, a scientist from New York, felt compelled to walk 600 miles into the Himalayas to visit one of the last surviving Asian pygmies and show him a picture of Rabinowitz's baby son.

Listen
An Asian Pygmy and his Pal from Far Rockaway 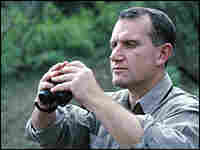 Dr. Alan Rabinowitz was born in New York City, grew up in Queens, in Far Rockaway, and for a while was the "Knife Man" in a neighborhood gang. Back in the early 1960s, Knife Men led the charge in street fights, maybe stabbed their rivals to draw blood and certainly tried to make them run away. But they didn't want to kill or seriously wound anyone. They just wanted to claim a territory and scare the other guys off. That's what Alan did, for a while.

Then he finished high school, went to college, then grad school in ecological science and for the last three decades, he's spent his time working for the Wildlife Conservation Society in Taiwan, Thailand, Laos, Belize and Myanmar (Burma), where he tries to protect jaguars, clouded leopards, tigers, Sumatran rhinos and all sorts of large mammals from encroaching humans. He even found an animal — the leaf deer-- previously unknown to science.

So, he's gone from the streets to the forest and he's recorded his adventures in several books: Jaguar, Chasing the Dragon's Tail, and more recently, Beyond the Last Village.

The last title describes a visit Rabinowitz made to the Burmese/ China border back in 1997, where he met a man about his age, an Asian pygmy named Dawi.

It wasn't an accidental meeting.

Alan, like the rest of us, knew of pygmies in Africa. But one day in a Burmese bookstore, he happened upon a book about a pygmy tribe called the Taron. They'd been described by some British anthropologists in the 1950s: 150 families of small-statured Asians who lived together in a remote village in an almost inaccessible Himalayan valley.

Alan looked up the village on a Burmese map and decided he wanted to find out what happened to those families. And so, on his way up to the Chinese border, he decided to make a short detour and visit the village. When he got there, he discovered that instead of 150 families, there were only a handful of Taron left. The others, all the others, had disappeared.

Where had they gone?

There was one man, a pygmy hunter named Dawi, who could tell him the answer. Alan found Dawi (or maybe Dawi found Alan) in the forest. The two became, in their way, friends, and as you will hear when you listen to our story, Dawi told Alan the terrible secret that explained why there were so few Taron. And then Alan told Dawi a secret of his own, a secret that once told, changed Alan's life.