Accessibility links
Microsoft Opens Up 'Vista' Operating System Microsoft is about to unveil its first new operating system in a number of years, amid much fanfare. But a big question remains: Is Vista any good? 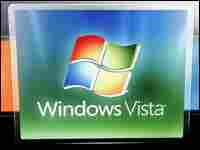 Microsoft is about to unveil its first new operating system in a number of years, amid much fanfare. But a big question remains: Is Vista any good?

Early reviews say the software, which will be available to consumers on Tuesday, delivers some real improvements — especially in the area of security. But it's not likely to cause a stampede at your neighborhood computer store.

Bill Gates is scheduled to appear Monday night on The Daily Show with Jon Stewart. And some retailers are holding midnight sales events. But unless those retailers are offering deep discounts, analyst Rob Enderle says, there's no need to stay up that late, just to be first on your block with the new software.

"Don't get me wrong," he says. "I've been using it myself for awhile. It's a good product, but I value my sleep a lot."

Enderle says the graphics of the new operating system are much prettier than older versions. It no longer looks like something from the last decade, he says. What's more, Microsoft has worked hard to make the software less vulnerable to computer hackers.

Enderle says people who are already planning to buy a new PC should be happy with the new operating system that comes with it. But those with older computers might think twice about buying Vista as an upgrade.

"If you bought a PC in the last year, it'll work fine. I'd just be real sure you that have enough memory. Vista really likes memory."

The most basic version of Vista retails for about $200, with advanced versions selling for twice as much. Technically challenged customers can pay an additional fee to have the software installed by a professional.

What are the advantages and drawbacks of Microsoft's Vista operating system? Early reviews say the software delivers some real improvements, especially in the area of security. New York Times technology columnist David Pogue offers his insights.

For the average person, is it worth or even possible to upgrade?

That's the key question. It probably isn't possible. I'd say a year- or year-and-half-old computer is really the only one that can accommodate Windows Vista with all its features. So Microsoft says 95 percent of the world will get Windows Vista aboard a new computer.

All well and good if you can afford to switch out. In a way, isn't that a drawback?

Exactly, "Windows Vista, $2,000 with free computer." It's a drawback only if you consider Windows Vista to be a new thing that you've got to have. In other words, I think most of the world just uses the version of Windows they get when they get a computer. And a lot of people have been waiting for over a year, just for this reason. They heard that they would need a new computer to run this thing, and so they'll just get it when they get it.

Why bother with the advertising if effectively most consumers will get Vista on the computer that they buy, when they buy that new computer?

That's an excellent question and I think it has less to do with individuals going to the computer store and buying the upgrade and more to do with No. 1, PR, and No. 2, the corporations who buy 500 copies at a time. These are Microsoft's main interests. These are the bread and butter.

So, what's your favorite feature?

Wow, there's a lot of cool stuff. I have to say the speech feature, speech recognition. Basically, you wear a headset microphone. You can dictate text, exactly as I'm talking to you, comma, and everything gets written down, period. And can control everything too. You can even move the cursor and drag the mouse, all by voice.

And my second favorite feature, I just have to mention this, it's so great: On laptops, there is now a one-click button, called presentation mode, and that's for when you're in a boardroom some where, giving a PowerPoint pitch. It turns off everything that might interrupt your talk: screen savers, error messages, funny beeps. It'll even change your desktop picture so that the bikini babe you usually have isn't visible to the rest of the board, as you give your pitch. It's just clever.