Accessibility links
Hiding the Implicit Timetable in Iraq In recent interviews, President Bush and Vice President Cheney have taken different approaches to selling their troop buildup in Iraq. You could call it a variation on the old hard-cop, soft-cop routine. But both are also careful to state the U.S. commitment in terms of a wider, regional and ideological struggle — rather than in terms of Iraq itself.

Hiding the Implicit Timetable in Iraq

Hiding the Implicit Timetable in Iraq 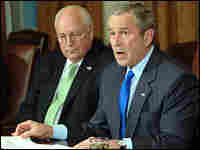 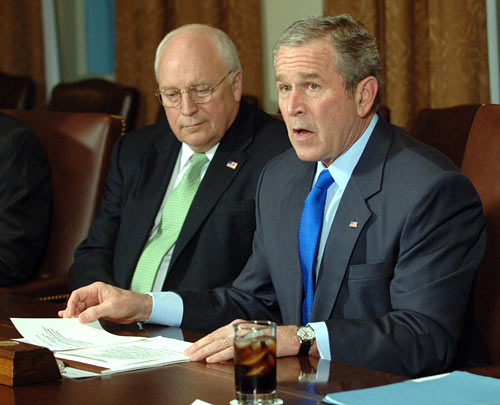 President Bush speaks to reporters as Vice President Dick Cheney listens during a meeting with military leaders at the White House, Jan. 24, 2007.

Hear the Interview with President Bush, Read a Transcript Jan. 29, 2007

In recent interviews, President Bush and Vice President Cheney have taken different approaches to selling their troop buildup in Iraq. You could call it a variation on the old hard-cop, soft-cop routine.

President Bush in public is all about respecting his critics, calling them "decent people." His State of the Union address and other recent statements are studded with accommodating words for those who doubt his policy. He then makes his own point, of course, with ominous rhetorical questions about "what happens if we fail."

The vice president, by contrast, barrels ahead with talk about our successes in Iraq, telling naysayers in Congress and elsewhere to take a hike. If the Senate passes a resolution doubting the buildup, they're validating the strategy of the Bad Guys. That sounds pretty close to aiding and abetting the enemy, a good working definition of treason.

But on the larger strategic points of purpose and planning, the two cops seem to agree: The United States is in Iraq and the region for the long haul. Here's President Bush talking to NPR Senior Correspondent Juan Williams at the White House this week: "This war on terror is going to take a while, and Iraq is just a part of it.... presidents and Congresses will be dealing with this ideological struggle for quite a while."

Much the same note was struck by Vice President Cheney in his interview with Newsweek's Richard Wolffe published a day earlier:

"The conflict we're involved in, not just Iraq but on the broader basis against al-Qaida... is going to go on for a long time.... It's a problem that I think will occupy our successors maybe for two or three or four administrations to come."

It's easy to read into this a promise to maintain high levels of U.S. troops in Iraq for years to come. Surely that's the message Sen. Hillary Clinton (D-NY) heard before going off to campaign for president last weekend. In Iowa, Clinton said it would be "the height of irresponsibility" for President Bush to leave his successor with the problem of U.S. troops in Iraq. No doubt any prospective successor would agree.

But on closer inspection, neither the president nor his vice president is really promising to leave troops on station in Iraq indefinitely. Instead, they are attempting to justify their short-to-middle-term escalation of the war there by placing it in the context of a longer struggle against al-Qaida and all forms of extremism. And it is this longer, grander struggle that they warn us will take some time.

This strategic timeframe, consistent back to the administration's earliest statements after the terror attacks of Sept. 11, 2001, does not necessarily require an open-ended military mission in Iraq. In fact, the full picture of administration statements on Iraq this month hints at something quite different: a prelude to disengagement.

On the same day the president delivered his State of the Union address, his newly named commander in Iraq, Lt. Gen. David Petraeus, told the Senate Armed Services Committee he expected to see results on the new Iraq policy in a matter of months — possibly by summer. Otherwise, he implied, the policy would need to change.

And on Jan. 10, the new secretary of defense, Robert Gates, told a news conference at the White House that the Iraqi government of Prime Minister Nouri al-Maliki would have to show real commitment to cracking down on sectarian militias – and do so even sooner than Petraeus asked.

Gates said he could imagine Iraq passing or failing the test by spring – even before all five of the new U.S. brigades were in place in Baghdad. It was easy to imagine a scenario under which some of those troops would not even be deployed.

"I think we're going to know fairly early in this process whether the Iraqis are in fact prepared to fulfill the commitments that they've made to us," Gates said that morning.

So what if the necessary benchmarks are not met? There is a growing consensus among Republicans, not to mention Democrats, that another failure like last summer's Operation Forward Together will tear the fabric of trust between the Bush and al-Maliki command centers. And at that point, as both Gates and Petraeus implied, it will be time for something completely different.

No one wants to say it, but that something will almost certainly be a phased withdrawal. There will be no reservoir of support for staying the course or for escalating the war still further.

That may well be why both President Bush and Vice President Cheney are so careful these days to state the U.S. commitment in terms of a wider, regional and ideological struggle – rather than in terms of Iraq itself.

In theory at least, the administration can stay committed to these grander causes even if it's forced to abandon the immediate battlefield in Baghdad and look for another time and place to resume the wider war.

That is why saying "benchmarks," a term rich with sturdy implications of achievement and self-reliance, is so preferable to saying "timetable."