Accessibility links
Saving the World in Ethiopia: One Child at a Time Independent producer Jake Warga visits a friend who is doing health-relief work in Ethiopia. The woman makes sacrifices and finds herself in odd situations. To Warga, she is a real –- flawed — hero.

Listen
Saving the World in Ethiopia: One Child at a Time 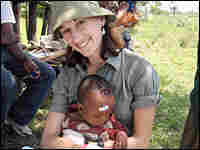 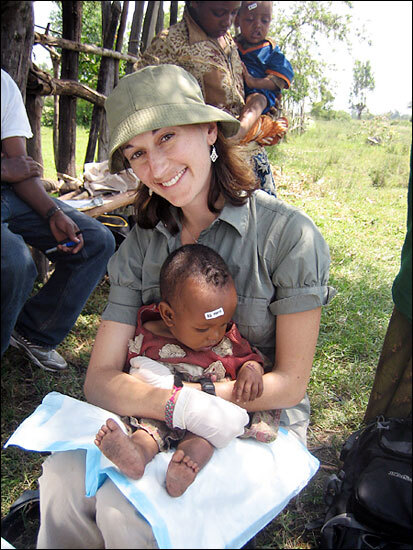 Jenafir at work in Ethiopia.

Independent producer Jake Warga visits the person he admires the most, his best friend Jenafir. She is doing medical research in Ethiopia. He details the sacrifices she must make and the odd situations she finds herself in while leading a team of ophthalmology students. They are working ceaselessly to treat trachoma, an eye disease eliminated long ago in the developed world. To Warga, she is a real hero. 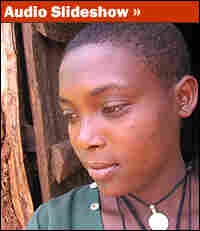 Watch a Narrated Slideshow About Child Brides in Ethiopia. 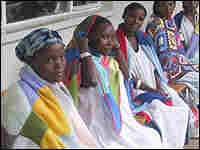 Young girls sit on the veranda at the Addis Ababa Fistula Hospital in Ethiopia, wrapped in shawls that are given to them when they are admitted. Brenda Wilson, NPR hide caption 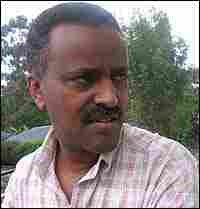 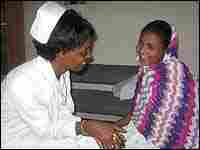 Nurse Bethlehem Tesfaye talks with Fantan Dere. Fantan thinks she is 10 years old, but isn't sure. The hospital says it's more likely she's 12. Fantan has been married for four years, and recently lost a baby due to delivery complications. Brenda Wilson, NPR hide caption 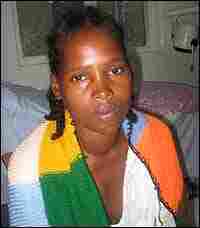 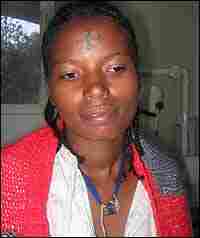 Complications during delivery are a leading cause of death for women giving birth in developing countries. In remote areas, women sometimes languish in labor for days. Those who survive the ordeal often endure a lifetime of agony from severe internal injuries.

In Ethiopia, the Addis Ababa Fistula Hospital offers a rare chance at treatment and respite for some women.

One of the patients, Fantan Dere, is a young girl unsure of her age. She tells nurse Bethlehem Tesfaye that she may be 10, but the nurse thinks it's more likely Fantan is 12.

Fantan says she has been married for four years; marriages happen at a very early age for girls in rural Ethiopia. But they usually aren't consummated until the girl is ready to conceive. Fantan didn't live with her husband until two years ago. In July, she went into labor with her first child. She was in labor for three days before she was taken to a hospital in Dessie. By then, the baby had died and Fantan was severely injured.

There are few health workers or skilled specialists beyond a local midwife to assist rural women during childbirth. More often, other women in the neighborhood are their helpers. That was all that was available to 18-year-old Haddassa Abraham.

"When I was in labor, they were pushing my abdomen and I was suffering a lot," Haddassa says. "I was yelling very much. They were holding me and I was screaming."

An Injury that Brings Shame

The injuries Haddassa suffered were the beginning of a humiliating condition she has endured for the past year.

"After I got home, and I started to leak stools and urine. Then I got very sad," she says. "I started to wash myself, to cover it with some piece of clothes."

Haddassa has an extreme case of fistula, a condition that occurs when tissue walls within the pelvis are torn. Usually, just the bladder is involved. But nothing stops the leaking. In absence of professional treatment, women with a fistula sometimes will insert stones and rags in the vagina to try to stop the leaking. They are afflicted with horrible infections and a constant odor. These women are often abandoned by their husbands and families and become outcasts in their community. Haddassa's family brought her to the Addis Ababa Fistula Hospital.

"I see these girls, and it breaks my heart," says Ruth Kennedy, a 54-year-old midwife at the hospital.

Kennedy explains that obstruction in labor often occurs because the mother's pelvis is too small for the baby's head, or the baby is in the wrong position as it emerges from the womb.

Difficult labors can cause fistulas by tearing the tissue walls between the vagina and the bladder, and in some instances, the rectum.

In Kennedy's 23 years in Africa, she has come to understand firsthand just how poverty contributes to this tragedy.

"This consumes enormous calories for this small child, and her consumption of calories is not enough," she says. "The little girl loses stature. Her bony pelvis is small."

Kennedy works for New Zealander Dr. Catherine Hamlin, who, in 1971 with her late husband, founded the 140-bed Addis Ababa Fistula Hospital. It is supported by a nonprofit foundation.

The hospital, supported by a nonprofit foundation, is a series of low-lying buildings shaded by trees. It's a hushed place with wards of gleaming, white walls and floors that reflect the light streaming through the windows. Rows and rows of small women lie in the beds.

"They come here, we put them in a bed with white sheets and blankets," Kennedy says. "They've been sleeping on a goatskin in their village, but that doesn't mean that's how we treat them in our hospital. We have them in beds. We give them a nightdress. We give them a shawl."

In some instances, medicine, proper nourishment and exercises to strengthen the bladder and pelvic muscles will heal the fistula.

In most cases, however, surgery will be necessary to repair it. The surgery is a fairly straightforward procedure that involves separating the bladder from the vagina and closing the hole. Chief surgeon Biruk Tafesse left his position at the University of Addis Ababa to work at the hospital.

"When I was a resident, I'd see these patients and the suffering, and I decided that I have to help these patients," Tafesse says.

The typical patient is between the age of 15 and 20. Some patients are younger, and some patients are older women who've lived with the fistulas for years. That, he says, can disable them because they've kept to their beds or crouched in corners.

"They're trying to prevent this leakage, and they're hiding at the same time also," Tafesse says.

So muscles become rigid, and the women have difficulty walking. Tafesse shows us a room at the hospital devoted entirely to physical therapy. There are women on exercise machines and a girl lying on her stomach as a therapist helps her to flex her knees.

For some, the problems are more than physical, and the hospital recently hired a psychiatric nurse.

"After passing through all these problems, they develop psychiatric problems," Tafesse says, including depression and suicidal acts.

The hospital places a lot of emphasis on attending to the psychological impact of enduring such pain and isolation, but even with treatment, psychological and physical problems can persist.

Some women will have to wear an external bag to collect urine or feces for the rest of their lives, but that kind of medical care is complicated to deal with in a rural village. So Tafesse says they've created a village, called Desta Mender or Joy Village, for these women just outside of Addis.

"We try to recreate the rural atmosphere," he says. "They can grow some vegetables. There are chickens and cows. And there are also some fruit trees and so on."

Most women who have had obstetric fistulas will never be able to have children and, in many instances, cannot have sexual intercourse. Such women are considered useless — a notion that isn't that disturbing to young Measlee Shagru, who didn't want to get married in the first place. As a cloud burst breaks the quiet outside the hospital, Shagru looks forward to returning home and a new life.

Obstetric fistulas need never happen. And they seldom do in the United States and other western countries. When there are complications during delivery, there is usually a hospital or a doctor nearby who can perform a caesarean. Like most poor countries, Ethiopia suffers from brain drain. There are now more Ethiopian doctors in the city of Washington, D.C., than in all of Ethiopia — a country of more than 70 million people.