Accessibility links
Yuma's Lettuce Fields Remain Free of E. Coli America gets much of its winter lettuce from the fields of Yuma, Ariz. But unlike the country's other big lettuce region — California's Salinas Valley — Yuma's crops haven't been hit with E. coli contamination. Produce companies are learning new lessons about avoiding future outbreaks.

America gets much of its winter lettuce from the fields of Yuma, Ariz. But unlike the country's other big lettuce region — California's Salinas Valley — Yuma's crops haven't been hit with E. coli contamination. Produce companies are learning new lessons about avoiding future outbreaks. 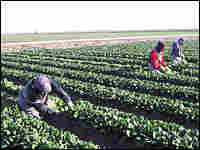 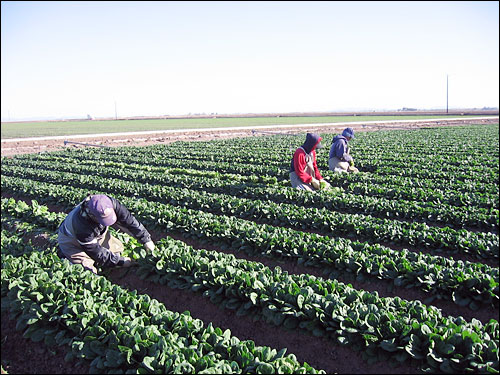 Moving on to last year's E. coli outbreaks, which killed three people and made hundreds sick around the country. That crisis had a huge impact on California's lettuce and spinach growers. And across the border in Arizona, growers have been making changes, even though produce from fields there have not been linked to any outbreaks.

CARRIE KAHN: For eight months of the year, Salinas, California, brags that it's the salad bowl of America, but from November to March the celebration moves to Yuma, Arizona, which produces 90 percent of the country's winter lettuce.

KAHN: At Yuma's annual lettuce fair, square dancers entertain on the Parsley Stage off Maine Street. A cold wind puts a damper on some of the fairs usual festivities, like lettuce bowling in the world's longest salad bar. But the produce business here is hot.

Mr. KURT NOLTE (University of Arizona): Well, I really think the environment is in our favor.

KAHN: Kurt Nolte is an ag specialist with the University of Arizona.

Mr. NOLTE: The temperatures are cool here, relative humidity is rather low.

KAHN: Irrigation water comes out of the chilly Colorado River, and unlike much of California, there's virtually no livestock near Yuma's fields. E. coli is often found in cow manure.

Mr. NOLTE: So we have a lot of factors here that kind of play into the growers' favor.

KAHN: Factors that make Yuma a great place to grow crops and a not so great place for E. coli. The deadly strain of the bacteria thrives where it's hot and humid. Yuma may be the desert, but in the winter months, it's cold and dry. Still, Yuma's lettuce producers aren't relying solely on geography to keep their operations E. coli free.

Mr. GREG KUMAR(ph) (Natural Selection): When you walk into this facility there is a hand dip and a foot dip that you need to use upon entry. So it's on our left here.

Mr. KUMAR: The product goes into this (unintelligible) system and then it goes under these rolling wheels.

KAHN: Baby lettuce leaves drop off a conveyor belt into huge vats of bubbling chlorinated water. A large rolling metal drum keeps the leaves submerged in the treated water. The produce is then dried and bagged and Kumar says it's tested once again for E. coli before leaving the plant.

All that washing and testing is part of new efforts to salvage the three billion dollar a year bagged produce business. The industry is rebounding after last year's outbreaks, but some experts question whether these ready-to-eat bags of leafy greens may be leading to increased outbreaks, especially when one head of tainted lettuce chopped up and put in multiple bags could turn an isolated contamination into a widespread event.

Jack Guzewich(ph) with the FDA Center for Food Safety says while the risk of illness is small, processor have to be careful.

Mr. JACK GUZEWICH (FDA Center for Food Safety): If anything, they potentially could have compounded the problem if they spread the contamination around or at least didn't eliminate the problem.

KAHN: And the concerns aren't limited to the processing plants. Researchers are also looking into the fields.

KAHN: He peels off the outer leaf, cuts out the core, and then tosses the lettuce up on the huge harvesting machine idling in front of him.

KAHN: He says that lettuce is now ready for a hamburger. But some experts worry that cutting and coring lettuce in the field may create more ways for the bacteria to get on or even inside the leaves. While health experts argue over how E. coli contamination occurs, the FDA is considering regulating the fresh produce industry.

So is the state of California. And Fresh Express, one of the largest bagged salad producers, has just pledged two million dollars to search for answers. Charles Sweat, CEO of Natural Selection Food, says all of that will take time. In the meanwhile, he says, consumers want assurances.

Mr. CHARLES SWEAT (CEO, Natural Selection): We're not going to wait for the science to validate what needs to be done. We're going to build our layers of prevention in place for our products today, because we think it's the right thing to do.

KAHN: Another thing may be to keep studying the fields of Yuma. University of Arizona's Kurt Nolte says the region is a natural laboratory to study pathogenic E. coli.

Mr. NOLTE: We haven't detected it in the hundred years that we've been growing lettuce.

KAHN: Short of bottling Yuma's weather and terrain, Nolte says other growing regions will just have to wait for science to decipher E. coli's many mysteries.